The woman who tweeted this out for all the world to see is a member of Congress. She a U.S. Representative for Georgia's 14th Congressional district.

And she's an idiot.

But, hey! Even idiots deserve representation, and her district certainly is well represented by her.

*Greene has since corrected the above tweet after someone told her to correct it.

Here are some other things this functioning illiterate has tweeted about:

• The QAnon conspiracy theory, which holds that Donald Trump is secretly fighting a worldwide child-sex-slavery ring that was supposed to culminate in the mass arrest of his political opposition, is “worth listening to.”

• Shootings at Parkland, Sandy Hook, and Las Vegas were staged.

• “Zionist supremacists” are secretly masterminding Muslim immigration to Europe in a scheme to outbreed white people.

And this gem in which she shows off her galloping ignorance: 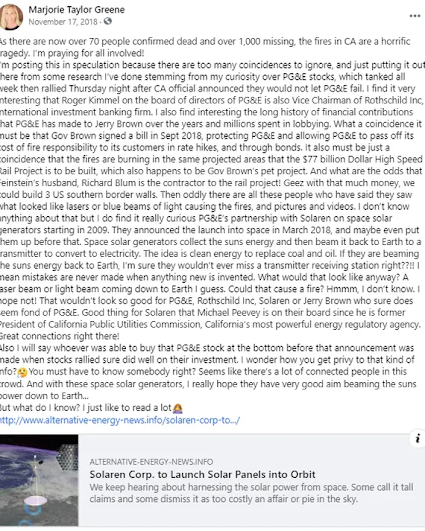 And it's not just the unfortunate people from her district in Georgia who admire this numbskull enough to send her to the U.S. Congress to make a fool of herself. No. She has admirers in the blogging community who believe she's all that.

Hearing of the DC coup against Trump. It was more than Milley and Joint Chiefs as NSA had to know, and as such CIA, DIA, FBI, and others in Congress. This shows treason by all and they are tied to China. We must vote out all existing in Congress except the few that are outcasts, like Republican Marjorie Green of GA. None have been arrested and will be. If they are not voted out it will likely be due to vote fraud and then the next step is CW2."

Those same people believe Donald J. Trump was the greatest president America ever voted into office and that the only reason he lost the election is because the "libs" got a bunch of aliens to fly their laser-spewing space ships to Earth so they could mail in millions of fake ballots for Joe Biden. They know this is true because those fake ballots had fibers inbedded in them that have been traced to Alpha Centuri. FRAUD! FAKE! ALIENS!

Those "patriots" wanted Trumpy to declare "Marshal Law." Maybe they think Eminem will then "reinstate" Trumpy by October?

Milley should get the Medal of Honor for his actions.

Yet more proof that there is nothing more stupid than a Trumper. Nothing.