Everything's bigger in Texas -- even the idiots!

Texas school official tells teachers that Holocaust books should be countered with ‘opposing’ views
"A North Texas school district apologized late Thursday after an administrator advised teachers that if they have books about the Holocaust in their classrooms, they should also include reading materials that have “opposing” perspectives of the genocide that killed millions of Jews."
Is there an opposing view on genocide -- one that justifies it? Is that what the nincompoop who said this means? What exactly did she mean? Are there more Texans who believe in garbage like this?
Is there a "bothsiderism" to genocide?
"The incident in North Texas is the latest example of how schools, educators and parents nationwide are clashing over what can and can’t be taught in the classroom. Much of the focus has been on the teaching of history, LGBTQ issues and race, specifically critical race theory — an academic framework for examining the way laws and policies perpetuate systemic racism. Conservative lawmakers and right-leaning news outlets have seized on critical race theory in recent months."
YOUR FRIDAY ROUNDUP OF GQP NINCOMPOOPS: 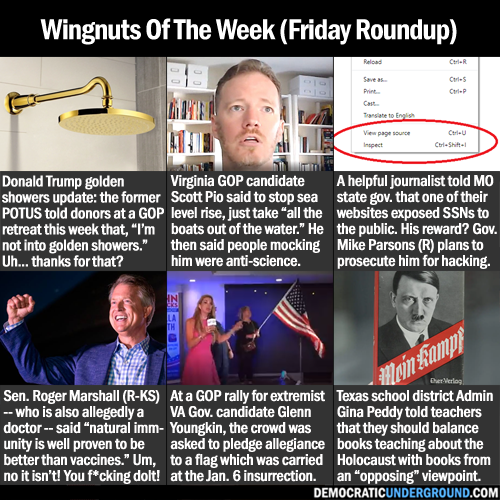 Is there a "bothsiderism" to genocide?

Well, Trump did say that the swastika-infested Charlottesville demo included "very fine people", and those "6MWE" shirts are being seen more and more at wingnut events, so who knows. Maybe they can just assign Mein Kampf to provide a "balancing" viewpoint and call it a day.

Scott Pio reminds me of a suggestion I once read that we could fight global warming by having everybody in the world open their refrigerator doors at the same time. Aside from the fact that he evidently has no grasp of the relative size of oceans and boats, I guess he doesn't realize that we need ships to, you know, get heavy stuff from one continent to another.

The evil people espousing this BS are rotten to their core. It is entirely likely that they secretly desire a rebirth of The Third Reich here in the USA. trump and sycophants immediately come to mind.

The question that comes to mind is why is CPAC having their conference in Hungary (scheduled for 2022), a country with an authoritarian as head of state? Why has the Trumpublican Party become enamored with Hungary?

"One former ACU chairman, Al Cardenas, told Salon he has no idea why the group is holding an event in Hungary, saying he hasn't "heard of any reason" for the venture.

Michael Edison Hayden, a spokesperson for the Southern Poverty Law Center, said he clearly saw a purpose behind the event.

"It's a threat," he explained, adding that Orbán's party, Fidesz, has "all but eliminated the free press, and have weakened democracy in that country to the point that it can't even be considered a democracy anymore. There is no reason to bring [CPAC] to Hungary unless that is a clear statement that that's what you want to do to the United States." --Salon

"Are there more Texans who believe in garbage like this?"
No matter how many, there are too many that believe this crap. I saw the teacher on the news yesterday. She wasn't saying much.

And our idiot governor here in Missouri going after the reporter is getting laughs on the talk show circuit. He doesn't have a clue what hacking actually is.

I think we all know the reason CPAC (CORRUPT POLITICAL ACCTION COMMITTEE) is holding their 2022 lie-athon in Hungary. Authoritarians are always more comfortable in the presence of other authoritarians.

Just a few weeks ago, in a post on "CRT" I was quickly dismissed by extremists at AOW because I said this could/would happen. Dave, I was told, you're essentially fear mongering. There's nothing in these laws that would support what you are alleging.

And yet, here we are. And those folks continue to claim these news laws permit nothing like, and no one would consider anything like this crowd in Texas is now doing.

It's like the day a few years back in my church when one of my friends was preaching. His message was to be on the hot button issue of immigration. He said he wasn't going to speak to the legality of immigration at all... but on how he believed that Jesus would treat immigrants, both legal and illegal.

His conclusion was that Jesus would treat them all with compassion.

There were people mad at him because they said, "He did not present the other side of the argument."

That's our question today... What other side?

What is the other side of treating people with compassion?

What is the other side of teaching that nationalism, combined with racism of Nazi Germany was bad, evil and racist?

None. None at all.

And yet today, in 21st century America, we have people openly siding with with the intellectual understanding of the Nazis. People wanting the understanding of "Volk" that the Germans had prior to and during WWII when they exterminated millions of Jews.

It's just this... what are now conservatives have become people enamored with evil concepts.

The Republicans are owned by alt-right, neo-confederate traitors.

Daniel Miller, president of the Texas Nationalist Movement tells Russian propaganda channel Newsmax why states should secede from the US.

Compassion and acceptance is also how the Buddha would have treated immigrants. Or all "others" as a matter of fact. As we are all interconnected we are, in truth, truly brothers and sisters.

The answers to most of the worlds most pressing problems, hunger, conflict, suffering, racial inequality, misogyny, income inequality, climate change... can be be and should be answered with compassion and the complete relinquishing of greed.

Unfortunately the west, especially the hyper capitalist society of the US of A, has a VERY long way to travel before we as a nation ever realize the truths inherent in Buddihism and Christianity.

Given that many Christians in the US of A are acting contrary to their own spiritual teachings it is going to be a very long journey. If it ever happens.

Just before and after the turn of the last century millions immigrated to the U.S. Eventually those people were absorbed into our country and actually made our country stronger. Yes, there were many sad stories, but that was at a time before safety net programs and when corporations were abusing Americans before the government stepped in and stopped those abuses. Back then we had our haters that also made life difficult for our new citizens. We are much more prepared and able to absorb thousands of immigrants today, than the millions that came to our shores back then. Of course, we have our haters today, who seem to be the only ones trying to create false fear against these new immigrants. As we did before, we must suppress these haters and help find a better life for these new citizens.

We can count the number of countries Christianity saved from fascism on zero fingers.
It's an authoritarian religion with little to do with their Savior's teaching or example.

Jesus was far more socialistic than Republican. "Render unto Caesar", "eye of a needle", "give to the poor", "the least of us" and "cannot serve two masters" is ample evidence.

The American radical Right want none of it. But they will declare they are Christians, despite the proof to the contrary. They believe in Trump and serve him, way more than "their Christ".

It just follows that they also think they are more victimized by racism than Blacks. Racism isn't racism to racists and a cult isn't a cult to a cult.