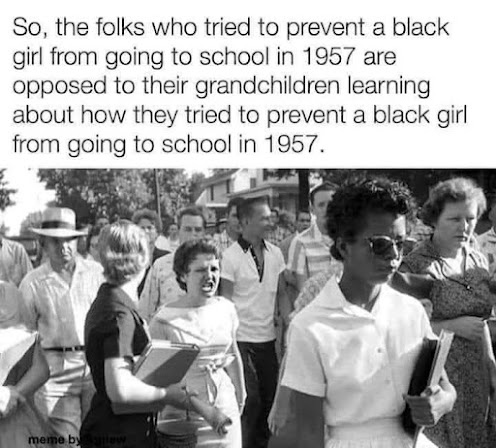 We've arrived at this point because apparently we must find a way to teach about the history of slavery here in the US without little Johnie asking his parents why they owned slaves in the past, why his church teaches that "Christian Slavery" was not as bad as it has been portrayed and why slavery is/was/and always will be evil and wrong. Full stop.

We've already seen in certain states, that while the law may not specifically prohibit lessons on the above questions, or the reasons behind school segregation, functionally, as evidenced by the North Texas School District you referenced in an earlier post, lessons are changing to salve potentially hurt feelings of angry white parents.

Because the truth of some of these issues is offensive to a large group of people who would rather forget, or sweep under the rug, the involvement and support their own families and close relatives gave slavery, lynching, racism and other misogynist views. A truth that served to maintain power and order within a small circle of largely white people in this country.

If the concept of the intrconnectedness of all sentient beings was understood and the altruistic act of loving compassion was practiced by all this nation, as well as the entire globe, would be able to solve and correct most if not all of our problems. We are by far more alike than we are different.

But, for many, the ego (unbridled self interest) is too powerful as they grasp for and cling to material "things" and power. As a wise yogi (Sadhguru) said, the greatest evil in the world is not evil itself. It is ignorance.

All this makes you wonder about any of the history you read.

Dave,RN, Mike, and Jerry, It's not just a matter of teaching our children about slavery, but they must also learn of the way our Native Americans were treated as well, and every other minority that came to this country to live and work -- they were all treated wit suspicion and contempt. But here's something else to think about -- this is how most nations behave, not just America, even though many Americans think this country is exceptional, the fact is that when it came to welcoming the stranger and the refugee, Americans for the most part acted like every other human being on the planet: with suspicion, fear, and contempt.

The thing is that when it came to descendants of slaves and our Native American population, they were not "strangers or refugees." The African Americans were brought here against their will and the Native Americans were, well, the First Nation. This country treated both abominably. And still does. And many sons and daughters of immigrants don't want to learn about that history because it would make them and their children "uncomfortable."

Our Constitution made us exceptional, but we've abandoned those ideals a long time ago because they're too much work and those ideals would mean all of us have to do some self-reflection on our own prejudices, hatreds, and fears.

It's easier to just separate ourselves from "the other," and pat ourselves on the back and yell, "USA! USA! USA!"

We need to have our children learn about the good and the bad parts of our history. And if that makes some "uncomfortable," so be it. That's a normal reaction to some of the horrible things that were done (and are still being done) to minorities in this "land of the free," this land of "liberty and justice FOR ALL."

Every white conservative racist will vehemently deny being a racist. They will say they "don't see color" and judge all people by the "content of their character". They will say BLM is a "Marxist racist" group. They will declare they are the "real victims" of racism. They will blame President Obama and other Black Americans for the rising racial problems in our country.

This is their political/cult indoctrination. And a cult isn't a cult to a cult.

To them a racist is the guy in the Klan robes or sporting a swastika, not the everyday bigots in the Republican Party, radical Right media, and in their very own social circles.

Dave Dubya, you are correct.

There's a far right blog Dave Miller and I read. They routinely refer to President Obama as a "Halfrican," which, of course is racist, since they label him according to his race. This same group refers to our first African-American and Asian vice president as "KamalaHO," which insinuates that she's a prostitute -- another racist label white people pin on women of color. I've read them referring to African-Americans as "monkeys." One of their more ignorant commenters refers to Muslims as "vermin." The Nazis referred to Jews as "vermin," because it is easier to hate people when you dehumanize them or when you call them deplorable names connected with their race or sexuality. And last, but not least, one of their elderly commenters who should know better, advocated killing President Obama, and the blog hostess let that stand.

They don't see themselves for what they truly are. And you explained why.

I've been comparing the rise of the American radical Right to the rise of German Nazis for years. The pattern of authoritarian white nationalism is more than evident.

But I've been on the receiving end of severe criticism for comparing them. Someone was very annoyed with me for that, and assumed I was equating the American Right with Nazis. I tried to explain the difference to no avail. Never mind the American Right HAS neo-nazis in their ranks, as shown in Charlottesville.

My defense of our point was never addressed by my accuser:

Could your accuser explain why CPAC is planning a conference in Hungary in 2022?


Viktor Orbán once stood courageously for the principles of liberalism. Today he is Putin’s closest ally in the European Union.

This is the guy the Trumpublicans admire:

"On March 30, the Hungarian parliament voted to allow Prime Minister Viktor Orbán to rule by decree indefinitely, giving him dictatorial powers for at least the foreseeable future. Orbán can suspend existing laws or enact new ones—all with de facto parliamentary approval and without a known end date. The law also criminalizes spreading false or distorted facts that interfere with the public safety or are “suitable for alarming or agitating” the public, crimes punishable by several years in prison. Concerningly, this language is vague enough to cover anyone who challenges the government’s preferred narratives and handling of the coronavirus. With lower courts already suspended and the path to the Constitutional Court unclear, it’s difficult to envision the legislation being challenged. As legal sociologist Kim Lane Scheppele writes in the Hungarian Spectrum, Orbán’s “emergency gives him everything he ever dreamed of: The absolute freedom to do what he wants.”

"After an initial term as prime minister from 1998 to 2002, Orbán reportedly determined that if he ever came back to power he would not be so easily removed. Upon reclaiming the prime minister’s office, he made good on his word. He packed the judiciary with Fidesz loyalists, redrew the electoral map and changed electoral laws, gave ethnic Hungarians who had never set foot in Hungary voting powers, gutted the civil service, appointed party loyalists to watchdog agencies, consolidated the media and amended the constitution."

Yes. The Trumpublican Party wants the US to emulate Hungary with Trump as our Orb.án

Trumpism IS fascism. If we had liberal, instead of corporate media, they would regularly let us know that, and they would remind us daily that Trump praised the terrorists on 1/6. "You're special. We love you."

Orban, Trump and Putin, are the authoritarian leaders the radical Right loves. If they lived in Germany in the 1930’s they’d be the first to swear loyalty to the Fuhrer.

My case was in these two posts:

I provided the US Holocaust Museum list of early warning signs of fascism:

He got mad at me, called me liar, refused to share the facts that would indicate my error, and left in a huff.

But I’m quite used to that behavior from those who can’t admit they might not have all the facts.

"If the 2020 election and the January 6th insurrection are becoming the 'New Lost Cause' of the GOP, Bannon wants to organize its new fascist apparatus.

Bannon was involved in the “Stop the Steal” efforts during the post-election period.
Bannon’s remarks on his podcasts on January 5 suggest possible foreknowledge of the next day’s disruptions: “You made this happen and tomorrow it’s game day. So strap in. Let’s get ready. All hell is going to break loose tomorrow,” he said. “It’s all converging, and now we’re on the point of attack tomorrow.”

On the days surrounding January 6, Bannon was apparently part of a clique of Trump advisers gathered at the Willard Hotel near from the White House. The participants in those meetings—Rudy Giuliani, Roger Stone, and John Eastman were among the others present—reportedly “discussed plans to stop or delay the January 6th counting of the election results and persuade Members of Congress to block the electoral count.”

As intriguing as the committee’s brief account is, it is worth noting that Bannon’s troubling activities did not stop after January 6. Far from it. He is still out in the streets, at rallies, on conference calls, and on his podcast trumpeting it to the heavens: The insurrection isn’t over, it’s only just begun."

We're not the only ones who see the Trumpublican Party slouching its way to Fascism.

I can add little other to say that racism, extremism, and oppression scurry in darkness, the darker the better. Add the light of truth, understanding and compassion and the three aforementioned will as surely die. Please excuse my awful form, grammar and observations. I had a small stroke a couple of weeks ago and I'm still very foggy and, in fact, today is my first day back online in over a week. My time is nearly over but you wonderful people have given me the gift of kindness and through your writings, I have hope that this country I love will indeed be saved. And RN, my friend; I tried very hard to stick around long enough to piss on trumps grave. I'm counting on you now, Buddy. :)
Peace and love