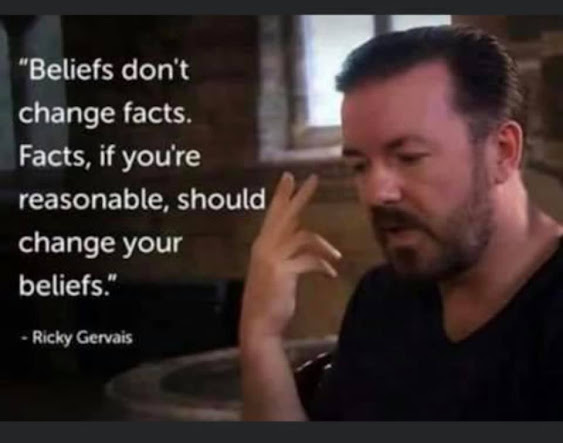 So true! That, however, requires one to be in touch with actual reality. Not the stories one tells oneself that are made up to support their illusions and or delusions. Something cons and trumpublicans do in earnest.

Repeat a lie enough and it becomes the truth.
The Republicans version of the truth has been going on for 40 years and they now believe every word of their truth.
Approach them with facts and they think you are lying. Their own people tell them their facts are wrong and they are convinced it's some kind of conspiracy theory.
You won't change their minds. They will simply have to die off. Their offspring will continue to spread their truths. We can only hope the majority believe in true facts.

Republican "facts" come with a facepalm at the end.

At the risk of being labeled a conspiracy nut, does anyone other than me think it's mighty suspicious that Facebook, Instagram and WhatsApp all owned by Zuckerberg, all went down when their head of global security was being interviewed on CNBC?

Perhaps it's just an interesting coincidence, but...

You're not the only one who wondered about that.

Minus FJ: real-ity... a fiction to prevent you from falling into the yawning chasm of the real. There is your real-ity and there is mine. ... You and I are the fictions. Reality is our individual fiction..

Facts don't matter, only narratives matter. If you can convince people of your preferred narrative, that becomes reality. As per Stephen Colbert, "A reality where, if enough people agree with a notion, it becomes the truth". (Source: Stephen Colbert defines the word "Wikiality" on the Colbert Report).

On the right they're still trying to sell their narrative that Dotard was framed re Russian collusion.

Derv The Minus FJ sock puppets are not interested in arguing about facts. They talk about talking, argue about the form of arguing, and when they've been proven to be wrong, they throw in Plato, or Žižek or something, anything, to deflect from their poor judgement in believing that the Fraudit in Arizona was anything but a circus performed by clowns that revealed, once again, Trump and his followers' treacheries, lies, and manipulations.

Minus FJ and the sock puppets are not interested in what's going on in front of their noses. They believe in talking about talking. And that's it.

debating a right winger is pointless. Much like teaching a pigeon to play chess is. In the end, no matter how carefully you teach it to play, he'll end up jumping on the board, knocking over the pieces, shitting all over everything and still strutting around like he won the game. Pointless.