One of the stories anti-CRT people don't want our children to learn. 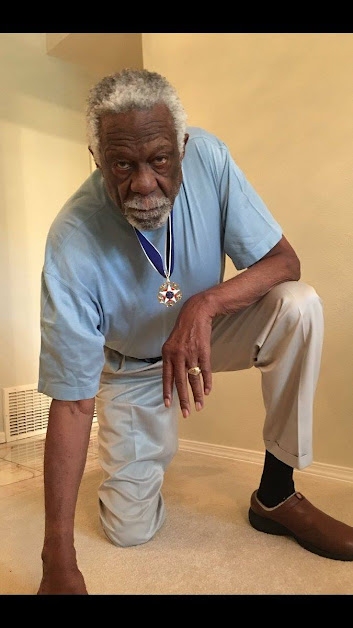 "A little history.
Back when America was 'great,' this man couldn't buy a house in my home town of Wakefield, Massachusetts. He bought one in Reading, next door, where one night a band of Americans broke in, stole his valuables, smashed his trophies, and shit inside the covers of his and his wife's bed.
Yes, shit on his bed.
And every game, he stood stoically for the anthem, looking around at thousands of white faces as they boasted of the 'land of the free and the home of the brave.'
I could live in Wakefield. But Bill Russell, the greatest player in the history of basketball, the man in this picture wearing his Presidential Medal of Freedom, couldn't.
Don't let anyone tell you there's no such thing as white privilege.
Don't let any government official, especially a president, tell you or anyone else when it is appropriate to stand, sit, or kneel in protest.
And most of all, don't fall for this MAGA bullshit."
The "bullshit" Bill Parent refers to is those who want to "Make America Great Again" and take America back to those "good ole days" (see the story above) and who believe teaching critical race theory (which is NOT being taught in public schools) is bad for America.
It isn't.
And stories like this one -- which happened in the North, not the South, need to be told, not to shame anyone, but to give our children the factual stories of how America treated/treats its minorities. Stories that are the truth.
I know this story quite well, since my sister and her family lived in both Wakefield and Reading. It's true.
But certain groups on the Trumpian far right are afraid of learning about how Americans of color were treated/are treated by their fellow citizens, so afraid that some of them have passed laws that prohibit teaching these truths in American classrooms. Here's one from Tennessee:
"(a) An LEA (local educational agency) or public charter school shall not include or promote the following concepts as part of a course of instruction or in a curriculum or instructional program, or allow teachers or other employees of the LEA or public charter school to use supplemental instructional materials that include or promote the following concepts:
(6) An individual should feel discomfort, guilt, anguish, or another form of psychological distress solely because of the individual's race or sex;"
***************************
The sad, uncomfortable fact for non-p.o.c. and non-gay individuals is that when they find out how p.o.c. and gays and/or non-binary Americans were actually tormented, tortured, and in many cases murdered, those stories DO make anyone hearing them feel "discomfort, guilt, anguish, or some form of distress."
But that has nothing to do with the race or sex of those learning this history, or feeling "guilty" about hearing the various histories of this country's racism and sexism. It is normal to feel shame about this part of our history.
The goal should be to get beyond that shame and regret and DO something, LIKE LEARN WHAT WE AMERICANS DID and to make sure succeeding generations do not repeat the dishonorable and contemptible treatment of our fellow Americans by our fellow Americans.
There's nothing wrong with learning the truth about one's country's history. What IS wrong is sheltering our succeeding generations from that truth.
AN EXAMPLE OF HOW TRUMPUBLICANS THINK: 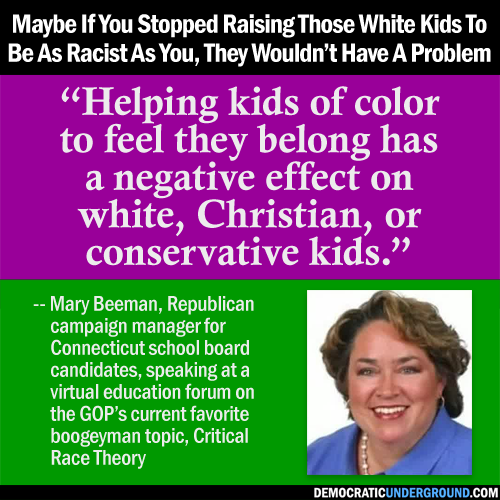 Their indoctrination tells them CRT is "Marxism".

To the rational mind, banning the study and teaching of the history and effects of slavery and racism IS systemic racism.

They will never understand. Racism isn't racism to the racist.

The greatest evil in the world is not evil itself, it is ignorabce.

And Dave is correct. They will never understand. Ignorance never does and never will.