EVEN WHEN SEN. OBAMA SHOOK HIS HAND 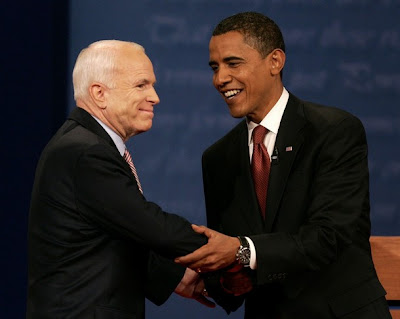 MC CAIN COULDN'T LOOK HIM IN THE EYE. A PICTURE IS WORTH A THOUSAND WORDS. THIS PHOTO SCREAMS OF JOHN MC CAIN'S CONTEMPT, AND CONDESCENSION TOWARD SENATOR OBAMA.

But the nation agrees that McCain's failure to be commonly decent said more about him and the sort of snarling, petty man he would be as president than it does about Senator Obama.

Senator Obama was dignified, statesmanlike, and decent.
Posted by Shaw Kenawe at 11:02 AM

Yeah I noticed that too and posted about that this morning and I used the same picture!! It does speak volumes doesn't it.

The Old Coot is a racist -- PERIOD.

I have articles about the Old Coot holding court with his GOP pals in the Congress as he told really filthy jokes about "n****rs" and "lesbians" and "Mexicans."

This is the type of man the Old Coot is and I detest him.

I'll be over to visit and read what you have to say.

I'm on my way to see what you've got. It's not difficult to believe that at his core, John McCain is a nasty, mean-spirited man. Wasn't his nickname McNasty while he was at the Naval Academy? I'll have to check.

Plus, there is the story out there, confirmed by journalists where were present, that McCain called his wife the "c" word during a presser.

He may have withstood those years as a POW, but so did many, many other men in the military. The only difference between them and McCain is that he never shuts up about it.

He exploits himself for sefl-promotion.

that should have been "who were" present.

I never use preview.