WHERE IN THE WORLD IS SARAH PALIN? 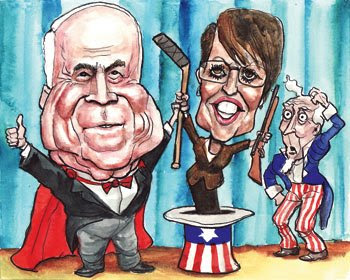 The two presidential candidates and the vice presidential CANDIDATE are scheduled to appear on the Sunday political talk shows: Meet the Press, Face the Nation, and This Week.

Where is Sarah Palin? She is the first candidate for the vice presidency in modern history to have gone missing.

Why won't she be on these traditional shows to answer questions?

She can make a great speech reading the GOP's talking points, but can she think on her feet and give cogent answers to difficult questions regarding the US economy, healthcare, the rising unemployment rate, energy, the wars in Iraq and Afghanistan, the Georgia and Russia conflict?

We will not have the chance to assess her knowledge and position on these vital issues because her handlers won't let her go in front of the cameras and the nation.
Why is that?
I'm going to put out my own theory.
She won't be on those talk shows to answer unscripted questions because she hasn't the knowledge to do so.
John McCain failed his first test as a potential president.
He nominated an attack lipsticked pitbull, but not a stateswoman with the ability to become the leader of the free world should it be necessary. The more she evades her responsibility to face the American people and explain her positions on the major issues, the weaker she looks.
Sung to the tune of "Frere Jacques":