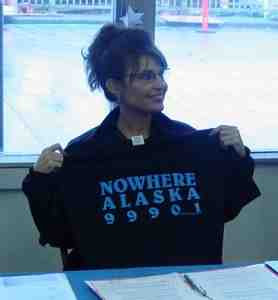 The photo is of Gov. Palin underscoring her support for the "Bridge to Nowhere," a project she has recently claimed she did NOT support. Gov. Palin doesn't alway tell the truth. That's called "lying."

Will Palin convince the independents, a group McCain needs in order to win? Will this GOP ticket, a ticket more conservative than Bush/Cheney, convince the country to turn even further right with their out-dated, mean-spirited policies of no sex education, book banning, and anti-science and with a VP candidate who mocks community service?

One other point. The RNC had reported earlier last week that they had already written a speech for McCain's VP pick, before he chose Palin, and that the speech writers had to "tweak" it to suit a female deliverer. We didn't see Palin for a week because she had to be coached and prepped to give the speech of her life, someone else's words.

Obama writes his own speeches--not some party hack.

Gail Collins of the NYTimes:

Palin’s speech totally swallowed up all the attention in St. Paul, leaving nothing whatsoever for speakers like Mitt Romney, who celebrated the convention Reform Day by announcing: “We need change all right! Change from a liberal Washington to a conservative Washington.”


Tragically, nobody seemed interested enough to point out that this made no sense. It’s a long way from the golden days when Mitt invented the “Washington is Broken” slogan, and people took the time to ask him exactly who he thought had done the breaking.


It’s been one big reunion in Minnesota for the old gang — Rudy and Mitt and Fred and Mike. Together again, for the first time since those primary debates. Reliving the golden days in which they managed to convince Republican voters that no matter what John McCain’s defects, he could not possibly be as bad a candidate as they were.


Did you see Fred Thompson? We had forgotten the electricity that is Fred until his speech on Tuesday, when he railed at the Democrats for overplaying Americans’ economic woes.


(“Listening to them, you’d think we were in the middle of the Great Depression.”) It was that same instinctive connection to the common man that had caused him to refer to the problems of unemployed Detroit factory workers as something that “you always find in a vibrant, dynamic economy.”

Reform Day was, of course, tailor-made for Palin, who is all about reform. Particularly, reforming the Republican party. Normally, in a democracy, the way you reform a party is by tossing it out of power until it learns its lesson and gets its act together. But the McCain-Palin plan is to reform Republicanism by keeping Republicans in control of the White House and most of the powerful posts in the federal government. That’ll show them.

Also fiscal reform. How many times have you heard McCain promise to slash taxes and pay for it by eliminating unnecessary programs? And who better to help carry out that agenda than the governor of a state whose residents pay less taxes than anyplace else in the union due to their genius in making the federal government pay the tab for virtually everything?

“Taxpayers have an advocate in Sarah Palin!” said Giuliani in his keynote speech. Rudy had been extremely busy all day. In a stroke of genius, someone picked him to run around to the TV shows before Palin’s address to defend McCain for picking her after having met her only once. When he was mayor, Giuliani hired people who had been in his inner circle since about the third grade. And most of them were terrible! So you see, there are lots of ways to screw up a big hire besides not thinking about it until the last minute.

For all her great skills at presentation, many people, including some Republicans who think the microphone is off, believe that Sarah Palin is a terrible choice for running mate. But you have to remember who the other options were.
Posted by Shaw Kenawe at 8:04 AM

You know, sometimes you put down facts to consider, and being a rational person, I have to listen.

But two sentences of yours have me scratching my head:

Will Palin convince the independents, a group McCain needs in order to win?

If you missed it (and I think you did based on your post) Sarah Palin was the choice that rallied McCain's base. Most conservative blogs have been effusing nothing but joy at the selection. McCain has been spending most of the time up to last Friday courting the independents. Picking the VP was not for that.

Will this GOP ticket, a ticket more conservative than Bush/Cheney, convince the country to turn even further right....[emphasis added]

I'm calling BS on this statement. McCain has been a moderate for years. If you hadn't noticed, his base has been pissed at him enough times on important issues that they were ready to walk away, let Obama win, and hope the country survives the next four years so we could get someone conservative.

And as for the country turning right, had it done so, this election would be wholly different.

Are you just upset that the GOP had a good chance of making history this year instead of your precious messiah?

I should have said independent "women."


Will this GOP ticket, a ticket more conservative than Bush/Cheney, convince the country to turn even further right--SK


I'm calling BS on this statement. McCain has been a moderate for years. PM

McCain is no longer considered a moderate nor a maverick. He's caved to the Radical Right and flip-flopped on issues he supported in the past--issues that independent voters agreed with him on.

He wanted Lieberman, but caved to the radical right and named Palin--that's not maverick behavior, it's called appeasement so that the base wouldn't abandon him altogether.

"McCain: He'd rather abandon his principles than loose an election.

I think we're going to learn a lot more about Palin over the next few weeks.

McCain is no longer considered a moderate nor a maverick.

Yes he is. He's been reaching across the aisle (caving) to liberals far longer than the has to conservatives. I for one don't trust him. You'll see depending on what he says in his speech. I'm sure I'll find things to criticize.

Did you miss her unveiling here in the great state of Ohio? Not a stutter, not an um. I'm personally waiting for the debate. I can see her invading Biden's personal space even.