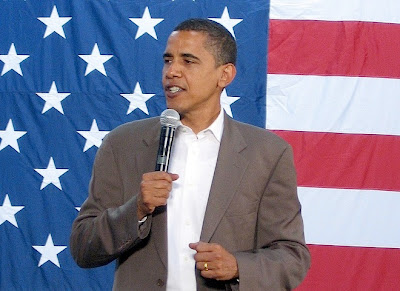 While the media is obsessed with the undereducated, anti-science, pro-Creationist Republicn VP candidate, Senator Obama is talking about how America can reclaim and shore up its leadership role in science among other western democracies.

"This is the first time we know of that a candidate for president has laid out his science policy before the election at this level of detail," said Shawn Otto, CEO of ScienceDebate2008.
A 38,000-member coalition of scientists, engineers and concerned citizens, ScienceDebate2008 pushed presidential candidates to attend to science -- an area that is vital to America's economy and touches on nearly every important political issue, but is generally neglected during elections.
Though unable to convince Obama and John McCain to engage in a full-blown science debate, ScienceDebate2008 winnowed 3,400 member-submitted questions down to 14 key challenges facing candidates and the country. Some, such as clean energy and stem cell research, are familiar from past elections. Others, such as water security and the systematic politicization of science, are new.

Obama's answers were released on Saturday and balance lofty rhetoric with policy-wonk detail -- not only on energy issues, which are a central part of his platform, but relatively esoteric issues as science education, bioterror and genetic privacy. "I thought they were very substantive for this point in the campaign, and surprisingly detailed," said Otto. Obama also appears to appreciate the process of science: He promises across-the-board doublings of basic research budgets, and pledges to reverse the ideologically motivated science-skewing that has thrived under the Bush administration.