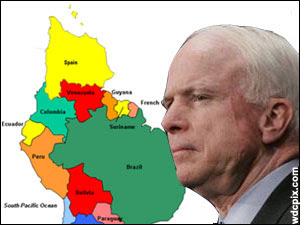 
In Sen. McCain's latest gaffe, he seemed to suggest that he might not be willing to meet with Spanish Prime Minster Zapatero because he is among those world leaders who want to harm America.


The story is already getting picked up pretty quickly in the Spanish press. And the way it's being interpreted in the Spanish press is that McCain got confused about the fact that Spain is a country in Europe, rather than a rogue state in Latin America.


In the interview, McCain is asked about Hugo Chavez, the situation in Bolivia and then about Raul Castro. He responds to each of these with expected answers about standing up to America's enemies, etc. Then the interviewer switches gears and asks about Zapatero, the Spanish Prime Minister. And McCain replies -- very loose translation -- that he'll establish close relations with our friends and stand up to those who want to do us harm. The interviewer has a double take and seems to think McCain might be confused. So she asks it again. But McCain sticks to the same evasive answer.

McCain appears not to know who Spanish Prime Minister Zapatero was and, in an effort to wing it, assumed he must be another left-wing, anti-American leader from Latin America.

All of the Spanish language speakers who've listened to the interview think there's no doubt that McCain just got confused and didn't know who Zapatero was or possibly didn't even know where Spain was.
Posted by Shaw Kenawe at 1:02 PM