Brought to the American people by CBS, and spread around the blogsphere by gullible bloggers:


"Another wowza from CBS News:  Florida Woman Sees Health Care Premium Jump From $54 a Month to $591 Under Obamacare."

But when the hyperbole, misinformation, and lies are cleared away, the truth emerges, and we understand that those who are the most opposed to the A.C.A. apparently have the least information about it.


"A visibly distraught woman who recently lost her health insurance plan because of the new requirements within the Affordable Care Act recently expressed her frustrations to CBS News. In a report about the number of people losing their health plans, in spite of assurances by the president, one Florida woman choked up slightly while revealing that she will have to pay more than $500 monthly for the coverage she previously paid just $50 for."


CBS' Jan Crawford took that information from Ms. Barrette and repeated it at face value with no investigation or followup. Poor, poor Ms, Barrette her insurance costs are skyrocketing by 10 times their original cost.

Obama Basher Extraordinaire, FOX News, Pokes Holes in Barrette's claims and shows what a shabby, half-assed  job CBS did in reporting them.   How soon do you suppose the right wing blog-o-sphere will go back and correct their reported hysteria?  How about NEVER?!

Report the misinformation FIRST and never check facts. That's how you grease the engine that's driving the TeaPublicans to make bogus claims about the A.C.A.

"Greta teed up the interview using the same setup as Crawford’s piece, that Barrette is “finding out she will have to pay 10 times as much for health insurance” because “she is losing her current plan to Obamacare.” “I have a copy of your Florida Blue insurance and it’s about $54 a month,” Greta continued, “and now I understand that under Obamacare, it’s going to go up, at least they said that the policy they would offer you under Florida Blue, would be $591; is that correct?”

Actually, the plan BCBSFL was only one of many plans Dianne has to choose from, 10 of which are cheaper than that $591, and based on her income, she’d only pay around $209 a month, but Greta did cut right to the chase about the quality of her old plan. “Your $54 a month policy is a pretty, you know, bare bones policy, “Greta said. “Why do you want to keep that one, except for the price? Maybe you can get something better with a subsidy?”

Ms. Barrette goes on to say that this 'insurance' is perfect for what she needs: a doctor visit copay and prescription copay, and maybe some outpatient services. It turns out that she actually had that reversed and the insurance company paid a $50 'copay' towards a doctor visit, and $15 for prescriptions, and she herself was responsible for all the rest of the costs.

The interviewee acknowledged no hospital stays were covered in response to Greta's question.

Now this is exactly the type of junk insurance Obamacare is meant to do away with, and it is not surprising that people don't know what their insurance covers. But a reporter with a major news outlet should have done some reporting and learned that.

So it should be of great embarassment to CBS to be shown up that way by Fox filling in missing facts in their story.

What is funny though is that a subsequent interview that was to take place on Fox News with Ms. Barrette, was cancelled, after Greta poked holes in the story."


How To Spot A Fake Obamacare Horror Story

Andrew Sullivan on the A.C.A.:

"The ACA also offers a real chance to bend the cost curve in healthcare. At its worst, it’s a start – and something that can be worked on as time goes by.

Every law can be amended. But what the ACA does at its core is bring everyone into the same boat – and a bigger pool is always better for insurance purposes.

That’s both a moral and a fiscal gain. I can see how it could be amended. At some point, we might be able to get rid of the employer subsidies and expand the individual market considerably. Or we could move to a single payer. But it will force all of us to grapple with this question more directly and more practically.

If you don’t see it as a panacea but as a baseline for the future, it looks better. What I’m saying, I guess, is that we should not miss the forest for a few rotten trees. If they get the website working, if more people get to sign up, if premiums remain below what was expected … then we will have a very different debate than we are having right now.

And look: this is the law. It’s not a project we can simply ignore. But it is a project we should see in perspective – which our current partisan brouhaha is obscuring." 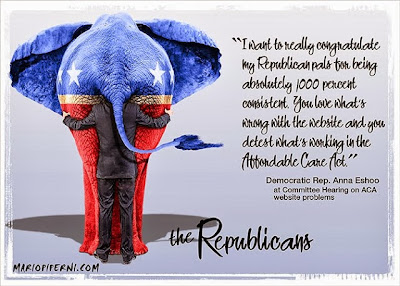 I have the following question for the naysayers-Does Romneycare work in Massachusetts?

Has it destroyed the economy there?

The unemployment rate there is below the national average.

Do Bay Staters hate it?

No, 60% approve of it. So, please explain why it won't work nationally.

What is different about Massachusetts?

Is it the air?

The beards on the Red Sox?

BTW, I did a bit of sleuthing and found out that the fake blogger, "Shaw KeeWee," whose feeble attempt at parodying me on conservative blogs is a complete dud, stole a young woman's image from "My Space," and put the name "Shaw KeeWee" on it and commented on con blogs.

The young woman's name is Lakeesha Shaw, and the low-life, who hasn't a clue on what humorous parody is, used her image without her permission.

Also, be advised that "Anita David" is roaming the intertubes commenting while using another woman's image.

read above comments....for the life of me.... I do not understand how trolling has gotten to be 'fun'.... I really don't.

“There's a hell of a distance between wise-cracking and wit. Wit has truth in it; wise-cracking is simply calisthenics with words.” - dorothy parkert

trollers do not get it... they seem to believe that going hunting with a fishing pole is good sport.....and they think that all they need is worms. sheesh

Their attempts at parody always fail because they lack the wit to carry it off. For example, the dumbass who tried to parody me with "Shaw KeeWee" put up an African-American woman's photo that was suppose to represent "Shaw KeeWee."

In that dumbasses pinbrain, representing me as an African-American is supposed to be what? Funny? An insult?

So there you have their stupidity and racism that tries to pass itself off as wit.

The devout cowboy lost his favorite Bible while he was mending fences out on the range.
Three weeks later, a duck walked up to him carrying the Bible in its mouth.
The cowboy couldn't believe his eyes.
He took the precious book out of the duck's mouth, raised his eyes heavenward and exclaimed, "It's a miracle!"
"Not really," said the duck. "Your name is written inside the cover."

What is different about Massachusetts?

c. The beards on the Red Sox?

Don't get me started, Ducky. Our friends on the rightwing blogs love to poke fun at Massachusetts and Boston, but the FACTS don't support their mockery.

"In the 2000s Boston's professional teams had arguably the most successful decade in sports history, winning 8 championships by the Patriots, 3 by the Red Sox, and 1 each by the Celtics and Bruins).

When the Bruins reached the 2011 Stanley Cup Finals, the city of Boston became the first city in the 21st Century to have all four of its major professional league teams win a league championship, and it is the only city ever to have championships in all four major professional leagues within a ten-year span (from the Patriots' victory in February 2002 to the Bruins' in June 2011).

In just ten years, between February 2002 and June 2011, Boston's teams completed what Sports Illustrated dubbed as the "Grand Slam of North American sports"

Now add to that the 2013 World Series Championship.

We also have one of the lowest unemployment rates in the nation. The lowest divorce rate, among the lowest out of wedlock birth rates, the highest number of post-graduate degrees, and our students lead the nation in math and science scores. We led the nation in equality in marriage. 97% of our citizens are insured--thanks to a REPUBLICAN governor who instituted ROMNEYCARE! That's just to mention a few areas where Massachusetts/Boston is a leader.

Is it in the water? No. It's in the politics: We're a liberal state and we believe in liberal ideals.

That, and the beards of course.

Their minds are diseased. Some far right, extremist whack-a-doodle actually wrote this:


"Could the Kenya attack happen here? It did"

Yes, on January 20, 2009 a Kenyan, Muslim named Barrack Hussein Obama assumed the office of The President Of The United States Of America. While this was a bloodless event it will prove to one of the most disastrous occurrences befall this Nation in its history. Think of it as a puss filled sore, on the surface, erupting from an internal terminal disease."

The crazy person who wrote that President Obama is worse than all of those American tragedies is representative of how corrupt the Republican Party has become, not just corrupt, but totally gone mad in the head, because no sane person writes things like that.

The guy's nuts, but their party is chock full of people like him.