Why does a political party and those who favor its ideology make ridiculous choices that reinforce its lousy image of the mean-spirited party of NO!?


“Catch An Illegal Immigrant” Game Planned For University Of Texas

Lorenzo Garcia, chairman of the Young Conservatives of Texas, announced the game will involve students tracking down other students tagged as “illegal immigrants” in exchange for $25 gift cards.


The Young Conservatives of Texas, led by Lorenzo Garcia who once interned with, guess who?  Ted Cruz, canceled this hideous idea after attracting so much negativity and scorn.  But the question is what inspired this lamebrain idea in the first place? Was it a plan to attract approval and praise from Uncle Ted?


On to Oklahoma and another Republican politician who believes in making people's lives miserable as a solution to laws she doesn't like:

"Oklahoma Gov. Mary Fallin (R) announced earlier this month that state-owned National Guard facilities will no longer allow any married couples to apply for spousal benefits, regardless of whether they are same-sex or opposite-sex.

The Supreme Court’s decision overturning the Defense of Marriage Act means that servicemembers with same-sex spouses are now eligible for federal benefits. Fallin’s unusual tactic is designed to avoid having to recognize those couples, which she asserts would violate Oklahoma’s constitutional amendment limiting marriage to one man and one woman:

FALLIN: Oklahoma law is clear. The state of Oklahoma does not recognize same-sex marriages, nor does it confer marriage benefits to same-sex couples. The decision reached today allows the National Guard to obey Oklahoma law without violating federal rules or policies. It protects the integrity of our state constitution and sends a message to the federal government that they cannot simply ignore our laws or the will of the people.

This decision directly contradicts an order from Defense Secretary Chuck Hagel ordering states to provide same-sex couples with the federal benefits they deserve under the law."


Hey Gov. Fallin, how is this nasty piece of deception protecting the rights of the minorities in your state?  In order to impose Oklahoma's majority's dislike of marriage equality, you will now use that anti-gay sentiment to punish ALL deserving National Guard families?  That way, the not-gay families can blame not receiving their benefits on the same-spouse couples? Is that how you're working this?

PS.  This is another wretched move on the part of a political party that seems to relish hurting people, even those who serve their country. 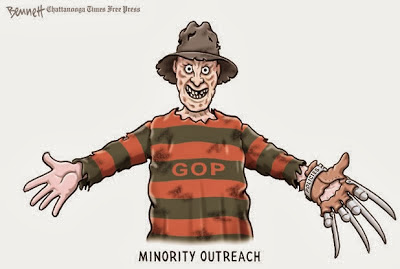 And let's not forget this: 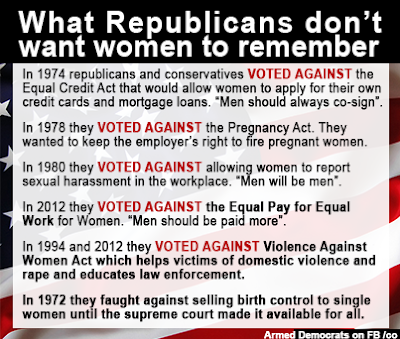 And the Tea Party extremists continue their treasonous blather.

This time unhindered on social media:

We now have authority to shoot Obama, i.e., to kill him. His willful violations and alienation of our Constitution, constant disregard for our peaceful protests and corruption of all the three branches of government, (i.e., rogue and illegitiimate government), reveal the dictator that he is. Obama and his co-conspirators disrespect our Constitution (constitutional rule of law) and abuse the Americ...See More

You lambast the republican because they stand by their beliefs, even if you don't agree.

It seems the current democrat in charge can list lying as a strong point.
He has from the beginning said he will change America and take from the middle class, small business, and give to the poor.
He is trying to accomplish this but keeps getting caught in his lies.
I will reduce taxes for 95% of all Americans = Lie
If you like your health insurance you can keep it = Lie
If you like your doctor you can keep them = Lie
I wasn't told there was a problem with the ACA roll out = Lie
I will shut the government down before I delay the start of the ACA = That he told the truth because he shut it down

The move by Gov. Fallin has, ah, really got to me. I cannot concieve of a sane person, let alone an elected official, stooping to such depths. Sounds more bullshit akin to ex-Gov Palin's ranting. (oh, by the way, The Half-Baked Alaskan has a new book out about Xmas. . the reviews make much better reading than the book,so far. one described listening to an audio "listened to all four-and-a-half hours, which is technically not a violation of the Geneva Convention if you're getting paid to do it, New York's legal team insists." http://nymag.com/daily/intelligencer/2013/11/sarah-palin-war-christmas-book-good-tidings-great-joy.html )

be careful,Shaw...you may not be a people too. sorry for being windy. not feeling people-ish.

It's possible that these folks represent the definite plurality that is going to influence the Republican presidential nomination.

"Half-baked Alaska" - got a laugh.

Keep on keeping on and try to keep laughing. Their time is fading.

Twilight of the Baggers continues.

They've even pushed Mr. Milquetoast too far.
Stick a fork in them.

Skud, you have chosen to accept the worst interpretation of President Obama's actions. I for one, always preferred to give President Bush and his admin, the benefit of the doubt when it came to these types of situations.

I will give you that President Obama has not been accurate with his statements and I can see how people can say he lied.

Those statements do not make for reasoned debate.

As for standing up for their ideals, sorry, but your response is a bunch of BS.

Where was the respect from the GOP when the Dems did so in opposition to the Iraq war? No one, not one single partisan in the GOP said they were honorable in their opposition, much less the blogosphere.

For 8 years when the Dems dared differ on policy from the GOP, they were called traitors and UnAmerican.

Why should things be different now?

David
If knowingly misrepresenting the truth is not a lie, what is it?

I don't blame obama from lying because if he told the truth he would never have lost won. Now it comes out he had help with the unemployment drop a month before the election so the corruption runs deep.

If I remember there were some prominent democrats that voted for the attack on Iraq. I was not for it and was in the best of light with some friends but I stood up for what I believed in and ignored the jabs.