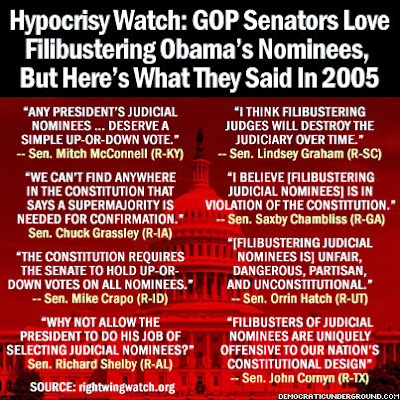 And why there's gridlock in government:
The GOP's strategy?  Unprecedented Obstruction. 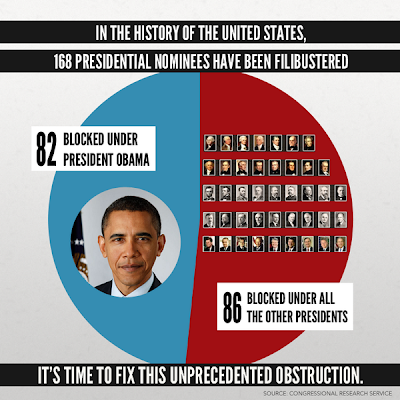 Congratulations to Harry Reid and the Democrats for stopping the obstructive, destructive, do-nothing GOP.
From USA Today:
"Democrats' decision Thursday to change Senate rules so they can confirm presidential nominees without Republican support is sure to worsen partisanship in a body that is already dangerously dysfunctional. Republicans instantly promised to retaliate, and important national business — the current budget negotiations, for example, or attempts to head off another government shutdown — could suffer. Even so, the Senate's GOP minority brought the rules change, known as the "nuclear option," on itself. The Republicans' repeated abuse of the filibuster to block highly qualified nominees simply because they were picked by a Democratic president had left Senate Majority Leader Harry Reid, D-Nev., with little choice."

Apparently The Hindenburg of Gas Bags, Limbaugh, had a melt down over the change in the Senate rules.

Anytime that seething pile of bigotry and hatred is made uncomfortable and p.o.'d is a great day for America.  And it means something good has happened.

Didn't Skudrunner deny there was any obstruction taking place? I wonder if he will make that argument again. And I wonder if he -- or anyone who says there is no obstruction -- actually believes it. That the Republicans got together and purposefully decided to sabotage this president and damage the economy (and thus cause real pain for many Americans) is well documented. Also morally treasonous, IMO.

Poor Mitch McConnell, for his own safety he had to surrender the car keys.

Rush: There's a reason his nominees were filibustered. They're all extreme leftists who are unqualified. They would not be good for the country, and that's why they were filibustered. That's the built-in protection that the rule was for, and this bunch of statist authoritarians didn't like it, so, as far as Obama's concerned, this is Venezuela.


He's going to pop a vessel.

The narrative lives on, and on, and on... Now off to Free Thinke.

Limbaugh is a liar and a provocateur who makes his living off of his audience's gullibility and low information.

I always get filbert and filibuster mixed up. I guess because they are both nutty.

had to say it.

I always get filbert and filibuster mixed up. I guess because they are both nutty.

had to say it.

The rules still apply equally. When the Republicans have majority, they will get their nominees without obstruction.