The Trumper loses to Cruz in Wisconsin: 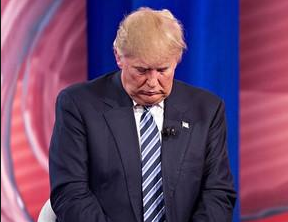 POLITICUSUSA:  "Sarah Palin’s horrible appearance as a surrogate for Trump at a Milwaukee Republican event made it clear to one and all that Wisconsin was not going to be Trump country.

Donald Trump’s campaign has always had a by the seat of the pants ad-libbed feel, but Trump’s winging it mentality came back to bite him in Wisconsin, where the state’s educated electorate showed no patience for Trump’s antics. Make no mistake about it,

Ted Cruz’s victory in Wisconsin was really a vote against Trump. The Never Trump Republican movement got a much-needed shot in the arm. Donald Trump is not unbeatable, nor is his nomination inevitable."


In other amazing, really greatTrumpian news, he explains to the Washington Post's Bob Woodward why Abraham Lincoln succeeded:  It's because he did something IMPORTANT!

The Trumper gave an answer to Bob Woodward's question on why President Lincoln succeeded just like a beauty pageant participant would have given an answer.

It's an answer that's full of words and phrases but does not address the question at all, because it's very likely that the only thing The Trumper knows about Abraham Lincoln is that his image is on the U.S. one cent coin.

TRUMP IS THE MOST DISLIKED CANDIDATE SINCE POLLS HAVE BEEN TAKEN IN PRESIDENTIAL ELECTIONS:

Mr. Trump is so negatively viewed, polls suggest, that: …he could turn otherwise safe Republican states, usually political afterthoughts because of their strong conservative tilt, into tight contests… without an extraordinary reversal — or the total collapse of whoever becomes his general-election opponent —

Mr. Trump could be hard-pressed to win more than 200 of the 270 electoral votes required to win. Here’s more ominous news for Republicans to be gleaned from the story:

Among women, nonwhites, Hispanics, voters under 30 and those with college degrees – those who represent the country’s demographic future – Trump is wildly unpopular. He’s viewed unfavorably by a 2-to-1 margin by each of those group.

Among independents, a group that Mitt Romney carried even as he lost to President Obama in 2012, Trump’s favorability rating is 19 percent while 57 percent view him unfavorably.

Among white women, a bloc Governor Romney easily won even in defeat, Trump is viewed by less than a quarter of them (23 percent) favorably while well over half (54 percent) have an unfavorable opinion of him.

Half of all voters said they would be scared if he were elected president, according to the Times/CBS poll.

Trump is viewed unfavorably by a majority of whites without college degrees, a group that has been his strongest demographic.

According to several polls, Mr. Trump trails Mrs. Clinton by 20 or more points among women.

The largest gender gap in the last 36 years was Bob Dole’s was an 11-point loss among women against Bill Clinton in 1996.

“There is no precedent for this,” said Neil Newhouse, a veteran Republican pollster.

“In the modern polling era, since around World War II, there hasn’t been a more unpopular potential presidential nominee than Donald Trump.”
Posted by Shaw Kenawe at 1:00 AM

"Former Republican vice presidential nominee Sarah Palin posted a photograph Sunday of her posing with a dead boar in an effort to convince Wisconsin voters to support Donald Trump ahead of the state's GOP primary Tuesday ...
"Faith of America is in you to take us forward on Tuesday; to remain strong and independent of the status quo political establishment so your vote will truly represent your optimistic spirit and desire to WORK!" Palin wrote. "Vote for Donald Trump on Tuesday to make America great again.""

-------------
Chris Christie has been avoiding this sinking ship, hasn't he.
Now, we can sit back and hope for a very contentious convention,

I've been told that certain characters with very red and rusty posteriors are on suicide watch after Wisconsin.

The Trumper is not going to go gentle into that good-bye in Cleveland.

With a contested convention now a 76% possibility, according to most polls, i've finally decided to take my meager income and invest ALL of it in popcorn futures. This is going to be a very bumpy ride for the Repubs, no matter what, at this point. Everyday is like Christmas for progressives such as myself and I'm loving each and every second of it! lol. I know I should feel bad for our Republiclown friends and neighbors but - dammit - they brought all of this on themselves and so I do NOT feel badly for them. Not one bit. If they'd reigned in the crazies and the kooks and the cranks in their party years ago. If they'd even once said, "No, that conspiracy theory is false and we know it and we're just spouting in in some desperate attempt to make the other side look bad." or "I know President Obama was born in Hawaii and is a Christian but I'm going to go along with the nutbags in my party anyway," then perhaps I'd have some small bit of sympathy for them. They didn't and I do NOT! America will be far far better off without the right wing death grip they've held on us all for many years and I can't wait to see what America can and will do without that bunch constantly screwing up America.
Republiclowns --- carry on full steam ahead! I fully support your political suicide.

Good heavens, that Lincoln answer is terrible. A ten-year-old could have done better. How does this man manage to be so ignorant?

Trumps Lincoln statement looks like something a 4th grader writes when he's not done his homework and needs a report 3 pages long on Lincoln. This is his opening gambit.

Ducky, here's a couple of beauts from Palin's Wisconsin speech Tuesday... Maybe you or Shaw can diagram them for me...

"This awesome awakening, the shifting and sifting...”

"How does this man manage to be so ignorant?"

Answer: It comes naturally to him.

BlueBull, Yes to what you wrote, but I'm afraid The Trumper's loyal supporters don't see him as a loud-mouth buffoon but rather someone they are proud to have represent them as their leader and the leader of the free world. There's no accounting for taste or intelligence, is there.

Maybe the tide is turning and donnie is on the way out. I still don't like Teddy but if is is between Teddy and -H- I will choose moving to the Cayman's.
I am still all about Bernie and hope he is the non-democrat nominee for the democrat party. It is ironic that -H- is having to battle a non-democrat for the democratic nomination. Just shows that neither party has much to offer.
I am think about going back to school and get my PHD and with Bernie I wouldn't have to pay for it, or anything else for that matter.
Palin only matters to Palin so she is truly a non topic.

"He did something that was a very important thing to do, and especially at that time."

That's pure Palian gold. So Shaw, once Trump is officially "pining for the fjords" do we get a Cruz Booze Day or what?

Oh yes, for anyone who missed it, LGM has posted a great clip by Ray Stevens.

Shaw... let me add that as mixed up as Palin is regarding the English language, her political views, and any potential leadership position in a Trump Admin, a position I've seen many conservative bloggers pine for, she in no way deserved the recent outburst from Azealia Banks calling for her to be gang raped.

The young female rapper was responding to a "statement" from Palin that was posted on a satirical news site, believed it to be true, and went ballistic.

It was a horrible misogynistic rant that was 100% over the top and offensive.

Good heavens, that Lincoln answer is terrible. A ten-year-old could have done better. How does this man manage to be so ignorant?

A better question is how has this man managed to be so successful, both in business and recently politics?

My answer, because of a lot of apparently naïve people.

As to his answer, Many 8 year olds are more articulate.

Dave: "Shaw... let me add that as mixed up as Palin is regarding the English language, her political views, and any potential leadership position in a Trump Admin, a position I've seen many conservative bloggers pine for, she in no way deserved the recent outburst from Azealia Banks calling for her to be gang raped."

Dave, I hadn't heard or seen anything about this so I had to google it. Of course it is outrageous and barbaric for anyone to wish rape or any other assault on anyone. I've never heard of Azealea Banks. I don't keep up on pop culture.

But I will remind anyone who comes here and reads these comments that one of Lisa's boy friends over at WYD blog wished me to be gang raped a few years ago (I have his comment saved) -- and not because her "Radical" friend read some fictitious remark I made, but because he doesn't like my political beliefs. I also understand from friends who emailed me that a blogger wished Hillary Clinton death from a horrible accident or disease today. So, Banks isn't the only one who wishes disease, rape, and death on people she dislikes. This happens on an almost daily basis on the internet, mostly by low-class, low-intelligence trogs, but not exclusively.

I put up a blog post on the sort of pornographic email I was sent by the same jerk who wished me to be gang raped.

Palin isn't the only woman who's been attacked with sexually explicit threats -- sadly she won't be the last so long as idiots like Banks and others stalk the internet and Twitter.

RN: "A better question is how has this man managed to be so successful, both in business and recently politics?"

"When a candidate for public office faces the voters he does not face men of sense; he faces a mob of men whose chief distinguishing mark is the fact that they are quite incapable of weighing ideas, or even of comprehending any save the most elemental — men whose whole thinking is done in terms of emotion, and whose dominant emotion is dread of what they cannot understand." -- H.L.Mencken

Please clarify. Which one is the dead boar?

Lincoln did this very vital something, which was a something that he is remembered for, and because of that something we consider him a great president, which is also something. I can't tell you what that something was, but I can tell you this, it was something.