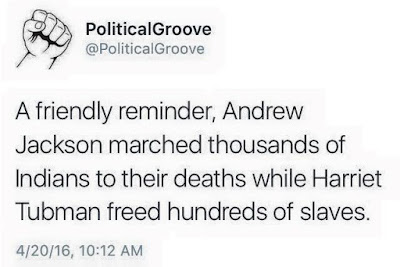 
Yes is right. Harriet Tubman was a Christian, a Republican, and a gun owner, what reason could the TGOP be against having her on the $20 bill to replace Democrat Jackson? Hmmmmmmm?

Hank... you should ask Pat Buchanan... he's pretty adamant in his support of Jackson... at least in a recent Op Ed piece...

If I have to ask Pat Buchanan, I already know the answer.

She's an EXCELLENT choice and I'm happy the genocidal murderer is being taken off our currency, Finally!

Bluebull, we can count on the rabid right to be against anything and any change that happens during Barack Obama's presidency. They are blind-sick with hatred for him and it seems to be their raison d'etre. Imagine that kind of a life driven by hatred.

Here's a comment I saw essentially saying they are even aware of their hate... And how they see what he does as wrong, simply because he is him... Period...

"Obama’s hideous; dining with the Queen, then the Cambridges…what luck. what a jerk.I suppose I’d be thrilled if a president I liked was doing that, but it IRKS me that Obama is….that they seem to like him so much….If they only knew."


The Republicans and Trump are saying that putting Tubman on the $20 bill is nothing more than PC.

The whole basis of libertarianism and republican thought is that you don't have to regulate anything, including discrimination, because market forces (meaning the public) will force change.

Well, here it is.

But the RESULT is not what they want, they expected something different. This has been a slow growing process for years. From not being able to use the 'n' word openly at work (or family for that matter) without people recoiling and walking away, to Disneyland offering a 'gay day', to gay marriages being performed, the cultural warriors have been in retreat. Now people are demanding trans get to use the bathroom. Not to mention the portrait of a black POTUS that will soon be hanging in the WH, forever.

They are losing, they know it, they are going crazy.

That's what their anger is about and that's what Trump is about.

Dave, as is usual with those folks, they're on the wrong side of history. Also, the Brits LOVE the Obamas. Hes very popular there.

"If they only knew?" What? The sick hatred they hold in their hearts? IMO they could all use some deep therapy.

I don't see how there can be serious dissension over this decision but there is a certain segment
of America which never fails to revert to form.


My dears, I ardently support sweeping changes in symbols, slogans, and terminology so that our friends, the chronically displeased Conservatives, can protest them, thus proving to the world that they are morally superior.

Conservatism has always been about symbolism over substance (Regard Monsieur Trump, for example. They have fallen for an impudent scoundrel because he tells them lovely fables.)

We are most amused that the proposed placing of Harriet Tubman's image on the $20 bill has given them another reason to tell the world that America is doomed.

Stay calm and carry on America. And enjoy a Pimm's Cup.

If old Harriet has the cons upset, maybe tehy prefer one of their real heros? LIke maybe Nathan Bedford Forrest?