"Glenn Beck stated, "Obama is skipping out on a Memorial Day ceremony at Arlington Cemetery because he'll be in Chicago on vacation. I'm sorry, I don't ever, ever question the president's vacation. I didn't under Bush, I didn't under Clinton, I don't under Obama." He later stated: "I have no problem with the man taking a vacation. But I am sick and tired -- sick and tired -- of people believing the lie that this administration has respect for the police or has respect for the soldiers of our country. I'm tired of it." [Premiere Radio Networks' The Glenn Beck Program, 5/25/10]


OTHER PRESIDENTS WHO HAVE SKIPPED ARLINGTON MEMORIAL DAY CEREMONIES:

Posted at The Conservative Media blogspot:

"In 1983 Deputy Secretary of Defense W. Paul Thayer laid a wreath at Arlington Cemetery during the Memorial Day ceremony, according to a May 31, 1983, Washington Post article. The AP reported that President Reagan attended a "summit meeting in Williamsburg, Va., with leaders of the industrialized democracies.

Vice President Dan Quayle laid a wreath at the Tomb of the Unknowns at Arlington National Cemetery on Memorial Day, according to a May 26, 1992, Boston Globe article. The Globe reported that President George H.W. Bush attended a wreath-laying ceremony and made brief remarks at an American Legion hall in Kennebunkport, Maine, where he also played a round of golf."


"I guarantee this; Soldiers, Sailors and Marines killed in battle are not just buried at Arlington, and their ultimate sacrifice is just as great as those buried at Arlington."  --Blogger Kevin Shopshire at The Conservative Media

AP: Obama "scheduled to participate in a Memorial Day ceremony" in Illinois; Biden to lay wreath in Arlington National Cemetery.

A May 24 Associated Press article reported that during a "long holiday weekend in Chicago," Obama "is scheduled to participate in a Memorial Day ceremony at Abraham Lincoln National Cemetery in Elwood, Ill."

The article further reported, "Vice President Joe Biden will participate in the customary wreath-laying ceremony at the Tomb of the Unknown Soldier at Arlington National Cemetery outside Washington." 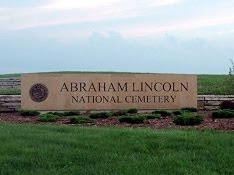 MR. OBAMA WILL PARTICIPATE IN MEMORIAL DAY SERVICES HONORING OUR MILITARY DEAD BY ATTENDING A WREATH-LAYING CEREMONY AT THE ABRAHAM LINCOLN NATIONAL CEMETARY FOR VETERANS.
President George HW Bush attended NO ceremonies at Arlington National Cemetary on Memorial Day during his four years as president.

During his 8 years as president, President Ronald Reagan MISSED FOUR SERVICES at Arlington National Cemetary because he was not in Washington DC on Memorial Day.

Source:  Snopes.com
Posted by Shaw Kenawe at 7:30 AM

Mr. Obama is an honorable man.

His approval numbers are quite good, and that is what irritates the right more than anything.

Isn't it a shame we have to constantly put up comparisons so the right can apologize for their stupid lies? Oh wait, they don't apologize, silly me....

Anon is correct, President Obama is indeed an honorable man, as is his whole family. We could not ask for more at this time...God Bless our president, our soldiers and the USA!!!

Everytime the Right goes apoplectic over an action by this president, we all find out that it has been done in the past by other presidents and that no controversy existed.

Theis Memorial Day nonstory is an example, another is the nonstory oveer Sestak.

Remember when the spittle fleckers went postal over a photo of Mr. Obama with his feet up on his desk? And then we found out that he isn't the only president who dared to do that?

The gnats on the Right--Malkin, Beck, Hannity, Palin, Coulter, and Limbaugh, etc., make their money by attacking every action this president takes--it's what gives meaning to their vacuous lives.

I just wonder what the Republicans will say against the Lincoln Cemetery. I'm sure in their infinite wisdom they'll find something.

The malcontents on the right felt it was necessary to criticize the president for attending Memorial Day ceremonies at a national cemetary in Illinois because their job is to make people believe Mr. Obama doesn't respect the military.

It's to be expected coming from the same people who called into question and mocked Sen. Kerry's purple hearts.

they are despicable people, plain and simply, despicable. They have made it their job to discredit, denounce, demean, and defame our dear President Barack Obama. So be it, they are irrelevant morons..

"Citizen": Obviously you didn't read the post and the part about Bush I and Reagan. But I guess your high moralistic principles only apply to a black president. What a pathetic pile of road apples you are.

This is boring. The event was rained out anyway. If he had been serious, they would have had an alternate place available to hold it indoors.

The event was ill conceived and not thought out... This is typicial for the libs.

PS, I am not defending other presidents who skipped out of the event too. One thing about Bill Clinton, who I did like but would not vote for, is that he made it all eight times.... Bill was a gem of a guy, but as a political leader and husband, he sucked....

Yes, Bosun. I'm sure a Presidential visit requires no advanced planning by anyone involved.

You'll do anything to make Obama look bad, won't you?

Shaw: I think the same spickle flatters go ape over him supposedly not wearing a complete suit.

I don't think it matters even if a President wears a T-shirt and jeans. Why should it matter what he wears?

Bosun: If it's so boring, why did you bother leaving such a petty comment?

I deleted "Citizen's" comment because it was nothing but a troll rant, totally without merit, and incoherent as well.

There is no story or controversy here. The president attended ceremonies at a national cemetary to honor the military dead on Memorial Day. It was rained out. End of story.

The sad little people on the right who have to make an issue over every single action this president takes continue to make themselves look like carping malcontents who are consumed with envy and anger.