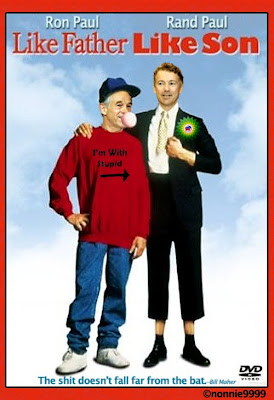 "In light of Rand Paul's decision today to back out of his scheduled appearance on Meet the Press, it's worth looking back to his father Rep. Ron Paul's appearance on the show in 2007 -- in which Ron Paul came out against the 1964 Civil Rights Act on the very same grounds that have gotten Rand Paul into such a mess this week.

That's the same libertarian position articulated by Rand Paul on Rachel Maddow this week: that the section of the legislation that allowed the government to bar racial discrimination by private institutions like businesses was wrong.

Paul responded: "But when it comes, Tim, you're, you're, you're not compelled in your house to invade strangers that you don't like. So it's a property rights issue. And this idea that all private property is under the domain of the federal government I think is wrong. So this--I think even Barry Goldwater opposed that bill on the same property rights position, and that--and now this thing is totally out of control. If you happen to like to smoke a cigar, you know, the federal government's going to come down and say you're not allowed to do this."


I thought this person at the TPM site posted a great comment answering someone who said the government can't legislate what's in the human heart, i.e., racism:

"By refusing to serve blacks, restaurant owners and other business owners weren't just exercising their rights, they were also curtailing the rights of African-Americans. Before the civil rights era, blacks in the south were treated as second-class citizens not only by the state and local governments, but also by private citizens. Of course the federal government was justified in curtailing the rights of bigoted business owners to choose the skin color of their patrons, so as to ensure the right of African-Americans to be treated as equal to whites.

Finally, while you are right in pointing out that you can't legislate people's hearts, it is also equally true that by outlawing certain racist practices, you are making it easier for the next generation to grow up in a country where such blatant acts of racism are less common, which does affect how they view race. If younger generations are on average more tolerant and less racist today than those who grew up before the civil rights struggle is, to a significant extent, precisely due to the successful passage and enforcement of the Civil Rights Act of 1964."
Posted by Shaw Kenawe at 12:17 PM

It amazes me this subject is even being discussed in the year 2010. Libertarians like the Pauls want to take us backwards, to a time in our country when citizens were not treated as equals, and to them that's fine. They justify their racist words by bringing the constitution into the conversation. For the right, it's always about the constitution and government intrusion. It's so lame...

"If you have ever been robbed by a black teen-aged male, you know how unbelievably fleet-footed they can be..."

"Given the inefficiencies of what D.C. laughingly calls the criminal justice system, I think we can safely assume that 95% of the black males in that city are semi-criminal or entirely criminal."

" We are constantly told that it is evil to be afraid of black men, but it is hardly irrational."

It's true that government can't legislate what is in the human heart, but that isn't the point. Government's role is to discourage harmful behavior. No one has ever claimed that the government can prohibit people from having murderous impulses or the desire to steal, either. That isn't its job. Its job is to stop people from acting on those impulses and actually committing murder or theft.

In the same way, if a lunch counter owner has racist beliefs, a law can't stop him from having those beliefs. But it can stop him from actually discriminating agaimst black people, which is where the concrete harm lies.