when it discovers a floating city of gonads: 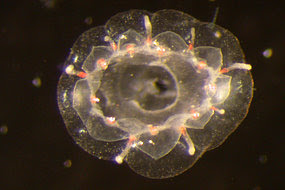 Tasmanian scientists have discovered a new species of jellyfish in Hobart's River Derwent and given it a sexy name.

The species is only a few millimetres wide and scientists say it looks like a flying saucer with a cluster of gonads, or sex organs, on top.

Scientists discovered the jellyfish while surveying the waters outside the CSIRO in Hobart.

The new species has been named Csiromedusa medeopolis, meaning "jellyfish from CSIRO" and "city of gonads".

"It's absolutely different from every other jellyfish that's ever been known," Dr Gershwin said.

"So we not only put it into its own new species and its own new genus, but it's actually a brand new family."

with sex organs worn like a crown
as it swims ‘round and ‘round.
A veritable gonad metropolis!

In other equally astounding news, National Geographic reports that a huge collaboration of scientist from around the globe has revealed a spectacular abundance of oceanic microbial life that has never been seen before.  These microbial "aliens" form mats on the sea floor off the west coast of  South America. "These mats rank among Earth’s largest masses of life, and cover a surface comparable in size to Greece."


Our planet depends on these creatures.

According to the NatGeo article:

This brings the disaster in the Gulf painfully into focus and illustrates how easily we humans, in our ignorance and greed, could truly destroy our precious environment--and ourselves.
Posted by Shaw Kenawe at 11:41 AM

Fascinating. There's still so much waiting to be discovered about life, especially in the sea. Jellyfish have always struck me as being one of the most alien-looking life forms on Earth.

Enough microbes to weigh as much as 240 billion elephants would be a lot of microbes.

There's supposed to be half a ton of termites for every person in the world.

Perhaps this revelation of the gonad sporting jellyfish will spur us guys to be more respectful of the environment. We all wince when a fellow guy gets it in the gonads.