Yes, that's correct.  An overwhelming majority of the American people are  behind Mr. Obama on his AJA.

And where are the Republicans?   They are solidly against the American people.


Here are the results of the poll, via Smartypants. 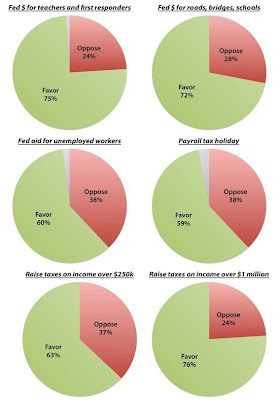 The GOP is solidly against helping Americans: 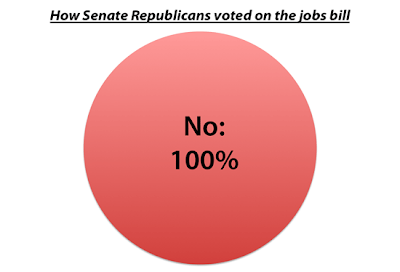 The GOP is no longer a political party, but a gang of economic vandals whose only goal is to keep Americans out of work and impoverished so that their party can defeat President Obama in 2012.

From a NYTimes editorial:

"There are 14 million people out of work, wages are falling, poverty is rising, and a second recession may be blowing in, but not a single Republican would even allow debate on a sound plan to cut middle-class taxes and increase public-works spending.


The bill the Republicans shot down is not a panacea, but independent economists say it would have a significant and swift effect on the current stagnation. Macroeconomic Advisers, whose forecasts are often used by the Federal Reserve, said it could raise economic growth by 1.25 percentage points and create 1.3 million jobs in 2012. Moody’s Analytics estimated new growth at 2 percentage points and 1.9 million jobs. Those economists say that Republican ideas for increasing growth would have no measurable effects in the next year."
It is excruciatingly clear why the GOP continues to obstruct anything this president offers to improve unemployment and get Americans back to work.

On another subject, during the debate in Nevada last night, the GOPers did themselves proud again.  If you remember the other debates, we witnessed:

1)     The GOP audience cheer lustily over Rick Perry's boast about how many people he's put to death, guilty or not, in Texas;

2)     We heard the GOP audience whoop it up over Ron Paul's suggestion that an uninsured young person should die because he could not afford insurance coverage;

4)     Continuing in their tradition of being heartless troglodytes, the GOP audience in Nevada loudly approved of Herman Cain's blaming unemployed Americans for not having jobs. [see video below]

Because the insensitive creeps actually believe Americans choose to be out of work and hurting.

Just imagine if the GOP achieves their goal of defeating Mr. Obama and they still control the House and take over the Senate, just imagine what their legislative program would be:

More tax cuts for the rich

Enhancement of the powers for special interests and their lobbyists

Repeal of the EPA

Gawker has this incredible story on a TPer actually vowing not to hire anyone and urging other GOP-TPers to do the same, so that Mr. Obama will be defeated.

THIS IS WHO THEY ARE:

Yes, too much press time has been spent criticizing the candidates. We half expect pandering to the base as part of the game. But what the base itself? They remind me of Gestapo in search of a Führer.

Shaw, it is interesting for me to watch how surprising flexible the GOP is regarding the support of Americans for various issues.

Years back, when President Bush doubled down on his Middle East war policy, {and yes, I know Lisa some Dems were in support] even when popular opinion was against him, he was called a great leader who did not respond to polls, choosing instead to do what he felt, in his gut was right.

Then when President Obama took a stand against popular support and pushed for a health care act, he was chided as acting against the wishes of the American people.

When we went on blogs and questioned illiterate bloggers on this, they almost unanimously voiced an opinion that America is a Democracy and that means majority rules.

Now we have a instance where America is taking the side of President Obama, and those same people are saying the media has deluded and fooled people, so they cannot possibly be expected to understand tough issues and think rationally.

The GOP partisans believe in majority rule, when it is in agreement with what they want. Then the electorate is smart and to be respected.

The GOP partisans think the American people are too stupid to understand the issues, if a majority of Americans disagree with GOP logic.

If a GOP President defies the will of the people, he is exerting great leadership.

If a Democratic President defies the will of the people, he is a commie, socialist, America hating, racist, apologizing idiot.

Does that about cover current GOP thought?

PS... regarding the GOP and jobs, can someone please explain to me why the "job creators" the GOP insists are just waiting for a better regulatory climate and less taxes before hiring, would do so, if no has enough money to buy anything?

If Bill the job creator has no customers, even with no regulations at all, why would he add an additional expense to his ledger?

Since individuals have no money to spend, and stimulate the economy, who does that leave?

Perhaps the rocket scientists can explain this one to me.

In 2006, when Americans voted to put the Dems in charge of Congress, I remember reading the conservative blogs that said the American people didn't know what they were doing.

IOW, only when the voters agree with their agenda do the conservatives think the American voter know what s/he knows what s/he's doing.

So polls, to them, are fungible.

In fairness Shaw I think both party's tend to think the public knows what it's doing only when voters agree with their agenda.

Dave - Good observation. What drives business to hire people is growth in sales, requiring more production of their goods or services. In short increased demand.

It really is almost that simple. What isn't simple is how to create sustainable demand that will result in long term employment.

The once vaulted American capitalist system (which is really a mixed economic system and has been for a long time) is a sick puppy today. Some of the illness is self made.

Brookstone (the TP*-er who wants hiring to stop) is just taking a cue from the House Republicans, who have repeatedly held the unemployed and other non-wealthy Americans hostage in their efforts to thwart whatever Obama happens to want to do at any given time.

That, and engaging in "going Galt" fantasies.

The once vaulted American capitalist system.....is a sick puppy today. Some of the illness is self made.

If we want to diagnose that, a tax system that fails to discourage (and in fact sometimes encourages) shipping jobs overseas would be a good place to start.

*Every time I see "TP" in this context, the first thing that comes to mind is "toilet paper".

This is the type of question the GOP and the business apologists are unable to answer.

Because there is no answer that keeps that job here. There is no economic reason to keep that job on US soil.

RN, you're seem to be a big supporter of "true" capitalism. I Let's assume that is capitalism where there is no interference from the government, a conservative value.

If we have that, how does that get Americans back to work? If the Board of Directors of a company do not make the best decisions financially, in this case, to send those jobs overseas, they get sued for financial mismanagement.

How is this best for America RN, or any other conservative that passes through here.

Because there is no answer that keeps that job here. There is no economic reason to keep that job on US soil.

Exactly. It's time the government governed in the interests of the American people rather than in deference to economic abstractions.

Shaw, I thought about the exact point you posted above re the war in Iraq and the Libyan situation.

I both countries, we got rid of a dictator who was horrible with his own people and had large reserves of oil.

Now, we can argue about whether Libya is ready for the next phase of government, but let's be honest, I don't remember the Bush Admin approach working out to well on that front either.

Republican pols and those in the hard-right base are selfish, cynical bastards who will say and do anything to get what they want, which is to win. They don't care who gets hurt, either.

If enough Americans don't get this by now, even before Democrats begin campaigning in earnest, and hand Republicans a crushing defeat in 2012, I don't hold out much hope for the country.

We have a democracy. If a majority of voters want, or again fall for the lies of, cynical, selfish, ruthless leadership that doesn't give a happy damn what happens to them, we'll be beyond the realm of politics. The only way to explain that is as some kind of mental/emotional disorder.

"RN, you're seem to be a big supporter of "true" capitalism. I Let's assume that is capitalism where there is no interference from the government, a conservative value.

If we have that, how does that get Americans back to work? If the Board of Directors of a company do not make the best decisions financially, in this case, to send those jobs overseas, they get sued for financial mismanagement.

How is this best for America RN, or any other conservative that passes through here."

1) I am a radical for capitalism
2) That means, no subsidizing, no crony capitalism, corporatism, no too big to fail

3) Establishing sensible trade policies. An here conservatives will have my head... When American producers elect to go offshore and take jobs overseas when their goods reenter the US the company pays tariffs to do so so the achieve 0 net gain.

4) That and place tariffs on imports so the cost to the consumer is the same a as if they bought American.

It may not be that simple but it's time we change hears. I recommend "Three Billion New Capitalists" for all to read.

If the American worker has to compete with workers in China, then America will come to the point where it, at best, will be producing goods for foreign markets, with all the profits being consumed by the rich, leaving America in a sorry squalid state. And what of the rich, who think they will benefit from such an arrangement? They will find themselves sitting on mountains of cash. Sitting there, doing nothing, wondering why all this cash cannot even buy them the time of day.

The GOP is nothing more than club of Fucking Idiots, who have no idea what they are doing. A bunch of Clown Politicians who they actually know something. They don't know anything!