The New Feudalism (According to the Latest CBO Report)

By Octopus
The Director’s Blog of the Congressional Budget Office released this report earlier today. It confirms everything we know about income inequality, and everything the Occupy Wall Street demonstrators have been saying from the start:

If the language of the CBO summary is understated, the accompanying graph screams louder than words: 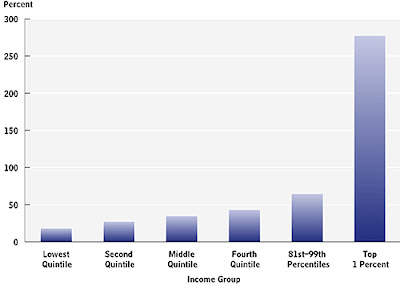 Devils in the detail: Between 1979 and 2007, the top 1 percent of the population benefited from a more than twofold increase in household income, whereas the middle quintiles – representing 60 percent of the national population – saw their income share decline by 3 percent. Income for the lowest quintile fell by more than 7 percent. Thus, the rich got richer while the living standards of most Americans dropped significantly.

Bottom line: The so-called American Dream has vanished with no upward mobility for the middle class - especially for the younger generation with few career prospects to pay back their college loans.

Of course, the GOP always sees things differently. Under their PR lens, they have demonized everyone on unemployment as indolent loafers and suspected drug users. They have blamed public sector deficits on overpaid and over privileged public sector workers. They no longer consider Social Security and Medicare as ‘earned benefits’ but as burdensome ‘entitlements.’ Big Brother, they insist, has no business looking after little brother. And all Occupy Wall Street protesters shall be demonized as unwashed, unemployed, drug-addled, sex-crazed socialist hippies hell bent on income redistribution. Any heretic who challenges the gospel of ‘privatize profits and socialize risks' shall be pilloried and scorned. Thus spoke House Speaker John Boehner and House Majority Leader Eric Cantor. Thus spoke Senate Minority Leader Mitch McConnell. And thus spoke their media prophet, descending and condescending from Mount Rush.

Under the Republican PR lens, a humble breadcrumb shall turn into a mighty bread loaf. Modest morsels shall once again grace every table under the aegis of supply-side orthodoxy - more tax cuts for the rich and less benefits for the middle class. America's hallowed corporations will move your job to a third world country unless you agree to turn America into a third world country. Austerity and ritual sacrifice shall renew the land, and mandatory voter photo IDs will herald in a new Golden Age of Perpetual Feudalism.

If readers think I am overstating the case, here again is former Republican staffer Mike Lofgren in Goodbye to All That: Reflections of a GOP Operative Who Left the Cult:


The GOP cares solely and exclusively about its rich contributors. The party has built a whole catechism on the protection and further enrichment of America's plutocracy. Their caterwauling about deficit and debt is so much eyewash to con the public.

Republicans have attempted to camouflage their amorous solicitude for billionaires with a fog of misleading rhetoric ... Another chestnut is that millionaires and billionaires are "job creators." US corporations have just had their most profitable quarters in history; Apple, for one, is sitting on $76 billion in cash, more than the GDP of most countries. So, where are the jobs?

Another smokescreen is the "small business" meme, since standing up for Mom's and Pop's corner store is politically more attractive than to be seen shilling for a megacorporation. Raising taxes on the wealthy will kill small business' ability to hire; that is the GOP dirge every time Bernie Sanders or some Democrat offers an amendment to increase taxes on incomes above $1 million.

Likewise, Republicans have assiduously spread the myth that Americans are conspicuously overtaxed. But compared to other OECD countries, the effective rates of US taxation are among the lowest. In particular, they point to the top corporate income rate of 35 percent as being confiscatory Bolshevism. But again, the effective rate is much lower. Did GE pay 35 percent on 2010 profits of $14 billion? No, it paid zero.

When pressed, Republicans make up misleading statistics to "prove" that the America's fiscal burden is being borne by the rich and the rest of us are just freeloaders who don't appreciate that fact.

All of these half truths and outright lies have seeped into popular culture via the corporate-owned business press … More important politically, Republicans' myths about taxation have been internalized by millions of economically downscale "values voters," who may have been attracted to the GOP for other reasons ... but who now accept this misinformation as dogma.

My closing question for today: When will middle-class Republicans finally see the light and leave the cult before it’s too late.
Posted by (O)CT(O)PUS at 3:07 AM

This piece by Nicholas Kristof in today's New York Times on crony capitalism is also an important part of the issue:

"Capitalism is so successful an economic system partly because of an internal discipline that allows for loss and even bankruptcy. It’s the possibility of failure that creates the opportunity for triumph. Yet many of America’s major banks are too big to fail, so they can privatize profits while socializing risk.

The upshot is that financial institutions boost leverage in search of supersize profits and bonuses. Banks pretend that risk is eliminated because it’s securitized. Rating agencies accept money to issue an imprimatur that turns out to be meaningless. The system teeters, and then the taxpayer rushes in to bail bankers out. Where’s the accountability?

It’s not just rabble-rousers at Occupy Wall Street who are seeking to put America’s capitalists on a more capitalist footing.

“Structural change is necessary,” Paul Volcker, the former chairman of the Federal Reserve, said in an important speech last month that discussed many of these themes. He called for more curbs on big banks, possibly including trimming their size, and he warned that otherwise we’re on a path of “increasingly frequent, complex and dangerous financial breakdowns.”

Anyone who can look at that graph and insist there is no problem -- is part of the problem.

Such an extreme concentration of wealth and power in so few hands ultimately becomes dangerous for everybody. Just ask Louis XVI.