A Short But Pithy Illustration of the GOP's Failure to Deliver on Its Promise of JOBS! JOBS! JOBS!

UPDATE BELOW
Because working with President Obama to put Americans back to work would be positive for the president.  Clearly, the GOP is more interested in defeating Mr. Obama than in helping the American people, and this chart proves it: 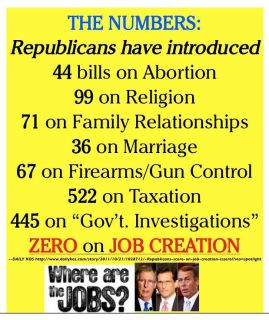 Good friend and fellow blogger, Leslie Parsley of Parsley's Pics, alerted me to this PolitiFact post on the above post, which I found on facebook and posted here.
I use PolitiFact as a reference on determining if something is true or false.  According to PolitiFact, the above poster is "Pants On Fire" false, and I'm posting this to alert my readers to that.  I usually fact check before I publish a blog posts.  I didn't do that in this case.  Here is what PolitiFact wrote about the above graphic:
"Job creation" means different things to different parties.

Most conservatives today are dead-set against traditional forms of government-based economic stimulus known as Keynesian economics, primarily spending initiatives. So if "job creation" is defined to primarily include Keynesian initiatives, then Republicans aren’t going to be sponsoring any "job creation" bills. Instead, Republicans argue that tax cuts and budget cutting will help the economy prosper.


While congressional Republicans have certainly introduced dozens of bills on social issues and other topics, the claim that the GOP has focused on issues other than job creation just isn't supported. The numbers cited in the post include Democratic bills, and the definition of what constitutes a "job creation" bill is open to significant debate.


But the post’s most important flaw is the contention that Republicans have offered "zero" bills on job creation. This number stems from a methodology that also excludes Obama’s American Jobs Act from the category of "job creation" bills. If you look at alternative job-related subject headings, the number of bills offered by lawmakers from both parties actually exceeds most of the social-issues listed in the blog post. We rate this claim Pants on Fire."


According to PolitiFact, Congressional Republicans HAVE sponsored "job creation" bills, as defined by the GOP.

As far as I can determine, NO JOB CREATION BILLS HAVE BECOME LAW that have put thousands of people back to work since the GOP took over the House one year ago.
Posted by Shaw Kenawe at 1:09 PM

That illustration is both on point and sad. Just like a graphic I posted on FB says, "Republicans 2012: Keeping Millions Out of Work to Put One Man Out of a Job".

Malcolm,
That is a great graphic. I tracked it down and posted it on my site. Thanks!!!

Jerry and Malcolm, I have that poster on my right sidebar.

And speaking of cowards [which we weren't], the daily kos has this interesting pol on its site this morning.

Reading it and understanding that members of the GOP [and two blue dog Dems] are still out there making sure people suffer more is not a happy way to start the week. But here is the poll:

"Of these, which do you believe is the biggest act of lily-livered cowardice?

"Which do you believe is the biggest act of lily-livered cowardice?:

Running from job creation by continually voting against the American Jobs Act (Republicans, plus Ben Nelson and Jon Tester)

That should read "...interesting POLL..." {not enouch coffee this am}.

Republicans are interested in filling a select few jobs: president, vice president and various Senate and House seats. Beyond that, they're interested in making and keeping as many nonwealthy Americans as miserable, fearful and resentful as possible. That worked for Republicans last year, so they will keep doing it unless and until it backfires on them.

Auntie Shaw,
Do I really, really hafta be bipartisan? It's not working out (trust me). I'd rather be bipolar.

SWA, I don't understand how so many working and poor people in the GOP can continue to support its elitist policies. Blind allegiance comes to mind.

I think it's more important to be polite than to be bipartisan.

So when you have to respond to a looney person, always respond in a nice way.

If you do this, Auntie Shaw will bake you some yummy pumpkin cupcakes with cream cheese frosting.

I don't understand how so many working and poor people in the GOP can continue to support its elitist policies.

It's fear of gays / abortion / secularism / blacks / the unknown. All that stuff the Republicans have been pushing instead of jobs does have a purpose. Because the US is so much more religious than most developed countries, protection of ancient taboos against challenge does hold appeal for significant numbers of narrow-minded people.

There are also people who weirdly feel a genuine sense of alarm at any sort of "injustice" toward the wealthiest, no matter how badly everyone else is struggling. I know this from talking with people, though I don't really understand it. Desire to identify with the powerful? Stockholm syndrome? At any rate, pointing out things like Warren Buffett being taxed at a lower rate than his secretary does sometimes make something of a dent. We need to keep reiterating such points.

In fairness, they have name about a dozen federal buildings.

Wow, I just saw this at PolitiFacts about this claim. Don't agree with their assessment at all.