You go, girl!  The morons in wingnuttia can't stand the fact that a highly educated First Lady is doing so well, and that she's light years smarter than they could ever hope to be.  Therefore, they're apoplectic about anything this brainy, beautiful woman does.


Psst!  Mrs. Obama!  They couldn't spell your name correctly if their stupid, small, cramped, and inconsequential lives depended on it.

Remember:  They're ranting on blogs, and you live in the White House.  LOL! 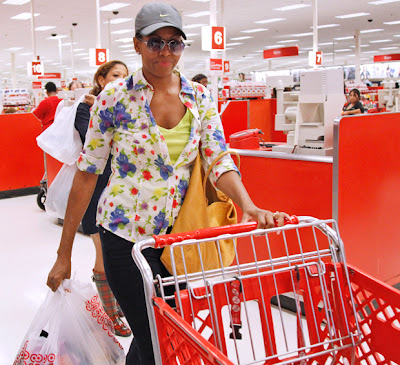 What I found so funny was he just couldn't figure out why Mrs. Obama was carrying her bags and pushing an empty cart! Duh Mr. MORON, you see, after you pay for your purchases, they bag the goodies up, and then you carry them whilst pushing the cart back to the cart line up in the front of the store!! See Asshole, very simple, but you probably never been to a Target since you live in NYC and shop where the snobs shop...

"Remember: They're ranting on blogs, and you live in the White House."

Quite interesting I think...

How hard up can the political right get, when they have to pick on a woman for going shopping at Target? Inredible.

As far as Mr. Moron is concerned, he probably never wheeled a shopping cart back where it belongs in his life. Probably leaves them taking up a parking space or rolling into the side of someone's new car.

The rabid righiest need to feed on their hate the way vampires need to suck out and feed on blood from healthy people.

Mrs. Obama is a favorit blood target for them because she's successful, bright, and beautiful--three things most of the ranters are not.

They're out of their minds with envy and jealousy--and one other thing that they deny all the time, but which I believe is what informs their hatred and stupidity.

I have been following the 'Occupy Wall Street' demonstrations assiduously. According to news coverage, critics claim that the group has no platform, no list of demands or talking points. Yet, the demonstrations are spreading to other cities - Boston, LA, Chicago, Washington DC - and the Metropolitan transport workers union has joined the cause.

For lack of a better term, this is the Thermidorian Reaction in response to the excesses of the Tea Thugs and Republican hostage takers who would destroy the economy and sell out the middle class just to score political victory. Yes, there is a real and palpable rage building in this country.

The GOP and their billionaire benefactors should be forewarned: These demonstrations are not going away, and the pent up rage is reaching a boiling point.

If the First Lady had sent one of her staff members to Target, the right-wing nuts would have accused her of being an elitist. This is just another example of why you can't have a rational conversation with these people. Not all conservatives, just the ones who criticize President Obama and the First Lady no matter what they do.

I took a look at that blog post where our friend was obsessing over why Mrs. Obama was carrying the bags instead of putting them in the cart. Cue up the shower scene music from "Psycho"!