That was the chant heard most often in today's "Occupy Boston" demonstration.

I met up with the marchers in Boston's Dewey Square and joined them with my own sign which I wrote with my 4 French friends in mind, [and who will be here in Boston visiting me at the end of the month.]  Afterall, it is the French who proclaimed Liberté, égalité, fraternité during their revolution against the filthy rich oligarchy.

The demonstators were a mixed group of college students, middle-aged and older Americans from all sorts of backgrounds:  African American, Latino, Muslim, Indian, Asian, and the rest of us.  The weather cooperated by being an unseasonably warm and glorious almost mid-October Columbus Day, reaching the low 80s.  People were  handing out free water for the marchers whose voices were getting hoarser by the minute.  Drum beaters, bongo players, and a band were there to add to the festive, but serious nature of the demonstration.  I'm the one with the sign in French with the translation.

My voice is hoarse, and my feet are sore, but I'm glad I participated. 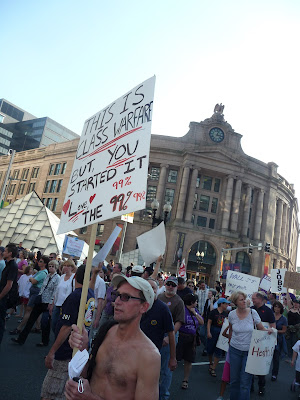 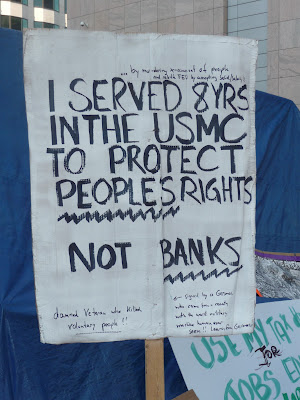 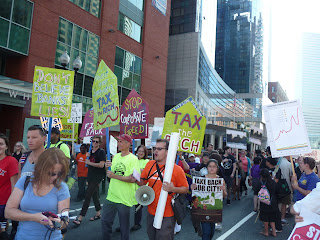 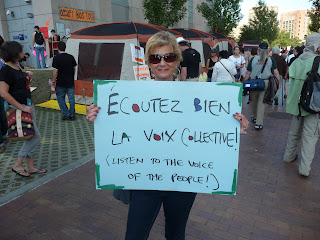 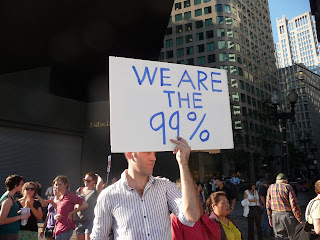 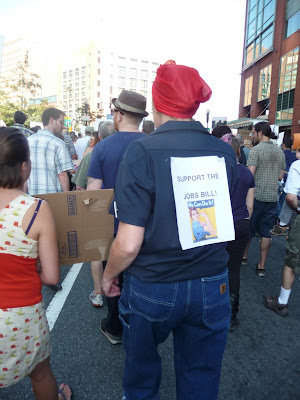 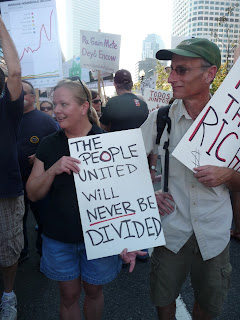 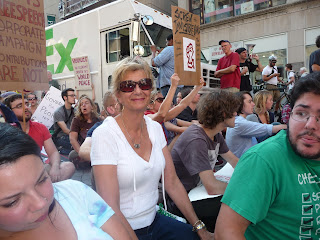 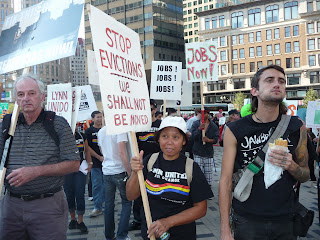 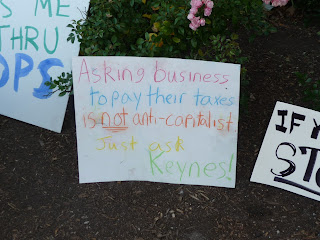 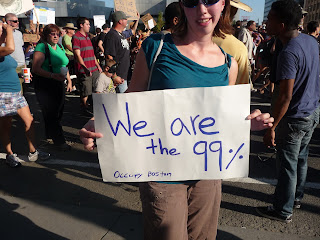 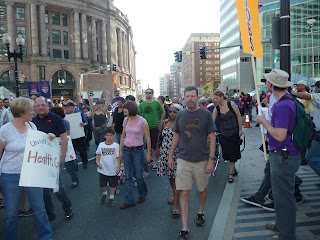 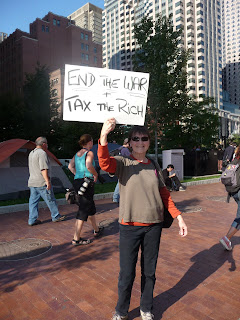 I was hoping you'd post about this. Good jobby - and good for you for getting out there.

Good for you!!! All the best people are showing up.

We're headed for Occupy DC in about a week. I was worried that they'd lose their permit at Freedom Plaza, but they were given four more months. Now, they are headed to the Senate, Hart Building. Chewing my nails, watching how this plays out, hoping they can hold their discipline and be safe. The message is too important!

woohoo shaw! wish i could have been there...all power to the people...

We need to brand them as the anti-jobs, pro-billionaire party.

I know it's more complicated than that, but Americans need to have short simple slogans blasted at them before they pay attention to what is going on.

I suspect the best answers are to be found somewhere in-between the polar opposite ideologies.

It is my hope that OWS remains focused on crony capitalism, corporatism, etc. and does not become politicized and drawn into rigid ideologies as the Tea Party has.

As far as the republican party in general is concerned, it's hard to predict really, but my guess is unless their tent enlarges rather than continuing to get smaller the party will actually become rather marginal in national affairs.

IMO this is because they actually have no real ethical philosophy anymore by which they attempt to govern.

"This is what Democracy looks like" ..... indeed.... it was a common expressed sentiment here in Wisconsin.... protesting against Scott Walker and his repressive budget....voter suppression laws...gerrymandering.... sooner or later we will restore Democratic processes... keep it up!!!!

Here is a worthy tidbit from my daily Internet scans:

Of all the Occupy Wall Street refrains, one of the most memorable is, "I refuse to believe that corporations are people until Texas executes one [my bold]." But, clever as it is, the quip looks to the wrong end of the life cycle: The only thing more corrupt than the legal concept of corporate personhood is the way a Gilded Age judge birthed it.

Earlier today, I added the following to a post on voter suppression:

A political party is merely the public face of its backers in the pursuit of economic self-interest. In this article, The Real Agenda Behind Voter Suppression, Donald Cohen offers this perspective:

"In 1974 and 1975, the Conference Board, a mainstream business organization, held a set of strategic brainstorming meetings with groups of top business executives to understand these threats to free enterprise and begin to chart a course to fight back. They openly expressed their worries whether democracy, in the long run, was even compatible with capitalism. “One man, one vote has undermined the power of business in all capitalist countries since WWII. “ said one participant. Said another, “We need to question the system itself: one man, one vote [my bold]."

… which leads me to an academic question: If you can only have one, democracy or free enterprise but not both, which would you prefer? In my view, the Conference Board debate is a false dichotomy. Democracy and free enterprise are not necessarily mutually exclusive because eventually you will end up with neither. In a predatory world where the rules are written only by the most powerful, eventually the big fish will swallow the little fish, and all you will have left are lords and serfs.

This, I believe, is where liberals and conservatives should put aside their petty squabbling and come together because the stakes are simply too high.

Be careful there, RN - You're beginning to exhibit extraordinary perception! Even more interesting, I find myself in agreement with you. Holy cow, what's the world coming to? ;)

LP - I'm humbled by your words.

Article is Protest and Power, from The New Republic.