and call  President Obama's plan to boost taxes on the wealthiest citizens "class warefare."  But listen to what President Ronald Reagan said about this very same subject.

The biggest hero of the Republican Party, Ronald Reagan, proposed EXACTLY what President Obama is proposing.

So the question is why do GOP-TPers call what President Obama is proposing "class warfare," and not condemn President Reagan as well on the exact same issue?

Could it be that the GOP-TPers are more intererested in preventing President Obama from having a second term than in helping the American people?

Is that why the GOP-TPers claimed JOBS!  JOBS!  JOBS! were the most important issue during last fall's campaign, and then when they got control of the House, they went after Planned Parenthood and NPR?

The GOP-TPers never fail to bring Ronald Reagan's name into political discourse as an example of when America was great--"Morning in America."

But it turns out that if Mr. Reagan were alive today, he would be supporting President Obama's tax proposal and would turn away from the Crowd of Crazies that the present-day GOP-TPers have become. 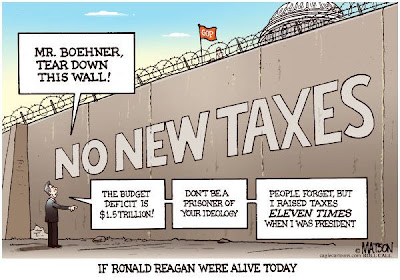 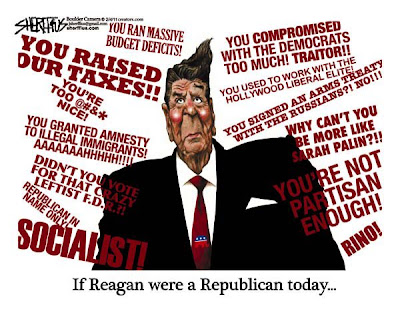 Shhhh. don't tell them about this...it might make them take their heads out of their butts...

i think if reagan was alive today he would have evolved into the same lunacy as the rest of the right wing crowd.

the world is a different place.

It shows how Republican Obama is, but keep worshiping him like a God you diluted Obamamaniac.

Hey anon! Do the TPers hire you to write their signs?

How many parts per cc?

And BTW, it shows how LIBERAL Mr. Reagan was, but we wouldn't expect someone who doesn't know the difference between diluted and deluded to get that.

Shaw, is that another "moran" I see?

ha! selective memory.... Some in the GOP still don't get it....corporations do not create jobs.... people do

I would suggest that those who revere Reagan should read the book "Tear Down This Myth". However, they will likely dismiss facts as liberal propaganda.

By the way, nice takedown of the second "Anon" who commented.

Anon probably carries a sign that says, "Speek English Only."

Knowing in detail what Reagan did requires dealing in facts. Avoiding hypocrisy requires being honest. That leaves today's Republicans out, tea partyers in included.

Malcolm, thanks for the book tip.

Leslie, I think I know who left that comment.