The New Yorker magazine's cover perfectly illustrates who they are: 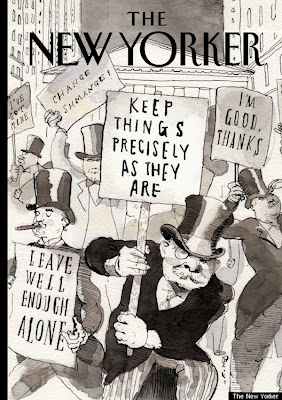 The curious thing is that if you check out a number of rightwing blogs, you'll read how they are defending the 21st century robber barons, the Wall Street financial rapists, the banksters, and the corporatists who happily ship their American jobs overseas, thereby fattening their bottom lines and guaranteeing the 99 percenters more hardship and the inability to flourish in this country.

It's a mystery to me why so many conservatives continue to serve their wealthy masters while, at the same time, experience their failing economic health, and why they continue to vote against their own self-interests.

The OWS movement is marching and demonstrating for them, for their children and grandchildren, but they don't get it. So long as they listen to idiots like Glenn Beck, Eric Cantor, and the people running for the GOP presidential nomination--y'know, the conservatives standing up for and defending the one percenters--these misguided Americans never will.

Meanwhile, to understand how the top one percenters are growing wealthier and the middle and lower classes are shrinking and losing financially, look at the charts from this Mother Jones article.

The charts are very clear, but amazingly the wingnuts don't think it's any of our business to intrude on the rich and their wealth. They think it's fine to give the rich tax breaks while the poor and MC pay for those tax breaks...do they think they are a freebie from the government?? I don't get the wingnuts and their thinking...

My only observation is even taxing the wealthiest one percent at 90% would not would not resolve the immense problems we face today.

Yes, the problems are certainly deeper than just raising the tax rate on the wealthy. But it might not be a bad idea for the republicans to acquiesce and allow taxes to return to 39.6% on the wealthy. It might at least delay a split in the national seams.

As one who supports a capitalist economy and a democratic republic I must say at this point it is time to unify on common cause. Which to me is securing the greatest economic independence, the greatest personal liberty, with the minimum government regulation and oversight possible.

Having said that I am beginning to recognize the political and economic views of some conservatives have wandered so far to the right that they are bordering on, if not already at the reactionary.

We can continue to have differences, and to discuss them. But first lets fix the obvious problems we face as a democratic republic. Or otherwise we make awake some morning with a lot of America burning.

It certainly is not what I want for my children or grandchildren.

Rational Nation USA said...
This comment has been removed by a blog administrator.
October 18, 2011 at 6:03 PM

"We can continue to have differences, and to discuss them. But first lets fix the obvious problems we face as a democratic republic. Or otherwise we make awake some morning with a lot of America burning."

I share the same concerns, which is why there must be some moderation in our public debate that has been so polarizing in the past. I should point out that polarization is exactly what the most malevolent factions want. When coalitions of people with common economic interests break apart, those malevolent factions win by divide and conquer, and then everyone else loses.

We lose the fine art of compromise and consensus when extremist elements resort to hostage taking, and this is what brings us closer to "burn, baby, burn."

//not be a bad idea for the republicans to acquiesce and allow taxes to return to 39.6%//

of course it is not a bad idea. The tax breaks were never meant to be permanent... they came nowhere close to what they were meant to accomplish.... it is a start.