Found outside of Davos: 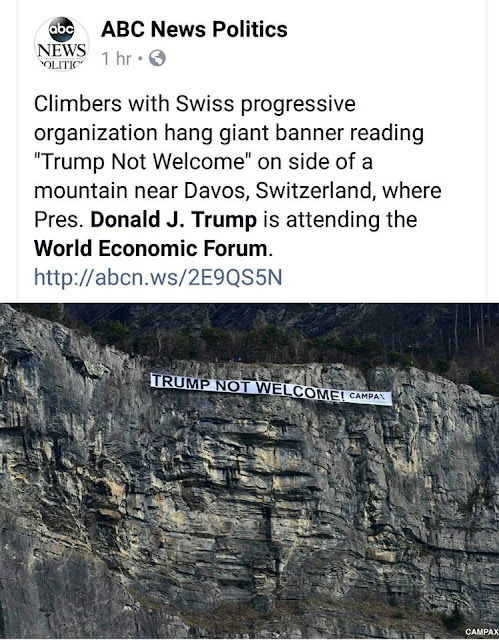 Making America respected is not part of making it great in Trump’s book. He would rather make America feared. It is what bullies do.

Yeah Jerry, Trump reminds me of the Mafia bosses and families of old. They demanded respect and loyalty and through fear were able to maintain a false sense of both. Although I'm sure they really knew the truth.

It is likely Trump does too.

..Just because I want them to keep him!

I should add Jerry that the Mafia Bosses had more honor than Trump does.

The far righties need to be reminded that this sort of insult to America's prestige and president never happened to President Obama. He was admired and respected in Europe, unlike the philandering clown who temporarily represents America now.

Jerry: Making America respected is not part of making it great in Trump’s book. He would rather make America feared.

This is actually an important point for understanding Trumpanzee rhetoric, including what sometimes gets posted here. They often claim that Trump has made America respected, whereas Obama did not. The reason they say this is that to them the word "respect" means "fear", and they can't imagine it working any other way. To them, the fact that people in other countries liked or admired Obama and his policies was meaningless, worthless. That's not "respect". True "respect" would have been fearing him and what he might do.

The fact that people are frightened of Trump means they "respect" him, and Trump's supporters get a little frisson of feeling powerful out of it, the way a bully's toadying friend feels a little bit of swagger as long as others are afraid to cross him because he's under the bully's dubious protection.

As the Davos banner, the Women's March, and many other things show, a lot of people are not afraid of Trump. To that, the Trumpanzee response is infuriated name-calling, because to them it is simply lack of respect.