by refusing to criticize the disgrace in the Oval Office. The rest of the U.S. and the world see their disgusting hypocrisy. 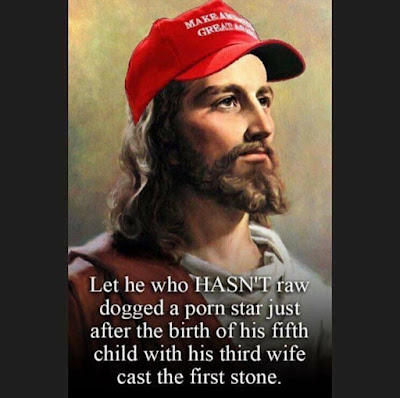 There really should be no debate about whether sociopath and sexual predator Donald "Rump" Trump is a manifestation of the long-developing rot within the Rethuglican / New Confederate / Pedophile Party, or a departure from their norm. In their "up is down" world view, more Rethugs are satisfied with the moral and ethical climate now than under President Obama, per this recent Gallup poll ": 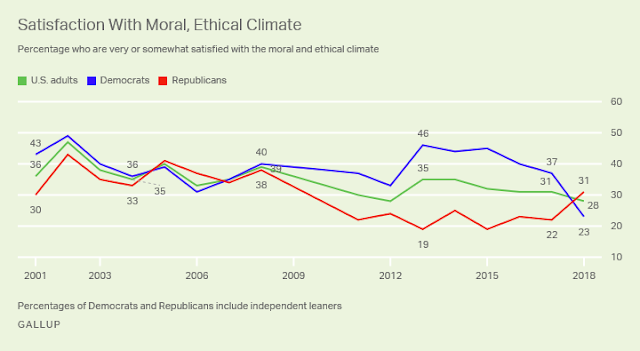 Let's this sink in:

The people who call themselves "Evangelical Christians" support and admire Trump who is a serial adulterer who paid $130,000 to a porn star to keep her mouth shut about his whoring with her when his third wife had just had his son. Trump, ever the selfish pig, never stopped to think about how his son, Barron, will feel when he (if he hasn't already) finds out about his father's infidelity to his mother when their marriage was still new, and she had just given birth to him.  Never forget the Moral Rot that is the current Republican Party and the morally rotten so-called "Christians" who continue to support the indefensible anti-family values pig in America's White House.
Posted by Shaw Kenawe at 4:00 PM

From Hunter at the Daily Kos: "We document [trump's] Twitter feed because it is ongoing evidence that this man is completely unfit for office, and a national embarrassment, and approximately one poorly placed television commercial away from killing us all. He has spent a year in office and is still hopelessly confused by the notion that he is not, in fact, dictator of us all; he remains infuriated that the laws of the United States of America do not bend and break according to his personal whim. A year in office, and he does not grasp why the president is not allowed to obstruct justice. He was under the impression that he could instruct his government to stop investigating his campaign allies, like Flynn; he remains under the same impression even today. The man is, to use the preferred scientific term for these things, an effing idiot."

C'mon, Donny was a naive, young 60 year old sowing some wild oats. Who among us has not wanted to be Forbes spanked by the star of "Good Will Humping"? The Christian thing to do is forgive. It's not like he committed the unforgivable sin of owning a private server.

Trump's base are the same people who demonized a bi-racial president who was a faithful. loving husband and father; a president who comported himself with dignity and grace and who never embarrassed America while visiting abroad.

Also, President Obama was not reviled, as trump is, by our closest ally, Great Britain.

The so-called Evangelical Christians have shown US and the world what really matters to them -- not their "moral values," but political power. This must be thrown back in their hypocritical faces forever!