What on earth was this inexperienced, overprivileged, undereducated grifter doing, on the taxpayers' dime, pretending she's some sort of Barbie Doll diplomat?

Trump forces his daughter on the world, and the world laughs at him and her.

Other than hiring people to design earrings and handbags for her label, what has she done? And how does that qualify her to be among the world's leading diplomats and leaders?

Ivanka, like her father, is impressed with herself and her pseudo skills and knowledge as a international player.


"Beyond ridiculous is the only way I can describe this situation.

The Trump progeny have no credentials, no experience, and absolutely no reason to be on their daddy's current business trip. Ivanka can certainly stand around and look elegant, just as her brother, Donald Jr., can be expected to say/tweet comments indicating his astounding ignorance, but, other than their questionable "entertainment value," I see no reason whatsoever (as a taxpayer!) to have to foot the bill for these freeloaders as they travel the world. Pretend diplomats? Hardly. Overindulged children, definitely."

Nepotism at its worst, and problem with nepotism is that it is not merit based. Relatives displace better-qualified people. She is not qualified for this. It is not ok for the US to bring along clearly unqualified people to international gatherings only because they are blood relations. 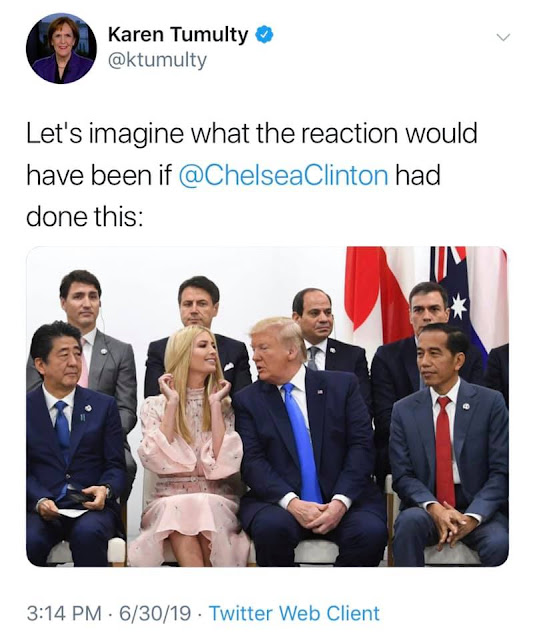 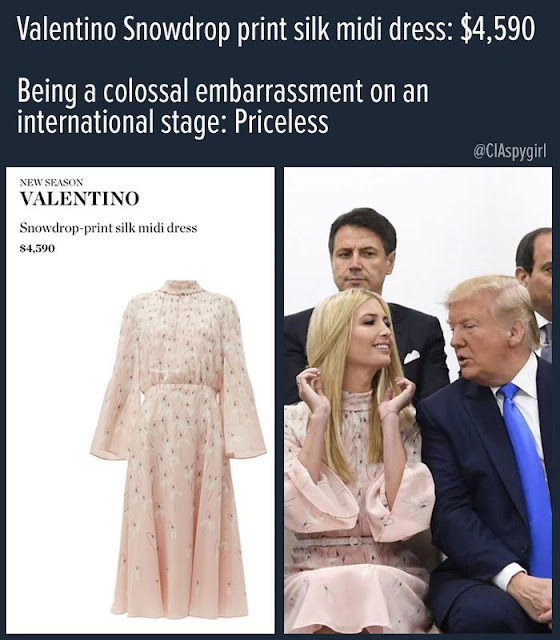 Yes, BB-Idaho, we still have a free press thanks to our Constitution, but Trump trashes the 1st Amendment every chance he gets. Like a tinpot dictator, he calls the free press "the enemy of the people" because it doesn't slobber over his every word and deed.

As for his daughter, she was vastly outclassed by every dignitary and leader at the G20, and she clearly is being promoted by her narcissistic father as a reflection on himself. It looks to me as though he's hoping she'll be our first female president. Being an empty-headed, all hat and no cattle kind of president worked for him, why not his Barbie Doll wannabe diplomat daughter?

The 30 percenters are beguiled by appearances with no substance.

Most large corporations ban nepotism but it seems the federal government is fine with it. Remember when Chelsea got paid millions to run a charity whose sole existence was to fund the Clintons lavish lifestyle. I have no problem with that because they left the WH flat broke and needed some cash and we would hate for a past president to rely on food stamps.

But while it is illegal, the law needs a DOJ or a Congress willing to prosecute the offense and we all know no GOP Congress is going to try that with Trump.

Now, what Chelsea did for the Clinton Foundation has nothing to do with government nepotism. You seem smarter than to conflate a private job with civil service.

Every corrupt kleptocracy needs its own entrenched and inextricable family dynasty.

These people will never go voluntarily. They will go the way of all dictatorships, which is never pretty. Beware, America.

In response to Lee Arnold:

You are absolutely correct, except today's generation(s) are most decidedly not made of the same timber or intellect as our founders. Especially the republicans and trumper conservatives.

2020 ain't gonna be pretty regardless.