The Republicans’ president is a functioning illiterate

"The Continental Army suffered a bitter winter of Valley Forge, found glory across the waters of the Delaware and seized victory from Cornwallis of Yorktown. Our Army manned the air, it rammed the ramparts, it took over the airports, it did everything it had to do, and at Fort McHenry, under the rocket's red glare it had nothing but victory. And when dawn came, their star-spangled banner waved defiant." — Donald J. Trump (July 4, 2019)


Trump knows nothing about American history nor anyone‘s history. There is no one with any kind of education who would have added the word “airports” while speaking about events of the 1800s. That Trump veered off of his written speech and talked about the American revolutionaries seizing airports from the British is further proof that Trump is a functioning illiterate.

No amount of grandiose parades and speeches can erase the fact that Trump is unfit to be the President of the United States. My 10-year-old grandson is smarter than he is .

Sad trombone for the Trump supporters who trekked to the Mall in the rain, only to realize the actual event is for rich donors. https://twitter.com/ositanwanevu/status/1146821905888022529 … 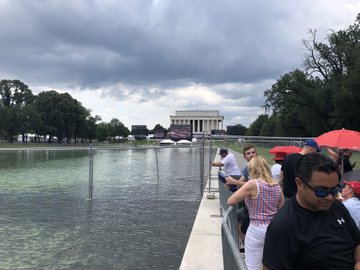 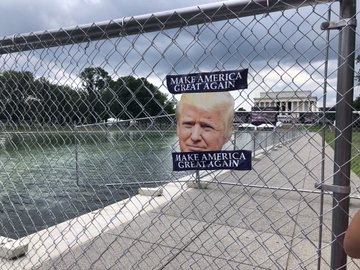 73 people are talking about this

Replying to @willsommer
Nothing symbolizes and celebrates freedom and democracy like chain-link fences separating the ruled from the rulers. Good optics, better sentiment.

76 people are talking about this

He also implied the flag was involved in the Revolution. It wasn't conceived until 1777. Trump is a roaring idiot. Just like his supporters.

All of Trump's (alleged) wealth doesn't change the fact that he is essentially as dumb as bag of rocks.

I wonder how many times skudrunner will remind us that the Republicans' president said the American Revolutionaries seized the airports from the British.

Trump uttered those words on his own. He went off-script and exposed himself to America and the world on how incomprehensibly stupid the American president is. He knows nothing about America or her history. Someone wrote his speech, but I'm sure whomever it was, he or she DID NOT talk about airports in the late 1800s during the American Revolution. Those are President Dotard's own words.

HIs ignorance was on full display, as stupendous at the smokey fireworks and downpours all over his cages for vips.

I did not realize we seized British airports. I must have missed that part of history while in school so I am glad you brought my up to date. his predecessor showed that relying on a teleprompter was not a great idea but he didn't listen.

I will assume you will not support him in his reelection bid. I probably won't either unless he dumps Pence and puts Nikki in his place.

Funny how Biden and Madam Pelosi are not the centrists in the democratic party.

That..from the inventor of Fake News?

BB-Idaho Trump, as usual, is blaming the teleprompter for his stupid utterances. Because without a teleprompter he wouldn't know that no airports existed during the Revolutionary War?

Yes. He's either demented or ignorant. IMO, both.

skudrunner, what would a comment be from you without some negative reference to President Obama? It's your default position, and it occurs to me that somewhere inside you, you actually DO know that President Obama was a more decent, educated, dignified, and honorable man than Trump has ever been or will ever be, and that upsets you to the degree that you are compelled to denigrate Mr. Obama every chance you get to keep that thought from taking hold and letting you see the truth.

Your trashing Mr. Obama will never hurt him. Ever.

An ignorant man is ignorant of his own ignorance. Trump is living proof of that truth.

BB, I agree with all you said about your praise of Obama and I have said it before that he is a swell guy. He was just a lousy president for those of us who were middle class business owners because and taxpayers. His only concern was the special interest groups and the billionaires. The rest of us were just a pocket book he could rob from to pay for others. I will give you that he is a moderate compared to those seeking the nomination this time around.

Trump is a disgusting human being but he was certainly better then what the DNC appointed to run against him.

Trump: "I do the speech very well, so I was able to do it without a teleprompter, but the teleprompter did go out," President Trump said. "But despite the rain, that was just a fantastic evening."


Trump lies so much even HE can't keep up with his own lies. Trump said he knew the speech so well that he didn't need a teleprompter, then blamed the teleprompter malfunction for his idiotic statement that the Revolutionaries seized the airports.

Thank God for America's bold patriotic President doing this historical event. The pictures don't lie. There were over 2,500 Million People there and they ALL Love Trump
Yesterday was a proud day to be an American celebrating our independence and our founders heritage. America Has Become Great Again.

Militart parades in Washing D.C. is nothing new. Truman had one, Ike had more than one, including tanks, and so did JFK.
Trumps exhibition was an extreme example ot the typical Republican trait of wrapping themselves in the military to promote a false patriotism.
It's sad that so many Americans believe what the lying, idiot Trump says when even a third grader knows more about American history than Trump does.
What does that say about the tens of millions of American who voted for him and made him president? And that could happen again!

Jerry: "What does that say about the tens of millions of American who voted for him and made him president?"

The only way trump could get a large crowd was to insert himself into a July 4th celebration. His supporters think the crowd was there to worship the Dotard, in fact, they were there for the 4th of July and other events on the National Mall.

News Flash... Big Bobo is at 44% approval. Mostly due to the perceived sense he has managed the economy well.

Who was it that said... It's the economy stupid

Skud, regarding "Trump is a disgusting human being but he was certainly better then what the DNC appointed to run against him". True, the man is a poor representative
of the human species. History will judge what, whether he was better, based not on
his opponents, but on his performance...and we are still in his first term. His senate majority reminds us of that of Caligula's: they are either terrified, or
like the odd Evangelical base, willing to forgo their dignity and honor and core
beliefs for the advantage of some crumbs. But, I didn't praise Obama-those were Shaw's words.Obama faced a hostile congress, golfed less, had far fewer executive
orders, deliberated before speaking and acting and was beloved internationally: things we ancients have come to appreciated in our leaders. I agree that small business is the core of our economy (I always try to buy local). As for special interest groups and billionaires, they are endemic, enabled by Citizens United:
we note the NRA, ALEC, Club for Growth, Adelson, the Kochs, Mercers et. al. It appears to be a nascent oligarchy and if left unfettered we can look back to the
Dark Age scenario: Neofeudlalism. For once the Harvard Business school has it right. Short term economics is not economics at all- just ruinous opportunism.
I shan't go on, just guessing why Trump lost the election by 3 million votes...