The feckless Donald "I'm The Greatest At Everything" Trump wimps out on gun violence and goes all NRA, admits he, the Greatest Terrific Guy On The Planet, can't solve the problem (proving once again that he's all hair and no follicles):


"When host George Stephanopoulos noted how uncharacteristically can’t-do this attitude was for Trump, the latter insisted: “Now, George, I could say, oh, we’re going to do this and that and it’s never going to happen again. You have sick people in this country and throughout the world, and you’re always going to have difficulty.”

Taking a page out of the National Rifle Association’s playbook, Trump then laid responsibility for gun violence at the feet of the mentally ill. But he abstained even from advocating for more screening and services for mental illness.

In other words, Trump, like other conservative politicians he claims to disdain, shrugged.

Trump, a man who prides himself on his great willingness to speak the politically incorrect truth, dared not offend his base. Trump, who considers himself unrestrained by special interests, paid obeisance to perhaps the most powerful special interest in the country, the gun lobby (from which he seems to have cribbed his own gun policy proposals). Trump, the self-proclaimed strongman, is now mysteriously impotent." 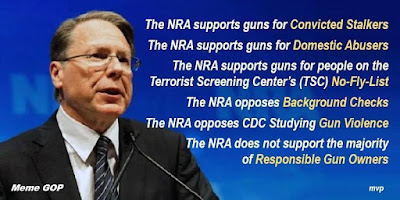 John Oliver talks about the "mental health" issue that people who don't want to talk about gun violence always talk about:

"In reaction to the Umpqua Community College shooting, Ben Carson appeared on the October 5 broadcast of “Your World with Neil Cavuto” and was asked by the host if gun control would prevent such shootings. Carson’s response was to pull out another favorite fake Founding Father quote, this one purportedly from Thomas Jefferson:

“Thomas Jefferson himself said, ‘Gun control works great for the people who are law-abiding citizens and it does nothing for the criminals, and all it does is put the people at risk.

Unfortunately for Carson, Jefferson said no such thing. The words come from a quote by Italian philosopher Cesare Beccaria, found in his book Essay on Crimes and Punishments (1809), which is now in the Library of Congress. Jefferson copied the passage into a journal, his Legal Commonplace Book, which was, as the Library of Congress tells us, “compiled while he was studying the law and containing abstracts of important cases”:'”


Meanwhile, a Stupid Party blog features a poster that claims Valerie Jarrett is an Iranian. Valerie Jarrett was born in Shiraz, Iran, to two American parents. The Jarretts moved to London, England, when Valerie was 5 years old, and eventually back to the U.S. Claiming that Jarrett is "Iranian" is like claiming John McCain is Panamanian, since he was born in Panama to two American parents.

Facts don't matter to people in the Stupid Party.

*"We have to stop being the Stupid Party." --Bobby Jindal

Hello Bobby! They're not listening!

Really, what would we do without "the stupid party"?

I mean think about all the comedic entertainment we would be losing.

Without a doubt it is a wellspring that keeps providing the absurd in American politics.

And yet, still no solutions, or even an admission, that right wing philosophy will not permit a solution. The closest thing I've received is something from a commenter named Constitutional Insurgent who says gun violence is a societal problem and can only be solved in the home and through families.

He's against almost all government involvement in the private sphere, so at least he's consistent.

Others just avoid the question...

They refuse to consider any type of national standard, registry, limits on most people and types of weapons. Even RN claims the left wants to take away hunting and sporting rifles from people, admittedly based, "on a feeling."

And that is the problem in a nutshell, as it has been since Obama became president. In 8 years, we've seldom legislated on facts and reality, preferring instead government based on conjecture, rumor, feelings and outright untruths.

It's like the folks who are claiming that the Obama Admin is ready to take away Thanksgiving and replace it with "Celebrate an Immigrant Day." If it feels right, even if it is not true, as some bloggers have actually written, go with it.

It's what we see here related to guns.

Nobody listens to Bobby Jindal.

BB-Idaho posted his comment below in the post on Australia. I think it should also be posted here as well:

BB-Idaho said...
Regarding RN and his conversations, as a retired ammunition scientist most of my
conversations have been with pro-gun zealots. Presumably they are at least as dangerous as anti-firearm zealots (plus they are armed to the teeth). Not only has the NRA enabled gun ownership by any and all (in my state a group is lobbying for
no-permit concealed carry, taking the 2nd Amendment to its ultimate; no training required, felons and schizophrenics encouraged and as the group notes, "its a God
given right". Which brings me to the theology of firearms. I recently had a conversation with a part-time preacher of the far right bent. He asked that since
I was in the industry, did I have a gun? No, having qualified on everything the US
Army had and worked with the current range of firearms routinely, I had no desire
or need. He replied that he had never had one either. BUT, at age 70, he had become convinced by his peers that he needed one for defense. From what or where,
I have no idea, but another rank amateur has joined the ranks-, mostly, I gather
out of fear that "the socialists will take our guns". He ended with "have your heard
that Obama ordered social security payments to be stopped for all gun owners?"
Given that there are 9 guns for every 10 US citizens, it is logically impossible to
do what Australia did. So RN needn't worry about the zealots. As long as the NRA
can buy politicians, even the NIH cannot study gun death statistics, oversized magazines are best sellers, crooks and nuts are free to buy their choice of weapon at any gunshow and we are supposed to keep quiet about the collateral damage. I ponder the concept of 'well regulated militia' and sigh.

You are aware that Wayne got a pass on being drafted for the Vietnam war because he claimed a nervous (mental) disorder. Maybe you were not aware of that.

Do facts matter to the weirdos on the right?

Just ask the nut who thinks Obama is going to take away social security payments from all gun owners. And then wait a day to see that idiocy posted all over the Stupid Party blogs.

Seriously. Do these people get immunized to facts?

"Do these people get immunized to facts?"

No, they listen to fox instead of facts.

"Meanwhile, a Stupid Party blog features a poster that claims Valerie Jarrett is an Iranian. Valerie Jarrett was born in Shiraz, Iran, to two American parents. The Jarretts moved to London, England, when Valerie was 5 years old, and eventually back to the U.S. Claiming that Jarrett is "Iranian" is like claiming John McCain is Panamanian, since he was born in Panama to two American parents.

Facts don't matter to people in the Stupid Party."

And some whacko thinks that because Jarrett was born in Iran it makes her an Iranian because babies born in the U.S. to illegals or legals are automatically U.S. citizens. The weirdo and undereducated pusher of false facts doesn't undeerstand that Iran doesn't have the same laws as the U.S., so comparing the two countries is stupid.

But they are members of The Stupid Party, so who's surprised?