About that Electoral College...

Please go to Infidel753 to read about how the Electoral College can be made more equitable (Hint: It wouldn't take a Constitutional amendment). 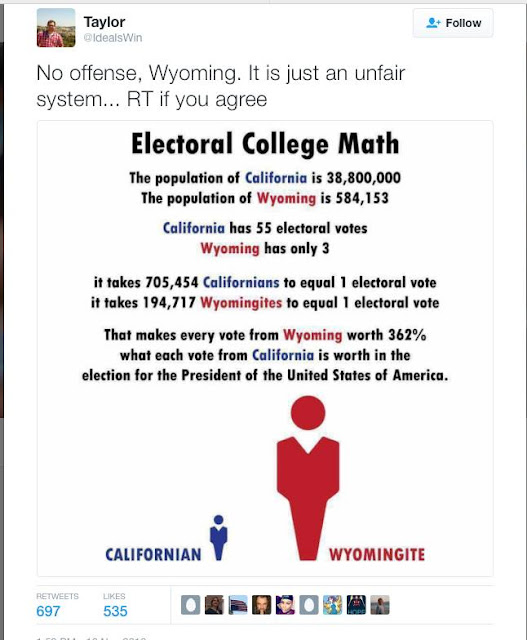 The obama administration had ample time to change the EC but they were to busy creating their disaster healthcare plan. After all if those mindless idiots would vote for a bill in order to see it they would vote for anything.
Had obama listened to someone other than valarie he could have been appointed king for life.
I heard mika on good morning joe give the reason princess -H- lost when she explained that the reason was -H- didn't go after the little guy. The total disdain for the middle always is touching when it comes from the elite.

I understand the anger at the Electoral College. However I see no way to get any type of Amendment through the states or Congress.

It is the system we have and if backers of HRC are thinking the EC kept them from the White House, that's more of the arrogance for which they are famous. The EC did not keep them from actively campaigning in Wisconsin & Michigan or from finding a way to talk to voters in areas still struggling from the recession.

Her campaign set up a strategy of being against Donald Trump and not for anything that would have markedly improved the lives of a group of people hobbled and unemployed by technological gains and a work sector that demands more education than they have.

It wasn't the EC that defeated HRC. Sadly it was HRC and her campaign.

What's amazing is that people did not see this coming.

Thanks for the link! This is probably the most effective thing we can be working on at this point. It's too late to change the outcome of this year's election, but we've got four years to make sure a travesty like this never happens again.

Dave: "What's amazing is that people did not see this coming."

To be fair, Trump didn't see it coming either, because he was setting up the excuse of the election being "rigged" to explain what he and his people thought would be a defeat.

The final count in the popular vote tells us that more people voted against Trump than voted for him.

It's true that Hillary should have paid more attention to those states you cited, but I can't blame her or her people for thinking that this country would never elect such a dangerously ignorant narcissist as its president, that common sense would prevail. But it didn't. I understand people are hurting, but to solve that problem by voting for more hurt isn't going to help those people.

Trump has already reneged on his promise not to touch Medicare, Medicaid, and Social Security, and Ryan has given us his word that he going after the safety net for millions and millions of Americans. Bet on it.

And just yesterday I read that some Republican sees the possibility of a registry for Muslims, if not internment camps.

Who would even believe this country would be discussing this in the 21st century?


Infidel753, I've contacted my representatives and let them know how I feel about the EC.

This is from Bruce Lindner:

This is kind of a lump-in-the-throat, personal observation about the election:
I called my parents last night to check in on them. I asked my dad (who's 97 years old) how they were holding up after last Tuesday. After commiserating for a minute, he let out a sigh of resignation and said "Well, I'm almost glad I won't be around to see how this all plays out. But I'm worried about your future, your brother's future and the grandkids. This guy stands for everything we fought against 75 years ago."

(My father didn't serve in the military during the war. He was recruited by the government to work stateside on the then top secret Manhattan Project).

He's almost certainly right. For the remainder of their days, my parents will live in anxiety for the future of the country and of our family. After nearly ten decades of two idyllic American lives, both of them suffering through the Great Depression, then World War II, the relatively easy decade of the '50s, the tumultuous '60s (I may have contributed to their angst during that period), then finally retiring in the '80s and settling into their golden years to enjoy life ... only to have their serenity twisted into melancholy and dread during their final days by the election of this openly racist, misogynistic, grossly UNQUALIFIED Commander in Chief, is a travesty and a rebuke of the American Dream.

On behalf of my parents and the other few remaining survivors of the Greatest Generation, thanks a hell of a lot for that, America. Four hundred-thousand of them lost their lives trying to defeat fascism, and you brought back their worst nightmares by reincarnating its very tenets, right here, this very month, on American soil.

The empowerment of this arrogant demagogue and his white nationalist advisors is the ultimate slap across the faces of the heroes of World War II. And that really pisses me off.

Correct but tiring. Had the tables turned and -H- won I doubt there would be all this fuss and Dave was correct, she did it to herself. There is a whole country between oceans filled with small towns and middle class families that the clintons ignored and it bit her.
I cannot imagine how she must feel going from the anointed one to losing to an egotistical blow hard.

So I guess you favor your elected officials voting for something they have never seen. I do have some ocean front property in Arizona you might be interested in.

We live in interesting times.

Not only is trump a minority president, but more people dislike him than like him.

There is no honeymoon for Donald Trump, as Gallup has found that the president-elect is the least popular winner of a presidential election in the last 24 years.

Meanwhile, Mr. Obama's favorability ratings are still climbing. AS of Nov. 13, it was almost 70% job approval.

Go ahead, vote for the guy with the loud voice who hates minorities, threatens to imprison his opponents, doesn't give a fuck about democracy, and claims he alone can fix everything. What could possibly go wrong.

- The people of Germany


"Like any number of us raised in the late 20th century, I've spent my life perplexed about exactly how Hitler could have come to power in Germany. Watching Donald Trump's rise, I now understand."

Like with World War II, one domino toppling will lead to another to another and another...

Who will be left to step in and be the beacon of hope this time? Soon to be the world's largest economy, China, is too busy celebrating the defeat of TPP and their dreams realized of supreme dominance over South East Asia.

Yup, with eyes closed and heads buried in the sand America is well on the road to decline. That Shining City on a Hill has just become a cesspool of lies and corruption.

Utter nonsense from Skidmark - as usual! Clinton campaigned hard in middle-America. It's easy for dolts like that ever annoying Mika and Joe to armchair quarterback but it's just not accurate. Still, that seems to be the current band marching through the DNC right now -- let's all join the Republiscumbags in bashing Hillary! Yeah. Except, it's not accurate nor is it fair.

What exactly is wrong with Obamacare? Short of single payer, what would you recommend? At my age, I need a doctor. Dont' you care at all about people without insurance? People that couldn't get affordable insurance before Obamacare? People with serious conditions that were denied coverage? WTF are you even talking about. Trump has already back-pedalled on Obamacare. Do you stand to the right of Trump? If only he were a closet liberal. He doesn't seem to have the brainpower to be a Manchurian candidate to govern just to the left of the Clintons. He is certainly effeminate. I'm not saying he is gay. But, compare him to Teddy Roosevelt. Now that was a real outdoors kind of a guy. "Bully!" Dewd had balls the size of baseballs.

Time for some comic relief. Check out as many of the "Sassy Trump" videos as you like. Peter Serafinowicz has been compared to Paul Lynde.

Two observations. 1) Many on HRC's on staff have noted the HRC campaign bears responsibility for the loss. 2) Obamacare is not affordable for many. Those who are neither poor or wealthy. As usual the middle is screwed and forgotten.

Its all about money and politics.

FJ
The term affordable healthcare is the problem. Unless you get massive federal subsidies obamacare is not affordable. If you qualify for subsidies prior to obamacare there was medicaid. If you don't qualify for subsidies you pay for a lot of coverage you don't need and then you have to meet the deductible.
Prior to obamacare you could get a high deductible policy for under $150 a month is you were in your 20's. Now you can get a higi deductable policy for $1100 a month but my son does have pregnancy benefits?
There are parts of obamacare that need to stand and preexisting conditions is one of them. The kids till 26 is questionable but OK to give them a break.

The most absurd part of obamacare was when princess botox said you had to pass it to see it. Shows the intelligence and corruption of our elected elite.

Thank you for talking to me Skudrunner. I appreciate it very much. Voices such as yours are hard to find.

I guess that I am lucky enough to say that Obamacare really didn't make much difference for me personally. My wife and I have always paid our way in this world. This reflects many decades of planning and payment. But it has been nice to know that we have a way clear to continue to receive full coverage into our old age that we can hopefully continue to afford.

That could all be destroyed if Ryan has his way with destroying Medicare. At fifty-seven years of age, I am not eligible to receive Medicare until August of 2024. If I do not receive this benefit at that late date, I shall be very much hard-pressed to pay for the rest of my life.

These people are monsters.

The Trump presidency must be obliterated. And the sooner the better.

How exactly are we to obliterate the tRump pResidency sooner rather than later.

Answer... flip congress in 2016 and in the meantime dems, independents, and reasonable and rational republicans must unite in congress and put up a wall of obstruction exactly like one republicans placed in front of President Obama.

Good luck to real Americans as they face demon tRump and his cheif strategist and advisor Bannon.