"In a stunning speech on Thursday at a first-of-its-kind summit on anti-Semitism, Jonathan Greenblatt, the CEO of the Anti-Defamation League, pushed back against the rising tide of hatred in this country with an extraordinary promise:

And we must stand with our fellow Americans who may be singled out for how they look, who they love, where they’re from or how they pray. And let me say this. There recently have been reports that the new Administration plans to force Muslim-Americans to register for some sort of master government list. Look, Islamic extremism is a threat to us all. But as Jews, we know what it means to be registered and tagged, held out as different from our fellow citizens. As Jews, we know the righteous and just response. All of us have heard the story of the Danish king who said if his country’s Jews had to wear a gold star … all of Denmark would too. So I pledge to you right here and now, because I care about the fight against anti-Semitism, that if one day in these United States, if one day Muslim-Americans will be forced to register their identities, then that is the day that this proud Jew will register as a Muslim.Because fighting prejudice against the marginalized is not just the fight of those minorities. It’s our fight. Just as the fight against anti-Semitism is not only the fight of us Jews. It’s everyone’s fight. 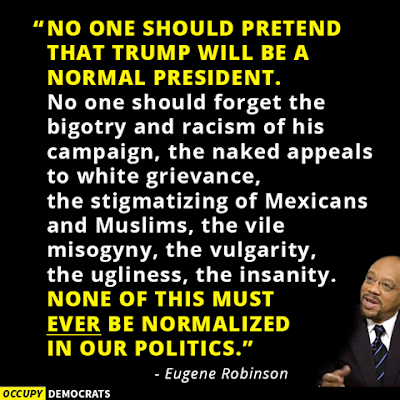 Agreed, Shaw, Hillary Clinton won the popular vote AND the electoral college (although it was stolen). Donald Trump is a racist and a bigot. Barack Obama said Trump was "uniquely unqualified" to hold the office. NOTHING HAS CHANGED! He is STILL unqualified.

And he's going to "drain the swamp" by stocking his administration with lobbyists, Washington insiders and f*cking neocons? One of the concerns about HRC was her hawkishness, but will a Trump administration be less hawkish with John Bolton as Secretary of State?

Trump lied to get elected. Everyone but Trump voters KNEW he was lying. About EVERYTHING. A president never keeps all his campaign promises, but it looks like Trump will keep fewer than any president before him. I wonder if he will keep any of his promises. He's going to appoint conservative SCOTUS judges. If enough, Roe V Wade may be overturned.

I *thought* we were moving in the right direction with marriage equality, HRC supporting getting rid of the Hyde Amendment, possibly a move to single-payer, etc. Now, under One Party rule and a Conservative SCOTUS (for the next 30-40 years!), we're going to be moving in the WRONG direction.

We need some comic relief. One of my favorite songwriters.
I know it was written for Chucklenuts but it still works

Connie, don't lose heart. Trump is a minority president. People may think that's meaningless, but as he begins his fundamental transformation of America for the worse, he won't have the American people behind him, but he will have the racists, bigots, sexists, anti-Muslims and the anti-decency part of the US population.

He's got the KKK and White Supremacists going for him. So there's that.

He's entering office with THE LOWEST APPROVAL RATING OF ANY PRESIDENT IN 24 YEARS!

Ducky, thanks for that. It does work for the incoming disaster.

The 2016 election is over. Now is the time to look to the 2018 election. Look forward, not behind. Get enough Democrats out to vote, and control can be taken back. 2016 was a Democratic failure. Don't make 2018 another one.

Jerry's right. The important thing to focus on now is what we can do, what actions we can take to get better results in the future -- not only for the next election, but in the sense of mitigating the worst effects of Trumpism in the meantime.

Greenblatt's statement is an example of the latter. Such strong gestures, or the promise of them, can help bring home to people the magnitude of the things Trump has threatened to do. The hard-core Trumpanzees will be unmoved, of course, but they were always dead to any feelings but their own. The point is to move those who are undecided or withholding judgment on the situation. Large-scale changes in public opinion are possible -- look at the dramatic shift toward mass acceptance of gay marriage in less than 20 years, for example. Trump's personal unpopularity is a foundation to build on -- any policy he proposes will start out being suspect in the eyes of much of the population.

Amen to all of the above!