Nothing good will come of it.

We've witnessed in less than a year how damaging Trump's presidency has been to America's reputation at home and abroad.

Now the people of Alabama are ready to send to the US Senate a lawless man who was kicked off of the state supreme court and who has been accused by several credible women of molesting them when they were teenagers. The current GOP is willing to overlook Moore's disgusting behavior so that they can keep a senate seat.

When Moore wins the senate election in Alabama (and there's no question IMM that he will win), the current GOP will have sealed its reputation, for a least a generation, as being the party of  a self-admitted sexual assaulter (Trump) and an accused child molester (Roy Moore).

We've already seen that young people have abandoned the party and the GOP is losing women's support with each new poll taken.

"Now that Trump has been shown to be just as ignorant, unhinged, racist, incompetent, authoritarian and unfit as his critics said, the Trump voters (sporting an uncanny willingness to deny reality or just lie) don’t seem so interesting; they just sound wacky. Rather than the repositories of moral truth, they sound mean-spirited and selfish. They can’t see the real victims in society because they are convinced they’re the real victims. "

"Donald Trump, Roy Moore, and the Degradation of the G.O.P. In less than a year, the President, with help from the Alabama Senate candidate, has so damaged the Party that it may never recover. What would they tolerate in order to secure the fifty-first vote? Put another way, if the Party is willing to give its money and its credibility to protect a candidate accused of molesting teen-agers, what might it talk itself into doing to protect the President? Robert Mueller may be interested in the answer."


Meanwhile, the GOP's self-admitted sexual assaulter and serial liar continues his pathology of incessant lying each time he speaks to his supporters:

"Donald Trump makes 21 false claims in Missouri speech about tax plan The Star’s running tally of every false thing the president of the United States of America has said since his inauguration — an average of 2.9 false claims per day."


Nothing good will come of it.


"The pre-Trump Republican Party is dead; the Zombie Trump Party now lives in its stead, devoid of principle, feasting on fear and rage, foreign to moral framing." --Charles Blow 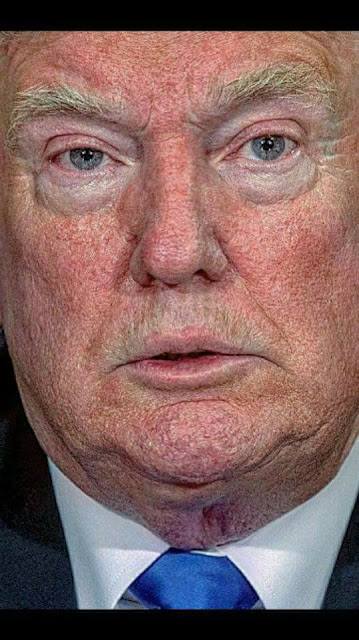 
• “For most of the year, people inside and outside Washington have been convinced that there is a strategy behind Mr. Trump’s actions. But there is seldom a plan apart from pre-emption, self-defense, obsession and impulse.”
• Armed with Twitter and fueled by Diet Coke, the president spends at least four hours a day — and sometimes as much as twice that — in front of a TV.
• A novice who is skeptical of anything that does not come from inside his bubble, Mr. Trump is, aides say, learning that a president cannot rule by fiat but must work with Republican leaders.
• Senator Lindsey Graham, once a fierce critic of Mr. Trump’s but increasingly an ally, said the presidency was still “a work in progress.” At this point, Mr. Graham said, “everything’s possible, from complete disaster to a home run.”

YOU KNOW WHO said...

Seen at a far right blog:

"Can any of YOU point out where Trump has been anything remotely NAZI?
I’d like to hear it."

Today's immoral GOP. They deal with their degeneracy by pretending Trump never said the things he's said. Trump's been trashing the media since he ran as a candidate, something Hitler and his Nazis did in Germany. Trump's been threatening to jail his opponents since he was a candidate and he's still doing it, something fascists do all over the world. But the far right sees nothing wrong and happily agrees with Trump in his goal to destroy the First Amendment and America. They are really that sick.

Make Roy Moore the voice of the party.
That should speed the attrition and party leaders probably know that.

They're stuck with Moore.

Ducky... whether they win or not, the GOP has become the party that accepts sexual harassers and child molesters. All in the name of repealing Roe v Wade...

Chris Cillizza from CNN (formerly from the Washington Post), mentioned a New York Times article that wrote before taking office, Mr. Trump told top aides to "think of each presidential day as an episode in a television show in which he vanquishes rivals." How screwed up is that?


Possumlady, anyone with a functioning brain and with a modicum of moral values knows Trump is unfit in all categories to be POTUS.

But 30% of the American voting public is unreachable because their heads are firmly stuck up in a very dark place.

I know that Roy was a pedophile and a creep 40 years ago, and that if it weren't for the statue of limitations he could probably be arrested for fondling a 14 year old back then. And yet, that said, there are WAY more important things he's said and done recently that are stronger reasons to vote against him.

Seriously, he's a monster. He was a monster before anyone came forward with these stories.