Trump is NOT out of hospital care...

he's just been moved to his in-house medical unit while he deals with Covid-19.

“President Trump will continue to receive around-the-clock medical care and monitoring from his physician and a team of dedicated physicians and nurses in the White House Medical Unit who function out of a state-of-the-art clinic, which includes many of the things a person would see in an urgent care clinic and much more, to ensure the Commander-in-Chief makes a full recovery and can continue to discharge his duties.” --White House spokesman Judd Deere 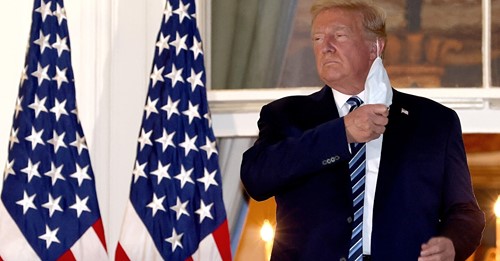 Meanwhile, to show his cultists how macho he is,Trump walked up the stairs to the balcony off the private quarters of the White House, ripped off his masked, and could be seen struggling to breathe as he saluted Marine One taking off from the WH grounds. He then pivoted toward the private quarters and entered without a mask. Presumably, staff would be there to welcome Trump who's only concern is for himself and his photo-ops, not for the well being of the folks who wait on him. Trump is spreading the virus. In his extreme desire to project positivity and calm, he's flagrantly exposing others to his infection. There is nothing unwitting about it. He is willingly exposing his staff and others in order to keep up a facade that only the densest of his supporters will believe. It's insane.

IOW, Trump's Covid-19 infection has done nothing to make him aware of anyone but himself.

"Ilan Schwartz, an assistant professor at the University of Alberta’s division of infectious diseases, said the president appeared to be struggling to breathe in a brief clip that showed him standing outside the White House. “This is a textbook example of increased work of breathing,” Schwartz tweeted." --WaPo
Posted by Shaw Kenawe at 8:12 AM

What else has been on any news cycle for days and days? Heard any more talk about that disgusting performance at te debate? Trump's rudeness, his pathetically childish behavior? Heard any more about those taxes? I mean NOT taxes? How much reporting has been done on Melania's 'Eff Christmas tape'? Trump struts and preens with the whole world forced to watch this unending stream of pathetic photo-ops. I think it's possible he was infected during the debate and saw an opportunity to infect Biden, so he took it.

His unending thirst to hear his name drives him. Don't look for three-dimensional chess from this guy hes just not that bright. H's driven by more base, more childlike instincts, by the hole in him that needs constant assurance that he's the best, the greatest, the brightest, when in fact he's none of that. He's a failed president and human being.

Four weeks from today Trump needs to lose by the biggest landslide ever.

"learn to live with it" says the hopped-up-on-drugs plutocrat who has free healthcare and doctors on the premises and a hospital in his house and a helicopter in his back yard" Jeff Tiedrich on Twitter.

According to the CDC and medical professionals everywhere, President Trump is still shedding the virus and is contagious. Guidelines call for him to isolate himself and wear his mask when he is near others.

Why is he not following his own advice?

And why won't the White House tells us when was President Trump's last negative test? I suspect it is because the answer would show that he did not test before going to the debate, as was required, and knowingly that night exposed people.

“We found that, on average, those who voted for Trump and those who voted for Clinton did not have wildly different views of Trump’s personality. Both groups saw him as particularly sadistic and narcissistic, and even though the two groups disagreed about how prominently he displayed these traits, his own supporters still judged him to be more sadistic and narcissistic than 90% of people,”

The above is an interesting article in full.

It's like shirtless Putin on a horse. The Grand Old Plutocrats have turned America into Russia. No wonder sane Russians drink so much vodka.

Trump gasping for breath on the balcony last night: "I am indestructible!"

This is straight, and I mean STRAIGHT, out of the authoritarian playbook.


Then Bob Woodward came on and said he'd known Gergen for 50 years and he'd never heard him say something so extreme. And then went on to basically agree with Gergen.

Now Woodward and Wolf Blitzer are wondering out loud whether there's anyone in the president's family or inner circle who can stop him. Woodward says we're in the middle of a government meltdown.

Woodward says "Where is the Republican leadership?"

"Where is the Republican leadership?"

We're looking at it staring us in the face and laughing hysterically at us. We are seeing that which we never deamed could ever happen in America.

Well, look at us now. Fascism's father is smiling down at trump and the GOP.

The Joint Chiefs of Staff are all in isolation after being exposed and a positive Covid test. All of them! Our entire top level of military leadership. The President's number 1 job is to protect the US. And now his lack of leadership has put our collective defense in jeopardy.

Anyone think a single GOP Senator or Congressman will see this as a problem?

President Trump has been, and continues to be a total failure.

There is no government.

No one can work at the White House because of Trump and Covid. Our top military leadership cannot meet together in the event of a crisis. The country does not trust a word coming out of the President, or his spokesmen, because from "The biggest crowds ever" inauguration day lie to the present, they have lied repeatedly. About everything!

And yet, no one, not one Republican serving in government will play the Howard Baker role, grow a pair and call for Trump to resign. I'd hate Pence, but right now I'd take him with a sigh of relief. Hell, I'd take Kermit the frog.

Dave this is the result of an entire political party and its head [Trump] ignoring science and reality. Willful stubborn stupidity caught up with the Republican Party and Donald Trump. Trump knew from the beginning how lethal Covid-19 is and went with deception and misinformation to the American people.

200,000+ Americans dead; the White House infected, Senators infected, and now the Joint Chiefs. The blame will be placed squarely on Trump's shoulders, where it belongs. He spoke of American carnage at his inaugural, and he delivered it to us in just 3 1/2 years.

THE GOP = CLEAR AND PRESENT DANGER

THE REST OF AMERICA IF TRUMP IS REELECTED = ROYALLY FUCKED.

TRUMP HAS WILD MELTDOWN: Several days into his COVID-19 treatment, Pres. Trump has tweeted and retweeted more than 30 times this morning, spreading blatant lies and conspiracy theories. He tweeted the lie that 'DEMS WANT TO SHUT YOUR CHURCHES DOWN, PERMANENTLY.' He has demanded that Pres. Obama be subpoenaed over a so-called 'Obamagate.' He has called for 'PATHETIC' members of the FBI and CIA to be prosecuted over the Russia investigation. He has retweeted conspiracy theory tweets from 2018. He retweeted a conspiracy theory video falsely claiming that COVID-19 isn't really responsible for the deaths of more than 210,000 Americans. He retweeted a claim that Democrats seek to 'turn us into a third world hellhole.' And he has repeatedly tweeted about Hillary Clinton— all before 9:30AM. The White House has not been transparent about the state of the president's health or the medications he is receiving.

Curella/biden will win but I doubt they will get 49 of 50 states as RR did so never trumper I doubt your wish will come true.
To bad we don't have a better choice but at least the next four years will be less eventful with harris in charge. New Cayman bank accounts will be massive come December as the rich will seek shelter. Unfortunately the middle class will be hit hard so the swell guys wish may come true.

I am surprised no one on the trump side pointed out he put state governors in charge of masks, shut downs and how to handle covid. Cuomo did a marvelous job demanding respirators that were never used and a hospital ship that remained empty. He was successful in managing nursing homes.

OT - pence is proving he's as big a liar as trump. AND THAT is damn hard to do.

Almost as rude and disrepectful as well.

skud do you ever tire of whining?

Your prediction of the middle class being hit hard is rich. Go ask middle class families how they're doing with their job losses, inability to pay their mortgages, educate their children, and pay for medications. Trumpers really do live in an alternate universe.

PS. Trump enriched the already rich with his permanent tax cuts for the 1%.

RN, Pence must have been coached to interrupt and talk over his time limit.

Harris did well. As well as can be expected against another liar and dissembler.

Ms Shaw I will stop whining if you will send me those rose colored glasses you wear that make the swell guy look like a prince.

The middle class is being hit hard by a virus not by an over regulating, over taxing administration who only cared about special interest groups and of course the true rich.

Gosh Shaw, those rose colored glasses skud speaks of? Methinks he ought to check the ones he is wearing.