If he doesn't kill his cultists with his unmasked Covid-19 rallies, he'll freeze them to death!

"President Donald Trump left several thousand of his supporters stranded at Eppley Airfield after his event in Omaha Tuesday night.
After the President boarded Air Force One and departed the state, many of the attendees, some of whom waited more than four hours to listen to him speak, stood in the freezing temperatures on a private road in the middle of the airport.
CNN’s Jeff Zeleny reported “thousands” of people were stuck in the cold more than an hour after Trump took off from the airport. According to a Twitter account named “Omaha Scanner,” police officers located two groups of elderly Trump supporters shortly after the event ended who were struggling in the cold.
One group was reportedly frozen in the cold and unable to move. Another complaint included a call for a medic to assist a 68 year-old man who complained of hypothermia and possibly had an altered mental status.
The event itself seemed poorly planned from the beginning.
These people got to see first hand that he doesn't care if they freeze to death. Poorly planned event almost got people killed, they feel no responsibility for the safety and well being of people they brought out into the freezing cold."
MAGA! " 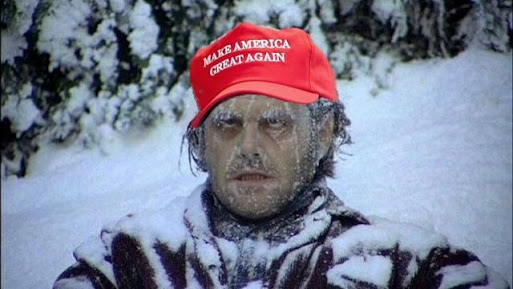 *Everything Trump Touches Dies
Posted by Shaw Kenawe at 10:29 AM

The picture of Jack Nicolson in The Shining is a stroke of genius!

I wonder what the Orange Turd would look like frozen to death. I think America would breath a sigh of relief if it happened now.

The event itself seemed poorly planned from the beginning.

That could be said about everything Trump has ever done. This guy couldn't plan a fart and have it come out right.

Snort. They had that coming.

Nobody could have foreseen the cold. It was a Canada wind, swooped down into Nebraska without warning.

The Canadian freeze. Totally unnecessary and unprecedented. If Canada had built a wall, that wind would have been stopped, but noooo, they unleashed that wind on the world. I hear Jacque Chirac's laptop has been found in a storerrom at a Tim Horton's coffee shop in Toronto and was turned over to Lev Parnas and lo and behold, Joe Biden was in on it. With Willie Brown, who once slept with Kamala Harris.

Twitter and Jack Dorsey won't publish the story because they know it will make Biden and Harris look bad and besides, they censor everything. But it's true and you liberals should be talking about it. The Canada Wind.

If you really loved America, you'd be asking the FBI and William Baar to arrest Jacque Chirac and get his laptop. You should see what they are saying is on the hard drive. This Canada wind will probably doom Biden if it gets out.

You win the internet today.

Hundreds of Trump supporters were left in the freezing cold for hours after a rally at an airfield in Omaha, Nebraska, on Tuesday night; 7 people were taken to area hospitals, suffering from a variety of conditions, police say.

Only Trump and his incompetent team could manage to f up like this...this is event planning 101...

Know who didn’t get stranded? Biden supporters, they drove to Joes rally, they sat safely in their cars and when it was over they drove away...be like Joe.

President Trump: "If you vote for Biden -- it means no kids in school, no graduations, no weddings, no Thanksgiving, no Christmas, and no Fourth of July together."

All those things have already happened under Trump and millions of Americans have to cancel their plans for Thanksgiving and Christmas because of surging Covid.

Trump is talking about what’s happened during HIS presidency, NOT a future Biden presidency. I wonder if his cultists get it.

Forget it. It’ll go over their heads.

There is only one fault here, the protection mob of the Republican Party, if they had ethics or a moral compass. Alas with them, all is alive and well in the game of total power, power which has corrupted totally. They have successfully stacked the courts, ruthlessly controlled the Senate but there was no crime that they would see nor speak from their autocrat.

With a democratic Republican party he would have been justly impeached. This nightmare would have ended a year ago.


Heat at Trump rally sends a dozen attendees to the hospital

Officials at the Trump rally in Tampa, Florida, said a total of 17 people needed medical attention

A crowded Trump rally in steamy Tampa, Florida, on Thursday resulted in 17 attendees needing medical attention, with a dozen being taken to the hospital, fire officials told NBC News.

Trump spoke for just under an hour in 87-degree heat at the event outside of Raymond James Stadium to a largely mask-less group of supporters.

A fire truck at the rear of the rally sprayed water in the air to rain down on some rallygoers, but the heat was too much for some attendees, many of whom had been waiting for hours. Tampa Fire Rescue said one of the attendees fainted and another had a seizure. The other 10 who were taken to the hospital were just listed as "sick" with no other details.

The incident came two days after 30 rallygoers in Omaha, Nebraska, needed medical attention after transportation issues resulted in hundreds of attendees being stuck for hours in the freezing cold. Officials said seven were taken to area hospitals with a variety of ailments.

The temperature in the area was in the mid-30s at the time but as low as 27 degrees with wind chill.

Trump's killing off his cultists!