With a week to go, this is Trump's strategy

"It Didn't Have To Be This Way Were It Not For trump!"

Trump has no plan, except this one: 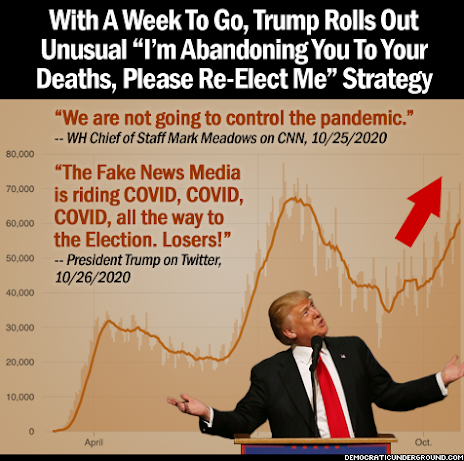 Oct. 27, 2020 at 11:32 a.m. EDT
"Twenty former U.S. attorneys — all of them Republicans — on Tuesday publicly called President Trump “a threat to the rule of law in our country,” and urged that he be replaced in November with his Democratic opponent, former vice president Joe Biden.
“The President has clearly conveyed that he expects his Justice Department appointees and prosecutors to serve his personal and political interests,” said the former prosecutors in an open letter. They accused Trump of taking “action against those who have stood up for the interests of justice.”
The letter, signed by prosecutors appointed by every GOP president from Eisenhower to Trump, is the latest instance of Republicans backing Biden. In August, dozens of GOP national security experts signed a full-page newspaper ad endorsing Biden over Trump."
Posted by Shaw Kenawe at 10:09 AM

If you hate Democrat scum, as I do, forcing their lame ass mandates on you, it will all be over soon. When you see them out in public, make like Maxine waters and tell those pedophile defenders what you think of them. At the gas station, and grocery store...

If Trump wins, we will see the return to normal. A return of salad bars and buffets, open bars, restaurants, Hair salons etc. .

If Trump loses, you can Kiss salad bars and buffets goodby, as they will become tales of the past.

What seems to have excaped your confused brain is that Trump is and has been the POTUS since January 20, 2017.

You are a perfect example of a Trumper who doesn't understand what the hell is going on right in front of you. Your ridiculous comment is proof of that sad fact.

Ariel... you are so deluded.

225,000 Americans dead due to a pandemic and you're worried about salad bars and buffets?

Maybe you missed something in your economics 101 class... businesses will return when business owners figure they can make money operating that business.

Until there's a vaccine, Americans feel safe, Americans trust their government to tell them the truth, Americans believe a POTUS knows what he's talking about, there will be depressed demand. I live in Las Vegas, ground zero for buffets and salad bars... even the casino owners, Dems and Republicans alike, say that model is DEAD.

Yes... let's mourn the lowly salad bar forgetting the thousands of lost American lives that could have been avoided if literally one man, President Trump, had not needed to be a strong man, would have worn a mask, and urged everyone to wear a mask.

Ariel, just one of millions without a clue. No doubt due to willful ignorance.

Those folks who want what trump is selling, snake oil really, should simply move to Russia or North Korea. They would no doubt be happy being led by a dictator the likes of of whom trump would idolize.

Dave, the Trumpers must be really nervous about the coming election. I've had dozens of them here telling me how corrupt Joe Biden is, what a great job Trump has done, and essentially being angry, whiney, and factless.

Ariel is a perfect example of how selfish a certain group of Americans have become in he Era of Trump. My parents lived through WWII. They told me about the sacrifices Americans made during that time, not the least of which was sending their fathers, sons, husbands to fight the Nazis -- y'know the people Trump called "losers and suckers."

This year, during a lethal pandemic, Americans were asked to social distance, wear masks, and stay away from large getherings. Along comes someone like Ariel who whines about salad bars because that will inconvenience her. Forget the idea of all of us doing what we can to make sure our family, friends, neighbors, and ourselves get through this, even if it means no more salad bars!

I allowed the comment here so that others can see how childish, spoiled, and uncaring so many Trumpers are. They learned this despicable behavior in a pandemic from the guy at the top: Donald J. (I mock mask wearing Americans) Trump!

Too bad Ariel and others like her aren't smart enough to think for themselves and practice what a lot of them should have been taught as children: Human decency and human kindness.

RN, "Ariel" really doesn't know what's going on. She wants to get back to normal, when what's going on at this moment is TRUMP'S NORMAL! HE'S THE POTUS! Apparently that has escaped Ariel's sharp mind! LOL!

Trump’s closing strategy: Blanket the country with super spreader rallies and kill as many Americans as possible

Just saw on CNN: "Ten GOP senators have 'come together...to make a plan...[so] if Trump provokes a constitutional crisis, which they believe he will,' they can "find a way to let law and order and the Constitution prevail." Terrifying that it's come to this."

No president in U.S. history even suggested he would not accept the election results.
Trump is a menace to America. Throw the bum out and never speak of the bastard again!

Loons on both sides and the mermaid is certainly at the top of the heap although I will say I miss salad bars and vegas. Next would be someone who said people should trust their government to tell them the truth. Like you can keep your doctor, this will lower your premiums, china is a competitor not an enemy, nothing to worry about come on down and celebrate and this is just like the flu.

Public education and teaching to the lowest common denominator in a classroom has created a society who lacks the ability to think and accepting personal responsibility is reserved for just a few. Remember a great man who said the most terrifying words are I'm from the government and here to help. Granted trump made a huge mistake, he let states control how they would handle covid and cuomo did a great job of clearing out nursing homes.

Dunk... you don't think their plan is to make sure Trump remains in office no matter what?

They don't believe in "Law and Order" unless it is useful to them. That's been shown in abundance.

Thr loons are MUCH loonier and FAR more dangerous on the trumpian righg skud. I repeat, the LOONS on the right are FAR more dangerous. So, walk the BS talk of equivalence if you like skud, but folks who have their thinking caps on know w/o so much as a single doubt it is PURE BULLSHIT

Did I mention that Trump is a fking idiot, liar, and mental case?

Just before Trump walked out, he brought up Stahl's earlier comment about 'tough questions'.
'Excuse me. Lesley you started with your first statement was are you ready for tough questions. That's no way to talk,' Trump told Stahl.

He also pointed out that Democratic nominee Joe Biden gets 'softball after softball'.
'I've seen all his interviews, he's never been asked a question that's hard,' Trump said.

The president also pushed that the '60 Minutes' interview wasn't supposed to be hard.
'When you set up the interview you didn't say that,' he told Stahl. 'You said: "Oh, let's have a little interview." And here's what I do say, you don't ask Joe Biden. I saw your interview with Joe Biden.'

13 million unemployed. Fewer jobs than when Trump took office, a first for an modern American President.
Nothing to brag about, Donald. And he wants another 4 years to do more harm???