As of now, I've yet to hear or see anything from Trump or his A.G. on this outrageous attack on American democracy. Instead Trump was rage-tweeting about injuries to his delicate psyche and acting like a maniac.

I've heard nothing from his lap dog Attorney General Barr.

The Plot Against Gretchen Whitmer Shows the Danger of Private Militias

These groups have no constitutional right to exist.

"In the swirls of disinformation that now pollute our political discourse, one is particularly dangerous: that private militias are constitutionally protected. Although these vigilante groups often cite the Second Amendment’s “well regulated militia” for their authority, history and Supreme Court precedent make clear that the phrase was not intended to — and does not — authorize private militias outside of government control. Indeed, these armed groups have no authority to call themselves forth into militia service; the Second Amendment does not protect such activity; and all 50 states prohibit it.

The danger of these groups was brought home on Thursday with the announcement that the F.B.I. had thwarted a plot by people associated with an extremist group in Michigan to kidnap Gov. Gretchen Whitmer and overthrow the government."

"After news broke that a group had allegedly hatched a plot to kidnap her, Governor Gretchen Whitmer of Michigan said she received well wishes from prominent officials, among them Democratic presidential nominee Joe Biden.
Also on the Michigan Democrat’s call log: Governor Charlie Baker. Whitmer, speaking in a CNN appearance Thursday night, specifically said Baker was among those who reached out to her, holding the Republican governor up as a contrast to President Trump, with whom she has feuded, including after Thursday’s news of the criminal charges surfaced.
“I’d like to acknowledge Charlie Baker, the governor of Massachusetts, who called to check in on me,” Whitmer told host Erin Burnett. “That’s what decent people do. That’s what good American leaders do.”
Here is Governor Whitmer in her own words:

When I addressed the people of Michigan on Thursday to comment on the unprecedented terrorism, conspiracy and weapons charges against 13 men, some of whom were preparing to kidnap and possibly kill me, I said, “Hatred, bigotry and violence have no place in the great state of Michigan.” I meant it. But just moments later, President Trump’s campaign adviser, Jason Miller, appeared on national television accusing me of fostering hatred.

I’m not going to waste my time arguing with the president. But I will always hold him accountable. Because when our leaders speak, their words carry weight.

When our leaders encourage domestic terrorists, they legitimize their actions. When they stoke and contribute to hate speech, they are complicit. And when a sitting president stands on a national stage refusing to condemn white supremacists and hate groups, as President Trump did when he told the Proud Boys to “stand back and stand by” during the first presidential debate, he is complicit. Hate groups heard the president’s words not as a rebuke, but as a rallying cry. As a call to action.

*****************************
Trump is a failed human being and a failed American president, and he does not deserve re-election. Every day proves that. He is incapable of showing any human decency. This is just another example of his dreadful inability to lead.
The worst example is the 210,000 dead Americans on his watch from his incompetent handling of Covid-19 pandemic, of which he himself is infected. 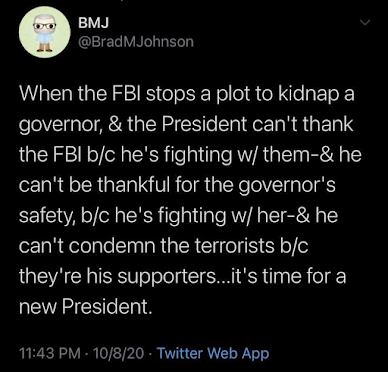 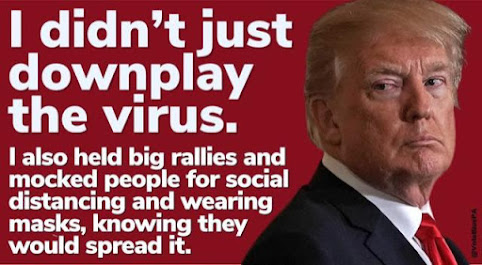 OK Shaw... we've had about enuf of your liberal namby pamby stuff. These folks are true Amerikan patriots. They LOVE AMerican more than you or your librul commie friends will ever be able to. That lady WENCH had no rite to tell us what to do! This is AMerica, land of the free and home of the braves.

You wait until the elecshun, you'll see. Prednisent Trump is gonna be elected again and then that WHITMAR and HILLARY will ge what they got coming!

Dave can you or anyone imagine if a group of Black men did this? Or a group of Middle Eastern Muslims? The folks on the Mother Ship and the other far right blogs would have blood coming out of there eyes and ears from the outrage over terrorists trying to take down a state government! But because the governor is doing what she's supposed to do to keep her citizens safe during a deadly pandemic and she's a Democrat to boot, those bloggers have nothing to say.

No Antifa involved in this despicable plot. Remember that Barr designated them as a terrorist group! And here a real terrorist group -- White Supremacist terrorists are involved. The very group the FBI said is the biggest threat to the United States.

"The FBI revealed Thursday that it thwarted a plot to kidnap Michigan Gov. Gretchen Whitmer, unsealing charges against six people who it said contemplated a violent overthrow of the government as state authorities charged seven more who they said wanted to attack police and ignite a civil war.

The plotters, according to an FBI affidavit, seemed to be motivated by their belief that state governments, including Michigan’s, were violating the Constitution. One of those involved complained in June that Whitmer (D) was controlling the opening of gyms — an apparent reference to coronavirus shutdown restrictions. But unbeknown to them, the FBI had confidential informants recording many of their discussions, according to the affidavit.
President Trump has been publicly critical of Michigan’s leaders because of the state-imposed measures to stem the spread of the coronavirus, tweeting in April, “LIBERATE MICHIGAN.”
There are two immediate points here: First, this should be another case in which Trump realizes that he needs to be a lot more careful with his language of incitement, though of course he will not for a second treat this as a teachable moment.

Second, this may bode very badly for this fall, since it heralds the possibility of more right-wing violence should Trump lose the election, declare it rigged and mobilize his supporters against it in some way.

Both these points come to me by way of Elizabeth Neumann, the former senior official at the Department of Homeland Security who recently stepped down and has since been pointedly critical of Trump.

Neumann recently said publicly that in her DHS gig, she had witnessed the rise of right-wing extremism and white supremacy during the Trump era, and had tried to get Trump and his staff to take this threat more seriously. Trump’s reluctance to condemn such groups suggested he isn’t doing that."

In this case, according to the affidavit, the alleged plotters had first come together around the idea of creating a “self-sufficient” society. The group did various training and tactical exercises, and one was recorded talking about assembling an army of 200 people, taking hostages at the state capitol, Whitmer included, and then trying her for “treason.” He referred to her as a “tyrant b----."

It is not clear whether Trump’s rhetoric played any role in inciting this plot. But as journalist Heidi Przybyla pointed out in a Twitter thread laying out this spring’s timeline of events in Michigan, Trump did appear to time his public comments to incite already brewing right-wing unrest. He attacked local leaders such as Whitmer and urged rebellion against their efforts to protect their own people during a pandemic.

Shaw asked... "can you or anyone imagine if a group of Black men did this? Or a group of Middle Eastern Muslims?"

Whew... can I? Can't anybody? First of all, a group of armed black men would never get close to a capital building, let alone inside, in this country before they were shot. Same for Muslims. Or Mexicans or anyone else not white.

These guys are terrorists, pure and simple. Ship their butts off to GITMO and make 'em with 20 years for a trial. What they did is not tantamount to treason, it is treason. Sedition. Conservatives for years have said ppl arrested for terrorism have no right to a trial, now let's take them up on their offer.

You gotta wonder why folks normally pimping for headlines are so reticent to stand up and take a bow for ending the biggest terrorist threat in the US in years.

November will undoubtedly bring more right wing terrorist activity when and if trump loses. I'd bet on it.

RN: November will undoubtedly bring more right wing terrorist activity when and if trump loses. I'd bet on it.

Probably true. One has to think of it as being like the pain and danger that come with the surgery to remove a deadly cancer. That pain and danger are real, but there's no alternative. The cancer needs to be cut out whatever the cost.

Agreed Infidel. I enjoy a good heated discussion of the issues and understand that sometimes passions bubble over. That's true in politics as well as life. But what we're seeing with trump and his sycophants in the GOP goes way beyond what I'm talking about and so yes, the trump/GOP cancer needs to be excised.

RN, I doubt you are correct. Conservative have a history of moaning and going back to work when they lose. On the other side leftists have a history of protesting, whining for going on four years that they were cheated, disrespecting an elected president and rioting. Then of course they go into therapy to sooth their delicate emotions.

On the title of whitmer, I was under the impression they wanted to kidnap her not overthrow her. The leader has a history of hate toward trump so maybe he was a democrat.

skud: "RN, I doubt you are correct. Conservative have a history of moaning and going back to work when they lose. On the other side leftists have a history of protesting, whining for going on four years that they were cheated."

Good grief, you actually ignore the fact that trump's been bitching about the 2016 election for four years, AND HE ACTUALLY WON! Trump cultists can't see beyond the end of their noses what he is. That's for sure!

Your last remark about the criminal intent to kidnap and possibly assissinate Governor Whitmer is typical of a trump cultist who, instead of outright condemning the terriorist attempt, proceeds to try to pin the blame on anti-Trumpists. Your cynicism is nauseating, skud.

Adam Fox, a White Supremacist domestic terrorist helped plan the terrorist plot, and all you can do is find some way to make this an anti-trump plot.

Belive what you will skud. The facts do not support your arguably flawed premise and I for one will not waste my valuable time haggling with a person holding veiws and positions that are clearly inaccurate.

But carry on skud. I'm sure you'll truth some day.