TRUMP BY THE NUMBERS 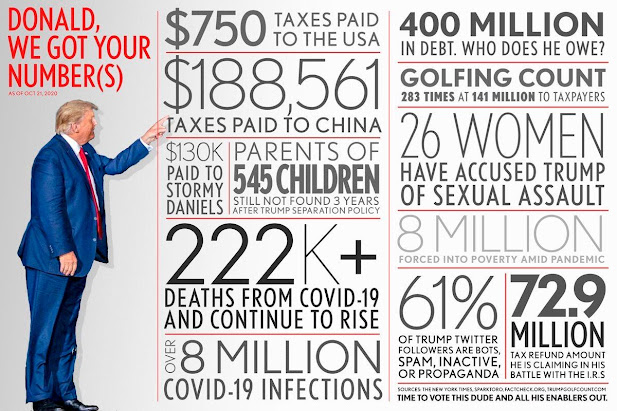 UPDATE:
Donald Trump's word is worthless. (SURPRISE!)
I remember growing up and learning that the most important part of a person's character is keeping one's word once given.
Trump, being a person of low character, broke an agreement he had with CBS over his 60 Minutes interview with Leslie Stahl and posted the interview today:
"In posting the interview, Trump and the White House violated an agreement with CBS News that the White House was taping the interview “for archival purposes only,” said a network source with knowledge of the interview."
We know that Trump is a liar, a cheat, and a fraud, and is bothered not at all with breaking his word, his agreements, his promises.
What good is a man --  or anyone -- who chronically lies breaks his promises:  The wall is not being paid for by Mexico; there is no plan to replace Obamacare; the 15 Covid-19 cases did NOT go down to nothing and disappear; we don't have the best economy in the world, the best employment numbers, the best Covid-19 numbers.
Donald Trump is not a man of his word. Liars and Cheaters and Frauds never are.
Kick his large posterior out of the White House on November 3!
Posted by Shaw Kenawe at 8:37 AM

It costs nearly $500,000 of taxpayers money every time Donald goes golfing. That’s more than his annual salary as president. How about having him keep his salary instead of donating it, and pay for his golfing himself!

It is difficult to grasp just how far this nation has fallen in 4 years. But when a nation elects an absolute moron to steer the ship of state I suppose it deserves whatever it wished upon itself.

I watched a real President yesterday, President Obama, and found myself feeling good for a breif period of time and almost hopeful that BIden would in fact win this thing. Then the darkness began to descend once again and that knot in the pit of my stomach returned as I AGAIN faced the real possiblity that Dotard donnie couls win the election in 13 days. I didn't sleep well last night.

RN What a nightmare! I've got to hang on to hope. And the belief that the majority of Americans want to get rid of the Trump nightmare!

JC, That seems excessive green fees for any course especially one you own. How many rounds does he play. What was the cost to take the pres to Hawaii for some golf because it would be a lot more fuel.

RN, you take this far to seriously because no matter who wins little will change for you other than a possible tax increase. That will be offset because you can have feel good moments because you won't have to listen to trump 24/7. I am really tired of him dominating the news and basement joe will follow his mentors ways of no press conferences with questions.

What's staggering is the depth and breadth of Trump's incompetence. Even after nearly ten months, Trump is stuck in the deer-in-the-headlights stage and appears to have no idea how to combat the pandemic or how to fix the economy.

If you compare infection and death rates in China and the US and then compare the number of businesses that have successfully returned to full productivity, you might be tempted to believe that Trump is secretly an agent of China. In addition to his blatant destruction of America's political standing, Trump, through his inaction and naive thinking, has driven the US economy to the edge, ready to slip into a inescapable downward spiral.

The irony, of course, is that Trump is unaware of what he is doing to the country because he's incapable of looking beyond the end of his narcissistic nose.

skud: "JC, That seems excessive green fees for any course especially one you own. How many rounds does he play. What was the cost to take the pres to Hawaii for some golf because it would be a lot more fuel."

That includes Secret Service coverage as well as everything else it costs to cover a president on a golfing weekend. Also, Trump has golfed 3x more than President Obama did at this point in their presidencies. You always have to erroneously throw in an Obama snark, even when it's a lie, eh?

You also continue to lie about a tax increase, since Biden has been very clear about who will get one. Now unless RN is making over $400,000 per year (and he very well may be because he's been successful all his life) he won't get a tax increase.

You still sound bitter, skud. Have you and your friends on the Mother Ship lost faith in the guy whose word is worthless? Trump had an agreement with CBS and broke it.

Well, not surprised. Trump is a LIAR, CHEAT, AND FRAUD. No person of good faith expects that sort of low character to be good at his word. In fact it's a good bet that that sort of low-life's word is absolutely worthless. Trump never disappoints in that.

Clearwater, it's clear to a majority of Americans and the world that Trump is basically an incompetent fool. And a loud mouth fool at that.

However, cultists never see past the cult leader's empty promises and noise, so there will always be a certain percentage of fools like him to stay loyal to the Cult Leader -- Trump.

So your resident Trumper has no problems with his leader calling for the arrest of his political rival by his toadying AG less than 2 weeks before our election? This skudrunner character has nothing to say about that? He doesn't remember that's exactly how the Soviet Union, Cuba, any commie leader took care of anyone challenging the guy in power? I can't believe there are Americans who have no trouble with that. Here in America! It's a sobering realization thaat so many Trumpers -- freakin Americans -- look at whaat Trump is asking for and they just shrug their shoulders or like this skud character bring up Obama golfing in Hawaii? Holy Shit!

The Obama/Biden administration will go down as the most corrupt ever.

A.A. It is sobering to know that there are millions of Americans who don't care, as you stated, that a US president behaves like an authoritarian/fascist who has been calling for the jailing of his former opponent, Hillary, and now his present opponent, Biden.

If this were a Democratic president doing this, people like skud and his pals on the Mother Ship would be screaming until blood came out of their eyeballs. Screaming about the Commie in the WH! But since it's a so-called Republican (sane Republicans disowned Trump) they're silent, and their silence shows the rest of us Americans that they're loyalty is to a cult leader, not America.

It's sickens me and millions of other Americans.

Duke Please list the indictments and felonies committed by the Obama-Biden administration.

You can't because there are none. Only mentally ill people keep repeating that stupid, baseless, factless nincompoopery that you posted here.

The most corrupt administration in modern American history is Trump's. That's a fact.

And you're certifiably crazy.

However, you ARE a Trumper, so that is self-evident.

You're right Skud. I do take things like honesty, decency, integrity, empathy, truth, etc. Very seriously. These are all things that trump places absolutely no value on and as a result he is the corrupt lying indecent as* that he is.

BTW, Biden wasn't my 1'st choice for the nomination but he's a damn site more honest, decent, empathetic, and has more integrity in hi pinky than the Orange Turd has in his entire morbidly obese carcass.

"RN, you take this far to seriously because no matter who wins little will change for you other than a possible tax increase"

You obviously still have a job, Skud. I don't, and I put the blame totally on trump and his mishandling of the pandemic. Also, my taxes did go up after the republicans rammed through their corporate tax relief a few years ago that specifically targeted blue states. So don't say that little will change...

The credulity of the Trump followers is phenomenal. They scream to lock Biden up
over fake Hunter Biden tales, while overlooking the their hero's rapsheet which
is longer than the Bible. Inconceivable..the Emperor Has No Clues.