I don't know why they had another debate.
It's not as if people are still undecided.
Who would still be undecided anyway?
That would be like having to decide between wanting to eat a sh*t sandwich for another four years,
or a plate of lobster mac and cheese!
Anyway, here's a cartoon that represents what last night's debate was like: 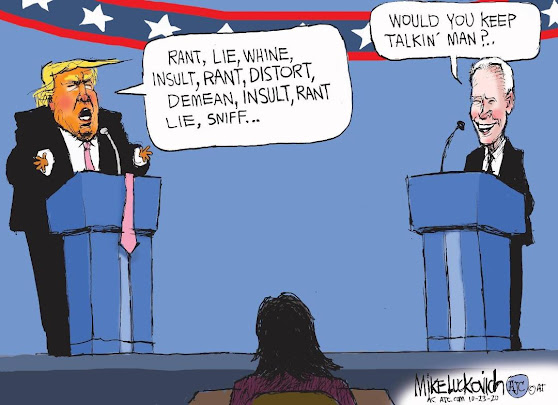 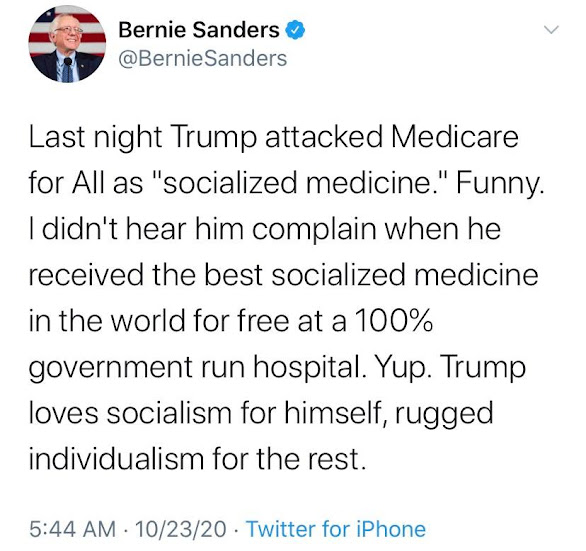 Trump is so dumb, he went after "socialized medicine" forgetting (or maybe he doesn't know this) that socialized medicine saved his worthless oversized posterior when he got the Covid!
Trump's not very bright.
*****************************
The part of last night's debate that morally separated the two men was when they spoke about the 500+ babies and children who were deliberately separated from their parents.
Biden was righteously angry and called it "criminal."
Trump answered with how clean their cages are.
Vote this monster and his horrid administration OUT in November!

Speaking of Trump’s lies, Trump has claimed almost 40 times since February that the coronavirus is disappearing. He said it again last night as cases surge across the country. On the most important problem facing the country, Trump still has no clue and no plan.

This election we do have a choice but not much of one. We have corrupt and corrupt lite.
As Americans we should be offered better candidates. Looks like jorgensen is the best choice.

trump looked like a deer in the headlights a few times. Probably because he was strugling to keep his lies straight. No clue, no plan, and no integrity. But he certainly deserves all the recognition he is due on those counts.

skud "This election we do have a choice but not much of one. We have corrupt and corrupt lite."

Joe Biden has not ever, ever been involved in corruption. Just because you can type those letters doesn't mean you know what you're talking about. You NEVER back up your silly accusations with evidence. You just make stuff up.

You, however, have NOTHING TO SHOW for your silly asinine false accusations about Joe Biden. Man up, skud. Show us your evidence or --- STAI ZITTO! -- as my Italian nonna would have said!

Here is a Trumpian example of what we sane Americans fervently hope to rid ourselves of soon. This came up at last night's debate:

"Fact check: Did Biden get $3.5 million from Russia?

Facts First: This is false.

Trump was seemingly trying to raise an allegation previously made against Joe Biden's son, Hunter Biden, but there's no connection to Joe Biden.

A partisan investigation conducted by Senate Republicans, whose report was released this month, alleged that Elena Baturina, a Russian businesswoman and the wife of late Moscow mayor Yuri Luzhkov, sent $3.5 million in 2014 to a firm called Rosemont Seneca Thornton, and that the payment was identified as a "consultancy agreement." The report did not provide any further details about the transaction.

Neither the Senate report nor Trump have provided any evidence that the payment was corrupt or that Hunter Biden committed any wrongdoing."

Trump and his minions are rotten lying liars.

Trump is essentially a stupid man who's gotten away with his gross stupidity, bullying, lying all his life and then he gets to be POTUS, and the whole world can see what a cipher he really is. He knows nothing about our government, our history, our values. And then you get people like your skud who compare Joe Biden, a decent, honorable guy and this skud tries to drag Joe down in the mud with Trump? I understand at my age how dishonest people can be, but to try to pretend Joe is like that idiot Trump really is the worst of dishonest comparisons.

Ms Shaw, At this point what difference does it make. Basement joe admitted sonny got money as a consultant which is not illegal. He knew squat about what he was consulting on but he got paid just the same. Was it because joey was VP, who knows and it will never be proven that either one of them did anything illegal.

You are just fine believing he is a saint I believe he is corrupt lite, not as corrupt as trump but corrupt just the same. The good thing is joey is all about family and his catholic upbringing.

Fed Up, Never said joey was as corrupt and that is the reason we have corrupt and corrupt lite. I don't think joey took money but did he use his influence to enrich his son, no question. Is that illegal, probably not, it is unethical, defiantly. Now before you come back with trump did this and that you are correct he is a crook and liar but this is about biden. No politician can be in office for almost 50 years and remain above board. Even GW had his moments but they were few. Once truman got to the WH he remained honest but his journey there was shady.
Face it, we have the best politicians money and power can buy and they are up for sale.

Don't forget that Dotard promised that everyone would get the same treatment he received -- for free. Re Skud's comment, Jorgensen has zero chance of winning, so how could she be "the best choice"? She is a Libertarian, so maybe she is the best choice for people who would otherwise vote for Dotard -- in that, by voting for her, they're helping Joe Biden.

You wonder what Pres Trump is thinking.

Why is any president going to Bullhead City, Arizona?

How does this help his campaign? How does this change the map? Bullhead City, where I spent tons of time as a kid, fishing, rafting, boating and camping, is an old white rural bastion of Trumpistas. All of them are already going to vote for Trump. He's not gonna add a single vote to his total by going there. How does he keep Arizona red by campaigning there?

He doesn't, but he will be there, on a stage, with an adoring crowd, no masks and they will love him.

This is the look of a campaign that has lost focus and as they have with the virus, has given up on any chance of appealing to voters outside his base.

Trump has a pathological need for affirmation and adoration. The only places to get that are deep red cities and states.

He's the president of the Red States of America.