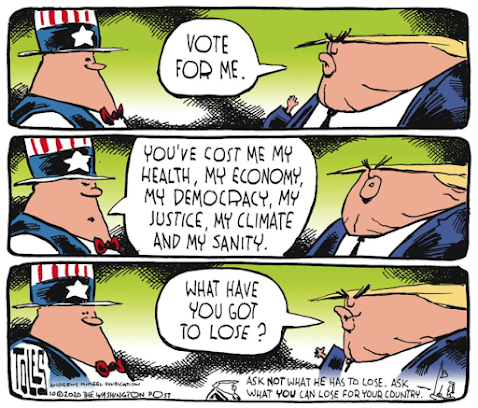 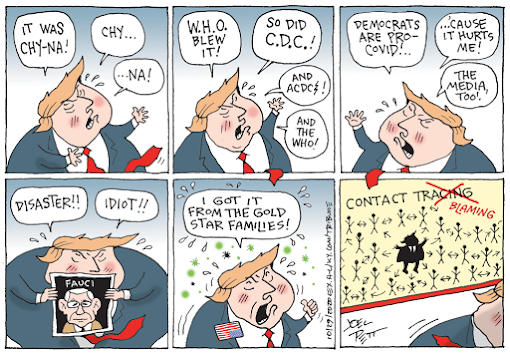 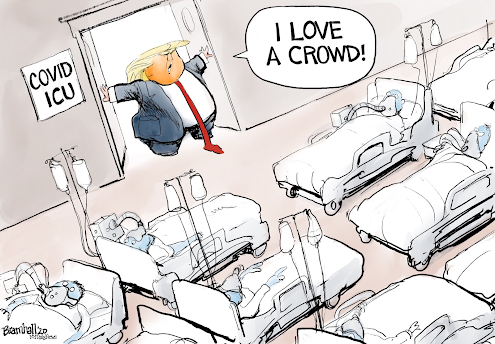 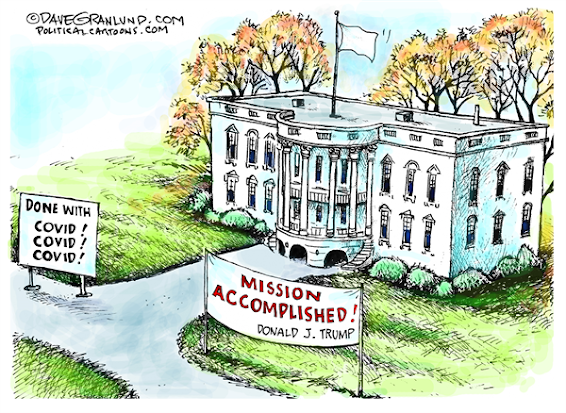 US will cross 100,000 daily Covid-19 infections "at some point" in next couple of weeks, former FDA head says 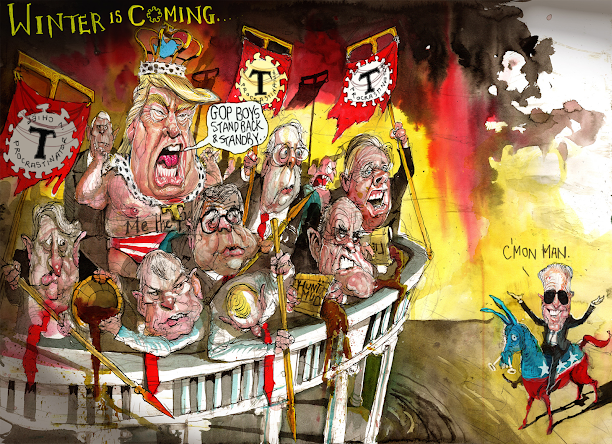 The Trumps don’t seem to understand that their supporters are dying from the coronavirus
"Since June, states that voted for Trump have been the center of new cases, with about 7 in 10 new cases emerging there. But it was only more recently that red counties began seeing the majority of cases (a function of the red state cases until then being centered in blue counties).
Since Sept. 5, most new cases in the nation have been in red counties. But it’s also the case that more deaths are occurring in places that voted for Trump. (In fact, the percentage of deaths occurring in red states has consistently been higher than the percentage of cases happening in those states.)
Looking at the seven-day averages of new deaths — meaning the average daily number of deaths in each county over the prior week — red counties just passed blue counties as the main driver of new deaths."
Posted by Shaw Kenawe at 9:32 AM

"Sanjay Gupta on CNN says they examined 17 locations where Trump held rallies and found that 82% of the time, the infections jumped in counties soon after a Trump campaign visit, and the rate of new cases in those counties grew faster than the rest of their states."

Seen in a local newspaper:

"For as long as I live, I'll make sure that not a single one of those who suppported Trump, actively or passively, gets elected or hired for any position of public responsibility , as long as I have antything to do with it.

Down to the post of an Associate Library Trustee.

It is not a revenge. It is a simple common-sense precaution. I consider Trumpkins no different from all other assorted nuts, like Moon-Fakers or 9/11 Truthers or Alien Abduction survivors. That's all."

And this is why sane Americans say the Trumpublicans are mentally deranged:

Idaho lieutenant gov. appears in video slamming virus rules, whether ‘a pandemic may or may not be occurring’

I read an Atlantic article "Why Many White Men Love Trump's Coronavirus Response" - clarified their mindset without being condescending.

My takeaway: Trump grants white men (and also women) permission to be assholes. That's why he is their Jesus.

On average, red-state populations have worse overall health, diets higher in meat and fat, more obesity, more diabetes. All those things make for worse outcomes if you get the virus. That they nevertheless largely refuse to take precautions against its spread is a product of being dumber and more ideology-driven. Now they're suffering the consequences of that -- that's all.


The only way Trump wins is by cheating. First he destroyed the Post office to delay mail, then he closed down polling stations, drop off boxes, then he tried to invalidate ballots that are postmarked before November 3rd. If you want this type of fixed elections, move to Russia.

Paula, I've been in touch with a friend who lives in Michigan. Trump also continued to spread this disgusting lie there:

"Our doctors get more money if someone dies from Covid. You know that, right? I mean, our doctors are very smart people."

Baseless conspiracy lie! What a relief it will be to get rid of this miserable lying cheat!

"Alarmed by the worsening pandemic and a president who mocks the virus at rallies, health agency scientists are challenging the administration’s approach in ways small and large.

The officials taking these stands have been emboldened by a worsening pandemic, an adrift White House and growing indications that Trump’s first term may be his last, say several administration officials who spoke on the condition of anonymity because they were not authorized to discuss these issues.

“We’re really fighting to get the right information out and to get people to understand what needs to be done,” said one senior health agency official who spoke on the condition of anonymity for fear of retaliation. “None of us at the agencies are wavering on that, I can assure you. We’re definitely at a place where we know what we want to do, we know how we’re going to do it, and we’re going to stick to it.”

Several administration officials described an unfocused White House, saying the coronavirus task force has fewer meetings, and Trump spends little time now thinking about how to handle the virus — instead mocking it at political rallies. Many of the administration’s top doctors, including Birx, Anthony S. Fauci, director of the National Institute of Allergy and Infectious Diseases, and Surgeon General Jerome M. Adams, are beside themselves over the growing influence of presidential adviser Scott Atlas, a neuroradiologist with no infectious-disease experience whose disputed views about herd immunity have gained currency with Trump, the officials said.

During the worse pandemic to hit the US in over 100 years the POTUS is lying at his rallies about the medical people who are saving lives. Even worse, Trump's holding super-spreader rallies, exposing his own supporters to possible death or debilitating life-long health problems post-virus.

Some leader, eh? Trump is the ultimate virus. Get rid of it on Tuesday!!!

Trump is the ultimate virus.

The PERFECT description. The only addition that can be added is that the ultmate virus is deadly, in more ways. The trump ultimate virus is destroying our democratic republic as well.