NOTHING WILL BE DONE 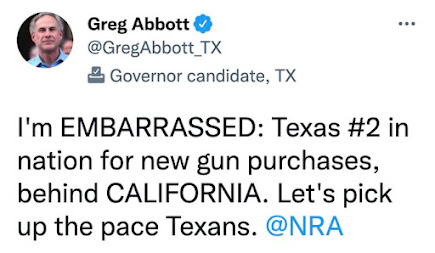 Trumpublicans are afraid of CRT in schools but not AR-15s or any other kind of weapon of mass murder.

Kyle Griffin
@kylegriffin1
·
45m
NBC News: Senator Murphy spoke to reporters as he walked off the Senate floor, saying, "spare me the bullshit about mental illness. We don't have any more mental illness than any other country in the world."
Posted by Shaw Kenawe at 6:34 PM

Obviously our founders intended no
such thing. But of course that was LONG before the American NRA established the conservative's official gun and death culture of America. It accomplised its mission. More guns on the strees and more death.

Angry doesn't begin to cover what I'm feeling after yet another of these mass murders. I blame each and every single fool who voted for a legislator who makes excuses for the gun fetishists. I blame each and every moron who tries to use semantics in lieu of actual debate. Their self-satisfied smirks barely contain their glee while the tiny bodies of children cool in bags and love ones ache to hold their babies one more time.
This is not a game, people. If your misinterpretation of the second amendment has so warped your brain that innocent people, including little children being decimated by gunfire doesn't bring you to demand action, then clearly you are the enemy of those of us who are heart sick with seeing this so very often. The right is so in bed with the gun industry that they turn their backs on huge swaths of Americans. They pass bills to protect the gun manufacturers from being sued, they make it easier and easier to get and carry guns in stores, churches, parks and anywhere else you might encounter a rabid butterfly or that you'd need to suddenly play-act an out of shape OK Corral scene. It's a sickness and we need to address it as a nation. The rest of the world scratches it's head and wonders at what the Hell is wrong with America. I had a friend from Germany visit last week. He was here when the supermarket in Buffalo was the scene of a racist mass murder of 10 by a right wing white supremist. I asked him how often they have similar things happen in Germany and he said about every ten to fifteen years they have a mass casualty attack. And before some pinhead starts in with "We're a much more diverse . . ." line of bullshit. Germany has, in the past thirty or so years, become a major melting pot with people from all over the world. Different religions, customs, languages and, yes, bigotries. Yet somehow (must be magic) they don't have their people running around blowing each other away with a glut of high powered weaponry easily available and, if you'd like, without any background check at all. Let's face it; a LOT of our fellow Americans are MORONS and don't mind seeing babies blown away by gunfire. Sure, they scream about saving them before they are born boy, boy howdy, once they're here, let the shooting begin.
Do I expect anything to change? No. I've given up on hoping for sanity. Instead the left will mildly squeak about common sense gun control and the morons and the maggots on the right will clutch their pearls and shriek about 'gun grabbers' and 'they want to do away with all our guns' until the left quietly backs down and we wait for the next little kid to get blown away while just trying to learn their ABC'S.

The NRA convention is this weekend with Trump and the Texas Governor speaking. Lets hear what they have to say.

Herschel Walker’s response to whether there should be new gun laws in light of todays shooting:

“What I like to do is see it, and everything, and stuff.”

The Trumpublican Party wants voters to vote for this guy to be a U.S. Senator. He's enthusiastically backed by Trump.

When I wonder if the GQP can sink any lower, I read something like this and think, "Not yet."

I agree with your comment. What else can we say about this madness. And it IS a madness.

Not mental health; not bad parenting; not any of the weak excuses the NRA's lackeys in Congress give.

School shootings are not fucking acts of nature, like hurricanes and tornadoes. They're man-made acts of inaction, of cowardice, of corruption by all lawmakers who refuse to pass laws PROVEN BY DATA to stop preventable, senseless shootings like in Uvalde.