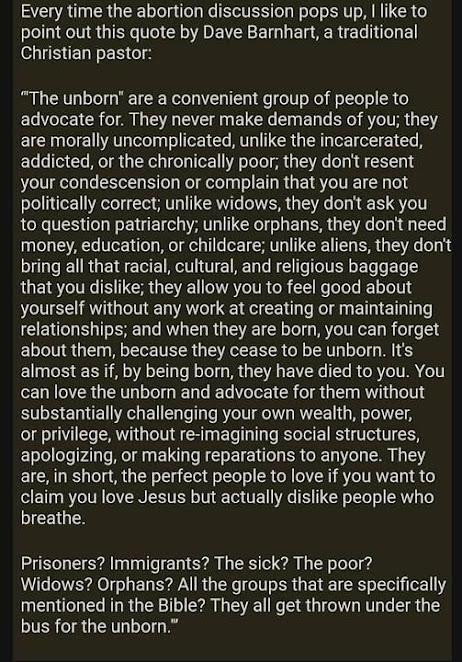 Use your preferred Internet search engine to see all the myriad Christian charities that provide assistance to prisoners, the poor, children, and the elderly, including those in other nations.

You can use your preferred internet search engine to see how many thousands and thousands of CHILDREN -- that's right CHILDREN! were abused, molested, and raped by the priests and ministers of Catholic/Christian Churches.

You can use your preferred internet search engine to see how many thousands and thousands of aborigine/First Nation CHILDREN -- that's right CHILDREN! who were taken from their homes and forced to stop speaking their own language and who were Christianized and Anglicized without their parents' permission.

History is replete with instances of conservative religions torturing, burning and hanging people they charged with being heretics.

The Catholic Church, which does not recognize divorce, allowed Newt Gingrich and his current wife, Calista, to be married in with the Holy Sacrament of Marriage even though they both were adulterers for six years while Gingrich's was still married to his 2nd wife.

In the Catholic Church, you can get an annulment for your marriage if you have the money to do so, or are a famous politician. Meanwhile, a priest once disallowed a mother to bury her child in a Catholic cemetery because her child suffered depression and killed himself. No Catholic burial for him, but Newt Gingrich who committed adultery with his two wives and married the third one, got a dispensation from the Church. If you've got enough money you can buy your indulgences from the RCC and even get the woman you committed adultery with appointed Ambassador to the Vatican!

"Newt and Callista married in 2000, after having a six-year affair while Newt was married to his previous wife. Newt converted to Catholicism in 2009 and explained, in an interview that year with Deal Hudson at InsideCatholic.com, how Callista's witness as a Catholic brought him towards the faith."

Maybe now you can understand why many many people believe the RCC has no moral authority. It's just a large, corrupt, wealthy organization.

Whoa! That was quite the diversion, little lady! People have been abusing institutions and its robes for as long as there have been institutions and sadly, that includes Christian ones, and Jewish ones, and Buddhist ones, and Hindu ones, Moslims, etc. Even the noble profession of teaching has produced horror stories of child and adolescent sexual molestation.

Nonetheless and notwithstanding, I reiterate my original claim that the pastor's sermon you cite is tommyrot! I direct your attention to my original comment. Good religious people give of their time, treasure and talents to help their fellow men and women, most of the beneficiaries being strangers to the benefactors.

I cannot speak for the catholic church. Perhaps you should write to the pope and engage him in debate.

This is not a constitutional issue since abortion is not mentioned in the constitution so why is the SCOTUS involved in the decision. This issue will be punted to the states and if you don't like the decision your state makes, move or vote them out. For a group who preached that the constitution is a living document they now believe it should be frozen.

This discussion does divert attention to the state of the biden failures of which there are many. For the sake of the senior population I wish he had one successful decision but he seems to be just compiling failures. Inflation is the cruelest form of a tax increase because it affects everyone but he is attaining his goal of raising taxes.

Yes, it is about "the Evil that men do..." And the RCC KNEW that their priests were molesting and raping children and instead of taking those priests out of their parishes, they reassigned them to other diocese where those priest had access to more victims. That's EVIL.

I like to repeat what Nobel Laureate in Physics, Stephen Weiner once said:

This is a true statement. History is replete with examples of this.

We have a Supreme Court that’s imposing the religious beliefs of one segment of the country on everybody else. Which is deeply, damn unconstitutional.

HH: "Good religious people give of their time, treasure and talents to help their fellow men and women, most of the beneficiaries being strangers to the benefactors."

Religious people with deeply held religious beliefs hanged women as witches; flew planes into buildings, stoned women to death for adultery (but not the men); molested and raped children, wiped out entire populations because they weren't baptised in the name of Jesus (see the Conquistadores in the New World -- the Incas). And what about the Inquisition? And good Christian Baptists in the south tortured and murdered Christian Americans with a different color skin with impunity. Their pastors never preached to those good southern Christian Baptists that it was wrong to kill fellow Christian Americans.

Yeah. Some religions do some good. But history shows that their many crimes against humanity negate the good deeds.

These good religious people who are saving the unborn use tactics like murdering abortion doctors, bombing abortion clinics, and harassing women who sought abortions. All at a time when abortions were legal. These are the people who call themselves good Christians.

You keep throwing those diversions in there. Everything you have stated does not negate the facts I have provided.

It is your OPINION that the evil some have done negates all the good done today.

The fact that you make that assertion means you have accepted what I said about religious people today doing good. But, its your blog, so you're always right of course.

Spirituality, which is NOT necessarily synonymous with religion, can actually be a very positive energy for good.

Spirituality may or may not recognize the existence of a supposed "supreme creator". A concept which in and of itself insures authoritarianism will remain present unless this man made belief system is eradicated from the human belief systems.

Hootie Harpootlian said...
"You keep throwing those diversions in there..."

Those are not "diversions;" they're facts.

Or are you suggesting the pedophile scandals in the RCC and other Christian churches are not true? That the beheading of women in the Muslim religion for not wearing a burka or getting raped or some other offense is not true? Or in our own past in the U.S., Christian pastors and priests not speaking out about Christian Americans with dark skin being tortured and murdered because of nothing more than wanting to exercise their American rights? Those aren't small indiscretions -- they're crimes against humanity.

Sure some religious organizations do some good (I'm trying to think of the good that, for example, the Scientologists do. That's a "religious" organization that "was given tax exemption by the IRS. Thousands of suckers are scammed out of their money in order to join that "religion," -- the only "religion" that one has to pay to join, BTW -- and I can't come up with anything they do that benefits anyone except the people who scam their gullible adherents. I lived in Clearwater, Florida, for a number of years and had close encounters with those weirdos. But I digress.)

Okay, I'll grant you that some good is done by some religions; but look at the price humanity has had to pay for that!

PS Hootie -- yes, it is my blog; and these are my opinions. You'll find that true on just about any blog you visit. Surprise!

My favorite Bible story is the one where pro-life god kills the first born son of every Egyptian family instead of just ending slavery.

Skud lamely posted... "This is not a constitutional issue since abortion is not mentioned in the constitution so why is the SCOTUS involved in the decision."

However, there are inferred rights, not enumerated, a tradition long accepted by the SCOTUS.

Ninth Amendment
The enumeration in the Constitution, of certain rights, shall not be construed to deny or disparage others retained by the people.

The Ninth Amendment was James Madison’s attempt to ensure that the Bill of Rights was not seen as granting to the people of the United States only the specific rights it addressed.

In recent years, it has been interpreted as affirming the existence of such “unenumerated” rights outside those expressly protected by the Bill of Rights, for example, the right to privacy.