Trumpublicans like to bray about "Liberal Grooming," --,  Liberals grooming children to turn gay (LOL!), and to feel ashamed of America's actual history? (LOL!)

But the Trumpublicans have been grooming their children for decades. Here is documented Trumpublican grooming. It encourages young people to worship firearms of mass destruction and, for some, to commit massacres.

This is what they worship: 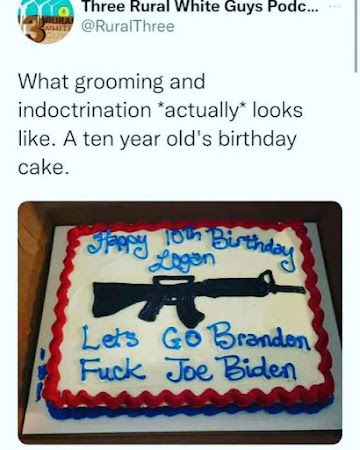 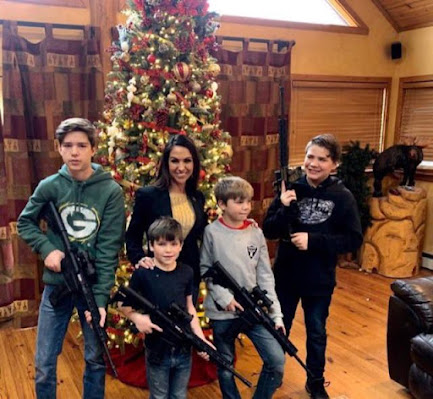 Because nothing celebrates the birthday of the Prince of Peace like automatic weapons used in massacres of innocent men, women, children, and babies! 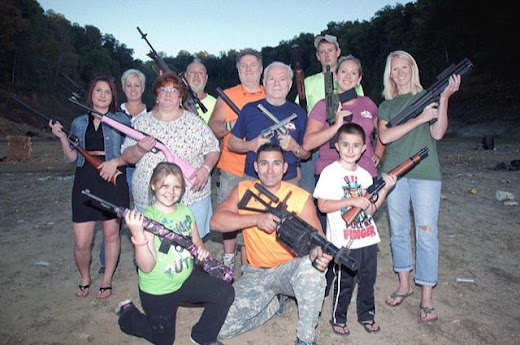 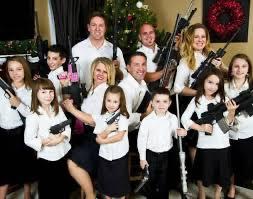 "Suffer the little children to come unto me, and show me their weapons for killing other human beings!" 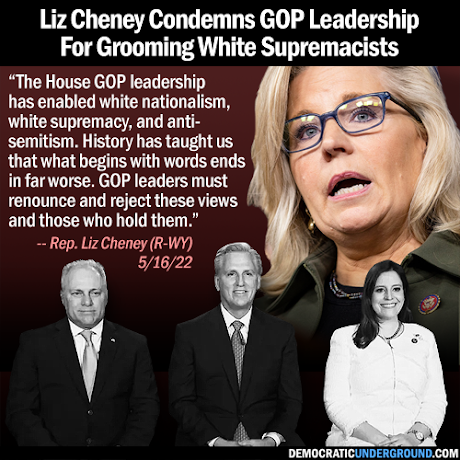 “I spent a decade working in counterterrorism. The rhetoric we are seeing from leaders of my party — the Republican Party — is directly fueling violence and a spike in domestic terrorism. This is not a partisan observation. This is a public safety warning.”
— Former Department of Homeland Security Chief of Staff Miles Taylor, on Twitter.

"This is not a partisan observation. This is a public safety warning.”
And it's falling on the deaf ears of the right.

We have a raging fire of hate taking place in the United States, and Fox News and the Republican Party add gasoline daily.

The Democrats had better learn from Liz Cheney and demand the GOP condemn the white nationalism infecting the party, or at least remind the public every day that the Republicans ARE the party of White Nationalism.

The fascists have no qualms about falsely accusing dems of being commies. The Dems better get their messaging out, or they WILL be defined by fascists as communists.

We've seen this movie before. Hitler, and all his fellow travelers since, have always operated from that dirty demonization playbook.

The dems blame the repubs and visa versa but the truth is politicians make EVERYTHING political to the determent of the American people. The repubs have greene which would be the ultimate except the dems have pelosi. There is enough gross incompetence to eliminate all but a few on either side. You get what you deserve and we deserve these idiots because someone voted for them. Come the new year with a change in congress and impeach biden will be all the rage and the circle will be unbroken.

If Liz Cheney were to run for president she would receive my vote. Not because I agree with even the majority of her views, because she may be among the few who, as president, might have success reigning in the rogue tRumpublicans.

Yeah, I know it's a moon shot, but short of something like that it's likely the rot and stench continues ad infinitum.

To compare MTG.to Speaker Pelosi skud is like comparing a benevolent deity to Lucifer. MTG being Lucifer as I"m sure you're well aware.

Before the GOP became radicalized by the repulsively narcissistic Trump, the party would have been begging Liz Cheney to run for the presidency. But the GOP doesn't exist anymore. It's the Trumpublican Party, and they stand for nothing except worshipping a Liar, a Cheat, and a Fraud.

skudrunner, to mention Speaker Pelosi's name with M.T.Greene's is blasphemy.

"Speaker Pelosi is considered one of America's greatest Speakers of the House. You may not like her, but that doesn't take away any of her remarkable accomplishments. She is now, without doubt, the most effective -- and powerful speaker in the last seven decades.

That is not, in any way, a partisan statement. It is purely a reflection of Pelosi's ability to shepherd major pieces of Democratic presidents' agenda through a closely divided House, with a knowledge of her caucus -- and the buttons that need to be pushed at the exact right time -- that no one who has come before her in the job has been able to match."


M.T. Greene is barely literate and is a supporter of the J6 insurrection where her people wanted to kill the vice president of the United States as well as Speaker Pelosi.

M.T. Greene has voted against almost every single bill passed by the House to counter Russia's invasion of Ukraine, (she obviously supports the work of Putin's crimes against humanity); and she's managed to get her face anywhere near a camera to eagerly make a monumental fool of herself when she does.

It is really nauseating to think anyone could find anything remotely similar between the two women.

Ms. Shaw, Your opinion of pelosi is quite different than mine. I see her as a vicious hypocrite who is all about being one of the elites and nothing about serving the country. From her passing on confidential financial information to her husband so he can make correct investments to going to a beauty parlor during lock down she has shown she is far above the rest of us mortals.

Greene is a deranged individual who seems to be confused with life.

skudrunner, got any evidence to back up your accusations?

That Beauty parlor incident is all you got? I'm not impressed.

Speaker Pelosi is certainly a vast improvement over a past GOP Speaker of the House. Remember Dennis Hastert.

And please, let's not hear any lectures about politicians being above "us mortals," when the GOP wants a twice impeached Trump who's being criminally investigated, and who illegally took classified WH docs to Mar-a-Largo and kept them there until officials got them back.

You, as a Conservative/Republican, shouldn't be casting stones at anyone on the Democratic side of the aisle when Trump is traveling around the country like a Royal-in-Waiting, hoping to re-install himself and his crime family back in the WH.

PS: When Trump was POTUS and he had the Judiciary, House, and Senate in his greasy little hands, no committee was formed to investigate Speaker Pelosi. Why is that?

Ms. Shaw, I do take into consideration your position on what makes a good leader. You support someone who did nothing for middle class but didn't have anyone in his administration thrown in jail. I'll take someone who serves all of it's citizens. As to me being a republican conservative you are partially. I am an independent fiscal conservative and feel both parties spend way to much because it is not their money but will buy votes.

Why is it The Madam didn't support AOC idea of spouses of representatives be banned from trading the market. Her claim, founded, was they had information before the public and it was inappropriate. The Madam's husband has made millions using information provided to him by his spouse. Some would say that is insider trading but she is untouchable.

You need to keep up on current affairs.

"After months of resistance, House Speaker Nancy Pelosi has greenlighted a plan to ban members of Congress from trading stock, CNBC confirmed Wednesday.

At Pelosi’s direction, a House committee is drafting the rules, and the legislation is expected to be put up for a vote this year.

Several versions of a stock trading ban are also under consideration in the Senate, including one co-authored by progressive Democratic Sen. Elizabeth Warren of Massachusetts and Montana Republican Sen. Steve Daines."

Also, here's a long list (60) of Congresscritters, Dems and Repubs, who were late in reporting their trades as part of the federal Stock Act.

Nancy Pelosi's name is NOT on that list. Apparently, unlike a number of her colleagues, she follows the law.

You can at least give credit where credit is due.

Speaker Pelosi has never generated much excitement for me either skud. A tad too progressesive for my liking. But she is effective (one of the most effective) and she is eons more honest w/more integrity than almost EVERYONE in the now tRumpublican party. Liz Cheney is one exception. But then again she is nota tRumpublican. She is what republicans were at one tine in our history. Those days are likely gone for good. Thanks to tRump and his galloping headless cultists.

Good ol' Skud. He's the kind of guy who responds to outrage and condemnation of white nationalism, and Trump's Big Lie that fueled a coup with, "But Hillary's emails", and "But Pelosi is just as corrupt".

And for some reason when Republican white nationalism and domestic terrorism is discussed, he avoids the terms entirely.

Instead, "But democrats are just as bad!"

Head in the sand, or purposeful deflection from evil?

Oh no, an asteroid is headed towards Earth, spread the news! Skidmark - "Oh hey, did you hear about some Democrat wearing white after Labor Day?"
Yeah, he's daft but at least he's predictable as all get out.