He's a killer AND a liar!

The Trumpublicans made this little punk killer a hero.

Their little "hero" is also a liar. 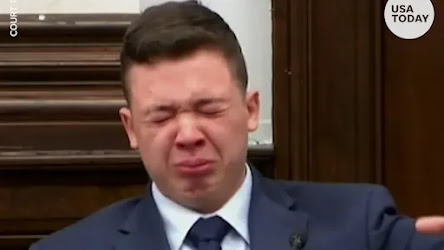 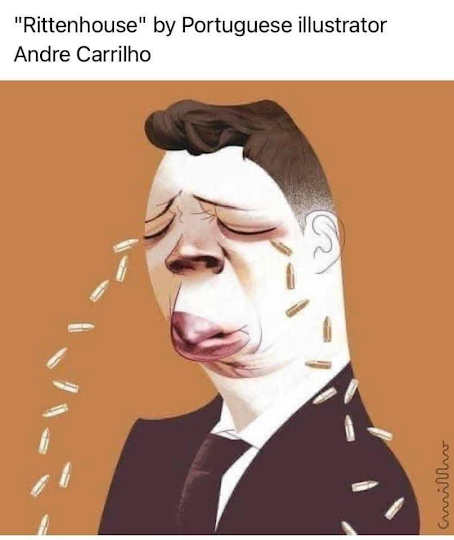 "Kyle Rittenhouse said on "The Charlie Kirk Show" that he would be attending Texas A&M.
A spokesperson told The Dallas Morning News he hadn't been admitted for the summer or fall semesters.
Rittenhouse killed two people at a protest in Kenosha, Wisconsin, in 2020. Kyle Rittenhouse said he would be attending Texas A&M University during an episode of "The Charlie Kirk Show" podcast posted on YouTube Saturday.
"I'm going to be going there, and it's going to be awesome," Rittenhouse said after donning a baseball cap with the university's insignia on it. "Beautiful campus, amazing people, amazing food."
Young Democrat, Amanda Gorman vs Young Trumpublican, Rittenhouse.
(Gorman graduated from Harvard University).
Rittenhouse, who killed two people and permanently maimed one person after he crossed state lines to shoot up people, is a role model for the Trumpublicans and their children.
Never forget who they admire -- it wasn't a big jump from worshipping a twice-impeached president who incited an insurrection against his own government and supported "HANG PENCE!"  to Kyle Rittenhouse. 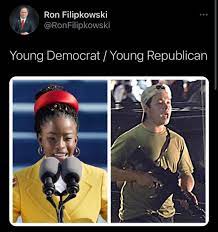 Rittenhouse also said he'd be attending Arizona State this fall. That too was a lie.

What is it with conservatives that their current heroes, Rittenhouse, Carlson, Trump and more, are such easily provable huge liars.

And they don't care.

Rittenhouse and his mother should both be in prison.

Those admiring Rittenhouse, Carlson, tRump, and the rest are simply very insecure and frightened whittle people.

If he goes to Texas, can he carry a gun on campus? I doubt and I hope his fellow students won't be hero worshiping him.

Slightly off topic but definitely related... AS the Dalai Lama has commented, the future belongs to women

It would be a good thing as the "muscle and might" mentality of males has screwed things up so bad it's going to take a huge sea change to right what male jackasses have managed to create.

I'm with the Dalai Lama all the way.

While somewhat important, Rittenhouse is a sideshow. A distraction. He makes no policy, sways no one and as you pointed out, is a liar, a killer and another GOP "Celeb" in the mold of Lauren Boebert, MTG and Matt Gaetz. Utterly unserious, undereducated and not worthy of much of our time.

In fact, if the GOP had not left the legacy of leaders like Reagan, Kemp, Goldwater and McCain, we'd know nothing of these clowns.

Even the issue of guns, gun control and gun regulation, while vitally important, distracts us from the issues coming due this week.

Seditious conspiracy to disrupt a legal, lawful, Constitutionally mandated function of the United States Congress. By the Proud Boys, their crew, many elected GOP members of Congress and of course, a sitting US President.

These next few weeks could well be the most important weeks our country has faced in years. Will any top level Republicans break with their party and stand for the rule of law they have always championed?

Will what the Dems are going to represent even move the needle?

Will the United States prevail against petty, party politics?

Dave M. "These next few weeks could well be the most important weeks our country has faced in years."


And FAUX NOOZ will not carry any of it. The most popular anti-American cable news show will not carry anything about the worst attack on the US Capitol since the War of 1812, because they don't care about what an ex-president who dealt in treasonous acts to hang onto power did to this country.

Read the newest revelations coming out of Georgia!

BTW, I put this up about Rittenhouse to show, again, the sort of hero worship the Trumpublicans indulge in: A kid who crossed state lines with an AR-15 and killed two people and permanently maimed one.

This is the sort of punk the current Trumpublican Party holds up as an example of the promising American youth! A kid who killed -- and also, as we have found out, lies!

Compare that with the young graduate of Harvard University, Amanda Gorman, a young American admired by not just Democrats, but Americans who believe in goodness, achievement, and decency.

Only in America -- in places like Texas -- can a kid walk into a gun store and purchase an AR-15, no questions asked, no permit required.

That, IMO, is the very definition of insanity.

I'm so thankful I live in Massachusetts.

In a sane country, that would be true!

Time will tell... If I were a bettor I'd play it safe.

Dave M. "These next few weeks could well be the most important weeks our country has faced in years."

It will probably take a few months for the economy to go into full blown recession so I think you are a little short on your estimate.

Did you happen to listen to or watch McConaughey's speech about gun control. He had more good advise and sensible plan then any of our elected elite. Both sides need to put forth a reasonable plan to achieve any action and we do need a reasonable plan for gun ownership. We elected these people to represent all Americans and not just the half that belong to their party.

Maybe after they come up with a gun ownership policy the can work on comprehensive immigration reform or is that to much to ask.

Skud... as for what McConaughey had to say, I dare say most Dems would be ecstatic with most of what he shared and have even proposed some of his ideas himself.

The Dems have put forth a series of ideas that the great majority of all Americans agree on. The GOP response?

The cynism felt by old time responsible conservatives/republicans is overwhelming. The Bush II era going forward was the end of the GOP as it once was. It is likely decades will pass before the old reified fossils of the party are gone completely. Forever. Unfortunately they may have spawed duplicates of themselves.

Ar any rate good luck until then.

Rev, What reasonable ideas have the dems put forth. The our way or the highway is the reason congress cannot get anything done. We deserve better from both sides and for once in the last 14 years it would be nice for our elected elite to work for the country instead of their own party.

While there may be a smidgen of truth to your both sides do it mantra skud I call bullshit on most of it. The TRUTH is since 2008 when President Obama was first elected the now republican party has been NOTHING but obstructionists preventing most of what dems propose from seeing the light of day. WITHOUT offering any substantial ideas or proposals of their own.

Truth never is covered over forever skud. And sooner or later, and hopefully sooner, the lying incompetent republican party.will pay the huge price it so richly deserves.