According to Liz Cheney, Trump expressed sentiment that Mike Pence ‘deserved’ to be hanged
The opening hearing of the January 6 Committee was riveting, especially Rep. Liz Cheney and the way she laid out the case against Trump.
Her message was clear: TRUMP DID THIS.
I was worried there would not be enough emphasis on his guilt.
The committee needs to pound that home over and over.
Now I understand why FAUX would not air this damning evidence. 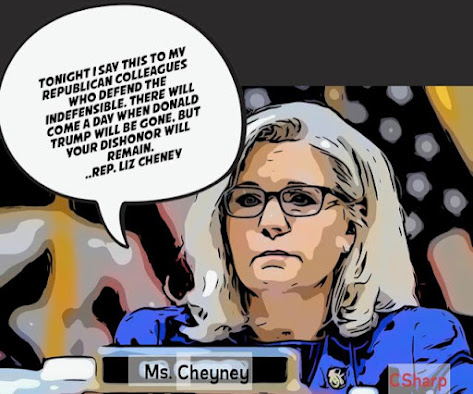 Glenn Kirschner
@glennkirschner2
·
9h
The anger I feel at Trump intentionally endangering the lives of EVERYONE at the Capitol on 1/6, and then placing no calls, giving no orders to send forces to defend the Capitol, with Pence having to give those orders . . . there are no words. Other than TREASON!
Robert Lusetich
@RobertLusetich
·
9h
Replying to
@BeschlossDC
That was an indictment of Trump, whose hunger for power & inability to accept he'd lost was his only guiding light. Maybe not a criminal indictment, but if GOP embraces him in 2024, it is hard to see a way forward for them. Ivanka saying the election wasn't stolen will kill him.
Posted by Shaw Kenawe at 6:58 AM

The hearings were riveting. Truly this is history in the making. I watched every minute and dvd'd them to watch again later today. I happened to catch a little bit of Washington Journal this morning and, unbelievably, Republiclowns are STILL trying to minimize or even flat out excuse Trump's actions by spewing out every absurd thing you can think of. Two of them were blaming Pelosi for not protecting the Capital better! Truly, the stupid is strong with those people.

There is a saying that one cannot convince a human of an idea when their paycheck depends on them not getting it. Stupid doesn't cover all - but avarice and greed certainly do.

I too watched the hearing and then found it on the YouTubes and watched it again to catch what I might have missed.

I cried. I didn't yell because that would have upset the dog, but yeah, I cried at the end of the short video where the Trump flag and the Christian Nationalist flag were raised over the battle field that was our Capitol. I cried as I watched Officer Edwards retell her story, I cried at her thousand yard stare for I know the emotions she had to hold back. As a fellow PTSD sufferer I know what she was feeling and yeah, I sobbed. So glad I have a service dog because some burdens are just too heavy to carry alone.

I've been to the Capitol building in Washington DC; went on many a school trip to look at the paintings and statues. To know how these cretins desecrated what I consider to be a holy space just... well, I already said, I cried.

My hope is that this evidence banks the fires in those we need to vote in the midterms. I hope their anger smolders deep inside, waiting, just waiting until the elections happen. I hope there is an overwhelming nonviolent response to this rape of our country. I hope every GQP candidate loses their bid for power. I hope We The People vote Blue no matter who, even if only for this one very necessary election. I know we can do this... but still, I hope.

The alternative to voting is I get my roof mounted grenade launcher, so there is that. Always looking for a bright side.

If tRUMP manages to get out of this he will take the title of Teflon Don away from John Gotti.

The political AND moral courage of Liz Cheney was a shining beacon of light and TRUTH from a true conservative of character. Unfortunately the party to which she belongs has morphed into nothing but an oozing pool of putrid pus.

More on this later. I’ll comment on your comments. I’m in the country milking goats.

He may get that title with gold embroidery here. But the orange scum will not excape his karmic realities. They will eventually exact the just price for his actions.

Rep. Cheney was magnificent. While I doubt I'd agree with her politically, Rep. Thompson was 100% correct when he stated that she is a true patriot. I'm very impressed with her dignity, intelligence and demeaner. She laid out the case without hysterics or grandeur and made it easily understood and very relatable. It's a shame her father is Satan. This lady deserves much better.

FOX(R) OAN and NewsMax are active participants in the coverup, assault on our rule of law, and war on our democracy.

They are America's voice of ignorance, tyranny, chaos and fascism.

We can be thankful to have the 1/6 committee putting all of this in the public and congressional record. The fascists will find it vary difficult to erase history and avoid its judgment.