The Texas GOP just formally declared that homosexuality is an "abnormal lifestyle choice" and Biden's victory in 2020 was "illegitimate."
Of course, they're wrong. In the face of overwhelming evidence, the Texas GOP is joining with Donald Trump and his mob that falsely believes he won the 2020 election.
The Texas GOP blocked the Texas Log Cabin Republicans from attending the Texas GOP convention.
Other red states will adopt this egregiously anti-human, anti-reality nonsense.
It's a GQP sickness that is spreading like a deadly virus. Or,  as I have commented elsewhere, a slow moving neo-fascist takeover of what was once a democratic republic, once admired by the rest of the world.
“We reject the certified results of the 2020 presidential election, and we hold that acting President Joseph Robinette Biden Jr. was not legitimately elected by the people of the United States,” the Texas party said in a resolution, passed in a voice vote at its convention.
One of two Republican members of the House committee investigating the attack on the U.S. Capitol on Jan. 6, 2021, starkly warned Sunday that his own party’s lies could feed additional violence.
“There is violence in the future, I’m going to tell you,” said Rep. Adam Kinzinger (R-Ill.), on ABC’s “This Week.” “And until we get a grip on telling people the truth, we can’t expect any differently.” Kinzinger, who defied party leadership by serving on the Democratic-led committee, described an alarming message he received at home in the mail several days ago threatening to execute him, his wife and their 5-month-old baby.
“I’d never seen or had anything like that. It was sent from the local area,” he said. 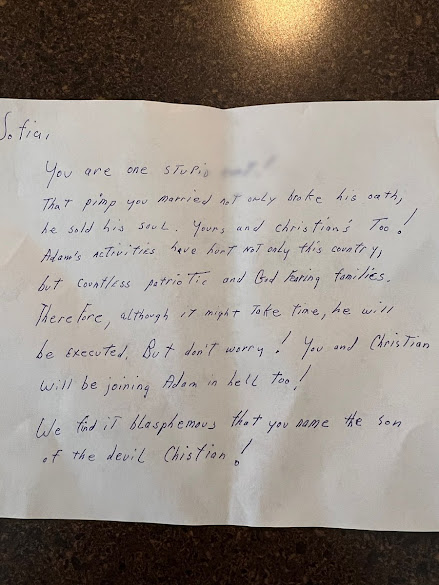 This Trump cultist from South Carolina is running for public office. He says the parents of LGBTQ children should be killed. And he want to bring back the HUAC so that people can be put to death for treason. Here is the video where he says all that:
Trump did this.
May his miserable name live in infamy for eternity.
Posted by Shaw Kenawe at 9:09 AM

Trump is out of office but we'll suffer the poisonous consequences of his time in politics for a long time to come. He spent that time lying about this country, its important institutions, history, founding values and recent events -- and most important, falsely vilifying and encouraging hatred of the majority of Americans in the ugliest possible terms. In order to encourage disunity and the denial of representation to the nation's true voting majority. That poison has and will make it next to impossible to deal pragmatically and effectively with the problems you cite. Just as he made it impossible for government to deal with the problems that were his responsibility while in office.

Trump's ambition is/was to enjoy the status, and opportunity for personal profit, of holding office. Not solving problems. Realizing that doesn't mean you hate him. It means you're honest and non-partisan enough to look at what he's done and how he operates. The few things -- the usual tax cuts and deregulation, and expanding the corporatist Federalists on the Court -- his administration did for the GOP's voters owe NOTHING to his own efforts. They were things any Republican would do; legislated by the same conservative establishment, "deep state" players he dishonestly claimed to challenge. They primarily benefit the party's most affluent voters and major donors -- the corporate class and ultra conservative heirs of the nation's established and wealthiest families (who give 80% of their political money to the GOP).

Trump let donors help themselves to what they wanted. While he spent his time spewing political poison and encouraging the most politically alienated, hate filled, violent -- and heavily armed -- members of the public to serve him and his political purposes (staying in office and fleecing the public). That threat to the nation and lives and rights of the rest of us will be with us for a long time to come.

Here's another take, from Texas of the recent GOP gathering.

Showing the Texas GOP calling Rep Dan Crenshaw "Eye Patch McCain" and more, the above article shows just how far off the rails the GOP has gone.

It is no longer an existential threat.

Every conservative running for office and claiming the mantle of sanity, including bloggers, should be made to answer whether he/she agrees with these views. And then if they don't, they should be called on to stand up for their convictions and condemn the views expressed by the Texas, our largest GOP state, GOP.

1. The whole Texas GOP platform is insane but the piece that jumped out to me was the endorsement of a state-level electoral college, eliminating one person-one vote in favor of a system they could gerrymander so that the votes of white rural Republicans will count more.


2. This is not the first time this has come up. Not long ago a Colorado GOP governor candidate offered such a plan; an analysis found it would give 2,000 voters in three rural counties twice as many electoral votes as 761,000 voters in three urban counties.

3. This is a road test: Does the base like this? How much blowback does it get? Based on the results, more and more Republicans will probably start advocating the same thing in their states.

4. The GOP is now in a stage of radical experimentation. They're feeling so empowered that they're throwing around ideas that two years ago they'd never have spoken aloud because they're so radical. Now there are literally no limits.

5. Eliminating democracy is THE KEY to every other ideological goal. If you can engineer the system so you always have power no matter what, the voters can't stop you and all your darkest fantasies can be realized.

6. They're still figuring out the shape of this new program; calling it 21st century fascism isn't totally inaccurate, but we may need a new word to describe it. Either way, it's impossible to overstate how dangerous it is.

The GQP is not a political party these days - it's a cult of hate filled morons. We must vote these people out of power, folks.

Keith Barber, Lifelong Republican who understands that Trump is the greatest threat to our democracy in his lifetime:

What if I told you that the Republican Party, in one of America’s largest states, supports the right of convicted felons to own and freely carry, absolutely anywhere they want, machine guns? Actually it goes far beyond that. Said absolute right to machine guns would also apply to those found mentally incompetent, drug abusers, people dishonorably discharged from the military, spouse abusers, and even (believe it or not) illegal aliens.

Don’t believe such a thing could be true? Take a gander at the Official Platform of the Republican Party of Texas. § 32 (p. 6) states:

State and Federal Legislatures shall: Repeal and/or nullify the National Firearms Act of 1934 and the Gun Control Act of 1968.

The Firearms Act of 1934 is the law that generally bans machine guns and fully automatic weapons (such as our military’s M-16) in our society. It was passed in reaction to the rise of the “Tommie Gun” as the weapon of choice for mobsters who were outgunning police. The Gun Control Act of 1968 is what bans convicted felons, mental incompetents, and the other groups mentioned from owning or possessing guns. In the Texas GOP’s America, those laws would be gone.

In addition, per § 227 (p. 32) there would be no gun free zones, anywhere. Not schools, not church, not movie theaters, not grocery stores. Nowhere. Per the platform the right of “Constitutional Carry” is completely “unrestricted” and the power of any legislature to “to regulate the wearing of arms, with a view to prevent crime” would be completely stripped.

I feel for Rep. Adam Kinzinger as he receives what those of us in the LGBTQA+ community have experienced for decades. This is his first which is always the hardest. I remember like it was yesterday thinking why do you hate me just because I exist?

Not talked about is the Christian Nationalist thread stringing together all the deplorable behaviors. It's in the funding, the think tank talking points, and the rhetoric of returning the country to a state which only exists in the nationalists fevered mind. Their well orchestrated plan to take over the USA might still succeed, although I and many others are doing everything in our power to see their well laid plans oft go awry.

What I do trust is love, meaning what was once automatically a cause for shunning is now an opportunity for conversation. It's holidays and anniversaries, grandchildren and partners, and so much food. It's not a huge 'everyone is doing this' movement but instead it's one family at a time addressing the challenges in front of it and choosing to prioritize their child's happiness over what the hatemongers in the pulpit are preaching.

Of course we still have Christian Nationalists as I don't see them ever going away to be honest. What I do see though is their influence lessening as parishioners decide to worship elsewhere. The numbers are promising. It is true - Love is all we need.

This is a rough patch and like all hard times we humans tend to dig deep to be our best selves. And CAST A VOTE!!!! We can do this but only if we get off our duffs and (again for the crowd in the back) VOTE! The alternative is clear. VOTE.

Let me get this straight. If Texas secession happens, they lose their 38 electoral college votes, their 2 senators, and their 36 members of the house. And they are on their own for social programs. Including defense. Which may be interesting to Mexico.

And the current GOP team in the US Senate, including McConnell, Cruz, Hawley and more should be made to step up and disavow him, his ad and his candidacy.

If anyone should be canceled in the US, literally days afters more than 2 dozen innocent people were shot dead by GOP supporting, armed killers, it's Greitens.

His decision to pour salt in the wounds of AMERICANS hurting after the recent shootings shows he is unfit to serve in the US Senate, what some used to call the greatest deliberative body in the world.

I did not know, in all my 62 yrs, that I could detest another human being as I do him & his army of treasonous filth.

Keeping my fingers crossed that texas try's to succeed from the DSA (divided states of america) and that the government allows them to do so. However, this insidious cancer continues to grow and has taken on a very dangerous life of its own.

America was never really exceptional. Other than in its own view of reality. Texas as well as some others continue to show just how unexceptional the USA really is today.