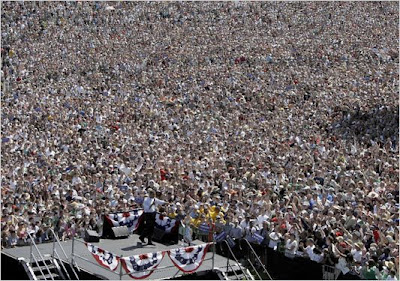 Oregon newspapers reported that Senator Obama attracted the largest crowd for a presidential candidate in the history of the state.

Well done, Senator Obama!
And this:

"As if the Republican prospects for the fall elections were not bad enough, it now seems the Republican Party has been asked to bail out John McCain's deficient fund raising. And what's more insulting, McCain and the Republicans intend to rely on George Bush, the most unpopular President since Richard Nixon, to put the squeeze on lobbyists to replenish their coffers."

h/t Scarecrow at FDL
Posted by Shaw Kenawe at 4:45 PM

You know, it's satisfying to see the McCain-Feingold rape of free speech come back to bite the Senator from Arizona right in the ass.

By the way, is that a campaign rally for Obama or a revival?

I think it's both. A huge campaign rally AND a revival of the Democratic Party.

You and your buddies over at Mike's America will never admit that Obama has tapped something in the American spirit.

No recent politician has brought out the crowds like this guy.

If he were one of yours, you'd be crowing about it, too.

You have a point. I'm just wondering how long the love-in will continue, that's all.

The love-in continued with Reagan, and he is revered in the Republican party to this day, despite the fact that he and many in his adminisstration commited crimes by dealing arms for hostages.

The Republicans are willing to overlook that black mark on his presidency.

Obama has yet to be elected. No one knows what will happen in a presidency, or how a president will react to unforeseen events.

I have confidence in Obama's intelligence and his ability to choose good people to serve in his administration.

I've said this before, but you guys ignore it as evidence.

Barack Hussein Obama came out of nowhere, has a name that makes small-minded people nervous, challenged and will probably win the nomination by denying it to one of the most prominent and powerful politicians in the country--Hillary Rodham Clinton, who in turn had a popular ex-president campaigning for her!

That is a phenomenal accomplishment. Only an extremely talented, astute, disciplined person could do that.

Plus, I'm reading more about Lincoln. He had less experience--far less--than Obama, but Lincoln had an incisive mind and was perceptive in his judgement of people.

He's not perfect. What president has been? None.

But he is a magnitude better than the embarrassment we've had for the last 7 1/2 years.

I give full credit to Obama for his meteoric rise. That is a great accomplishment.

However, I'm going to be asking this a lot, and trying to answer it myself: What will he do if and when he becomes president?


He's not perfect. What president has been? None.

That's because I haven't been elected yet.

We don't know exactly what Obama will do when he is elected.

George Bush declared in debates when he was campaigning for the presidency that America shouldn't be involved in nation building, he also promised to keep the ban on machine gun-type weapons.

He reversed himself on both of those issues once he became president.

And I would hope that when you are president, you will be mindful of the fact that one can promise many things and lay out one's political philosophy in a campaign, but that doesn't necessarily mean world events will not reshape those things.

PS. Have you read that Israel's PM, Olmert has begun talks with Syria?

Israel is talking with a terrorist state.

...he also promised to keep the ban on machine gun-type weapons.

Ok, what are you talking about?

Now as for events shaping a presidency:

Yes, presidents have to be able to change a strategy or position when necessary. It doesn't necessitate changing the underlying philosophy. The nation-building that you mention was a necessity when we cleaned out the governments of Afghanistan and Iraq. In Afghanistan, that worked pretty well, but left the problem of the mountainous mess that is the Pakistan border.

In Iraq, the idea of a light footprint was the strategy that we began with. That didn't work. Bush's big mistake after we were committed was not correcting that sooner. However, the surge appears to be working. In fact, I'm confident we're now, finally, getting closer to pulling the majority of troops out of there.

By the way, if I manage to get that far, you'd vote for me, wouldn't you?

Vote for you? Hell, I'll manage your friggin' campaign! I have family ties in Ohio.

The federal law banning the sale of semi-automatic assault weapons, known as the federal assault weapons ban was passed as part of the Violent Crime Control and Law Enforcement Act of 1994. President Clinton signed it into law on September 13, 1994.

Despite his promise to renew the ban, President George W. Bush and Congress allowed the ban to "sunset" in September of 2004.

It was politically convenient for Bush to break this promise.

And he paid no political price for being a usual politician in doing so.

He needed the NRA vote in the 2004 election.

Politics is a nasty business.

This rally is truly inspirational.