MORE ON THE REPUBLICAN LIE THAT THIS ADMINISTRATION SUPPORTS THE TROOPS 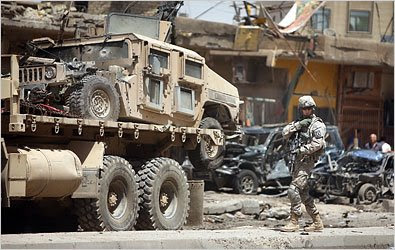 President Bush, the most unpopular president in post-WWII history, will have this stain on his record. He and his spokespeople give lip service to the men and women who fight his war on terror. But when those men and women come home, they're treated in the most despicable and dishonorable way.

The Republican chest-thumpers who try to out-love, out-support our troops are eerily silent. Shame on you all. While you're running around squawking about Obama's pastor [a retired Marine, btw] and tut-tutting about how Obama could have stayed in such a church, this country is neglecting the men and women who defend it.

The fact is that this Republican Administration and the Republicans in Congress are charlatans, who use their "Support the Troops" meme as a cudgel to beat up the Democrats and to imply that only they are patriotic and only they care about the troops. The conservative media have been silent over this scandal--preferring to endlessly play a tape that shows an unhinged pastor [who happens to be black, just like, y'know, Barack Hussein Obama] declaiming and ranting--because, really that issue is what matters in this election? Because what Barack Obama didn't say and didn't do is a serious subject, unlike the neglectful treatment of our returning soldiers from Bush's excellent adventure in Iraq.

I must have missed the endless playing of the tape that shows the filth and substandard housing the insufficient medical care our men and women come home to. Oh yeah. I missed that tape because the conservative media want to make sure you associate Barack Obama with a crazy black pastor.

Gates acknowledges mistakes in treatment of troops
By David Morgan


U.S. Defense Secretary Robert Gates on Thursday said the military had made mistakes in treating returning combat troops including in their physical and mental health care..."


Thursday said the military had made mistakes in treating returning combat troops including in their physical and mental health care and by providing some sub-standard housing.


In a visit to Fort Bliss, Texas, Gates announced a change in government procedures to encourage troops returning from Iraq and Afghanistan to seek treatment for post-traumatic stress disorder (PTSD) without fear of losing their security clearances and harming their careers.


The announcement came just a day after closing arguments in a San Francisco federal court case in which veterans allege the U.S. Department of Veterans Affairs is unable to deal with the growing number of PTSD cases emerging from the Iraq and Afghanistan wars.

Gates acknowledged not all of the more than 1.5 million military service members who have been deployed overseas have received needed medical treatment and accommodations.


"I know that the department is not perfect and mistakes have been, and will be made. Things happen too slowly," Gates said in a speech to a group of junior officers.

Things happen too slowly? Is that an excuse for the "Greatest Country in the World" for not treating its returning military with the greatest care?

No. There is no excuse for this.


BUT LOOK! OVER THERE! OBAMA'S PASTOR SAID "GODDAMN AMERICA!"

EXACTLY!! Well said and right on. I was pumping my fist in agreed while reading it. Keep up the work my friend.

And as for the media? I'm convinced that most of them suck babies blood to feed on.

Shaw: Somehow you manage to tie two unrelated stories together here. How discussions on the character of a presidential candidate and the failings of the current administration are related at this time I don't know.

But this story will get traction, and unlike the antiwar rants, this will really piss all of us off. And in the end, this could be the blackest mark of them all on the Bush administration's record.

So whoever makes it out of the Democrat convention the least "BLOODIED UP" (smile, you know you love it) would do well to take this issue and run with it.

Wonderful: You're probably right about the media.

Let me explain why I tied the two stories together.

I was pointing out how the media, NOT the Bush Administration, endlessly harangue us on the Rev. Wright story, and of the two stories that were in the news this past week, the Rev. Wright got played up the most.

Not the one about our returning troops.

I brought in the Bush Administration because it is they and its followers who claim to care for and support the troops.

If that is accurate then 1) why did the Bush Administration allow this deplorable situation; and 2) where is the Republican Noise Machine, i.e., Hannity, O'Really, Rush, on this story??

Should only the Democrats care about how our troops are being treated?

Two stories: Only one--the one about the black pastor--got ALL THE ATTENTION FOR THE LAST MONTH.