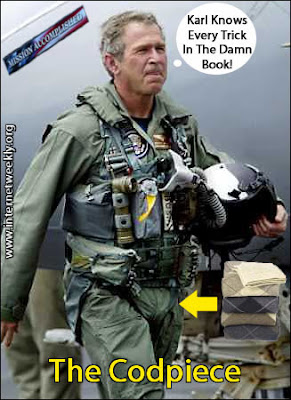 Five years ago, George W. Bush landed on the USS Lincoln, a few miles off the coast of San Diego, in a cheap, narcissistic stunt, (probably dreamed up by dirty political hack and known liar, Karl Rove) and announced that major combat operations in Iraq were over, while behind him, printed on a very large banner, was the phrase "Mission Accomplished."

I remember watching that performance and being embarrassed for my country.

What sort of president, I thought, would so shamelessly promote himself in this crass "Top Gun" type of self-aggrandizement in a time of war? Could anyone imagine a real military hero like, say, President Eisenhower, cheapening his office and himself in such a manner?

War is deadly serious. People die. Lives are ruined forever. Instead of a sober, measured talk with the American people about the status of the Iraq War at that time, we were subjected to base egoism by a man who never faced combat or the dangers of war himself.
But many Americans were impressed and awed by this loathsome gesture, contrived to be used in the 2004 elections when the gullible public would mistakenly associate Bush (who chose not to go to Viet Nam--a war he believed in and supported) with heroism in wartime.

Well, we all know how that worked out.

Over the years, we have tragically learned that the Bush Administration is quite competent at staged empty gestures and the promotion of failed programs and grossly incompetent in running a government in a time of war and natural disasters.

It says a lot about Bush's character that he didn't have a sense of the dignity of the office of the president of the United States to tell Karl Rove to stuff it when he came up with this harebrained piece of political theater, that he didn't have the sense to understand that war-time presidents are supposed to be serious minded leaders, not play-actors who prance around flight decks, showing off for future political ads and pandering to an easily exploitable electorate.

I didn't think Bush could sink any lower in that act of vulgar manipulation. But that was in May 2003. I have since, sadly, learned otherwise.
Posted by Shaw Kenawe at 11:53 AM

I'm just curious if you were saying the same thing during the Clinton Administration?

Because that's where the photo-op politics really took hold.

I am not, nor have I ever been in the past, a Clinton worshipper.

Unlike some conservatives [I do not mean you], I see the flaws in politicians, Dems and Repubs, and understand that politics is intrigue and maneuvering in order to gain control or power. Partisan politics (the worst) is often an obstruction to good government.

I don't remember anything as cynical and crass as the USS Lincoln stunt that Bill Clinton did when he was president.(And that says a lot, because Bill Clinton is quite a narcissist himself.)


People who faced real combat and real danger in war time (at least the ones I know), cringed when they saw that stunt.

Bush was too dumb to see what an insult his little "Top Gun" play-acting was to people whose lives were changed forever by real war. I'm sure he loved the idea of passing himself off as some brave Commander-in-Chief, or military hero (which he never was.)

Karl Rove knew exactly what he was doing--give Bush the veneer of a war hero, then announce that the Iraq war is over.

But like Karl, Bush and their values, it was just that--veneer--fake, and ultimately a failure.

Okay, agree with the mission not accomplished bit... The pic is a low blow (no pun intended). For those that have worn a F/W harness you know the deal. You get a bit bunched up in one particular area.

I grabbed the pic from the net because I liked what it said in the balloon.

The codpiece part, not so much.