SUPPOSE THEY GAVE A BUSH-MC CAIN FUNDRAISER AND NOBODY SHOWED? 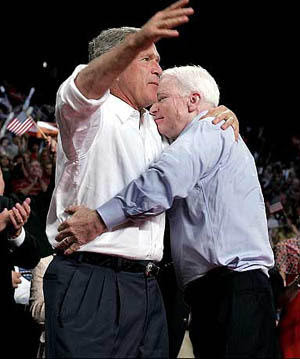 Poor ticket sales, expected protests scuttle Bush-McCain fundraiser at Phoenix Convention Center
Phoenix Business Journal
Friday, May 23, 2008
by Mike Sunnucks
A Tuesday fundraiser headlined by President Bush for U.S. Sen. John McCain's presidential campaign is being moved out of the Phoenix Convention Center.
Sources familiar with the situation said the Bush-McCain event was not selling enough tickets to fill the Convention Center space, and that there were concerns about more anti-war protesters showing up outside the venue than attending the fundraiser inside.
Another source said there were concerns about the media covering the event.
Bush's Arizona fundraising effort for McCain is being moved to private residences in the Phoenix area. A White House official said the event was being moved because the McCain campaign prefers private fundraisers and it is Bush administration policy to have events in public venues open to the media. The White House official said to reconcile that the Tuesday event will be held at a private venue and not the Convention Center.
Convention Center personnel confirmed the event has been canceled at their venue.
Tickets to the event were to range from $1,000 to $25,000 for VIP treatment. Money was to go toward McCain's presidential bid and a number of Republican Party organs.
Anti-war protesters were planning to be out in force. President Bush's job approval rating stands at 31 percent, according to RealClearPolitics.com.

The McCain campaign referred questions on the fundraiser change to the White House press office.
Posted by Shaw Kenawe at 1:36 PM

The only thing that can save McCain at this point is Clinton stealing the Democratic nomination via a superdelegate scam.

I don't think that's going to happen. Only Hillary and her delusional followers believe she'll be the nominee.